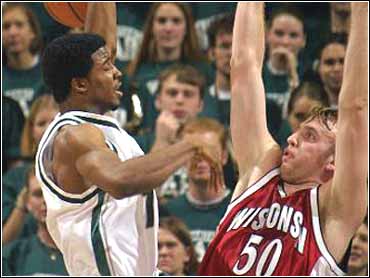 Jason Richardson's four 3-pointers, spectacular alley-oop dunk and 25 points would have meant nothing if Charlie Bell had not made two key plays Saturday night.

Bell came through at both ends of the court as No. 3 Michigan State rallied from a five-point deficit in the final minute of regulation and beat No. 17 Wisconsin 69-59 in overtime in a rematch from last season's Final Four.

"I was never worried that we were going to lose," Bell said after the defending national champion Spartans (14-1, 3-1 Big Ten) extended the country's longest home winning streak to 39 games.

After Wisconsin's Mike Kelley missed the front end of a one-and-one at the line, Bell, who had missed three consecutive 3-pointers, made a shot from beyond the arc to tie the game at 57 with 28.5 seconds left.

Bell forced Wisconsin's Mark Vershaw into a contested 10-foot shot with about two seconds left, and the game went to overtime, where Michigan State outscored Wisconsin 12-2.

Michigan State coach Tom Izzo didn't hesitate to continue calling on Bell to shoot 3-pointers at the end of regulation, and Izzo didn't complain when Bell tossed Richardson an alley-oop pass with a three-point lead and less than a minute left in OT.

Izzo believes Bell is one of the most underrated players in the country. Only Bell and Monmouth's Rahsaan Johnson are averaging 15 points, five rebounds and five assists.

Bell, Andre Hutson and Zach Randolph each scored 10 points for Michigan State, which has won seven consecutive games against Wisconsin.

Roy Boone led the Badgers with 22 points, and Vershaw added 18.

Kelley held his head low as he walked to Wisconsin's bus, knowing he might have sealed the victory by making two foul shots with 48.5 seconds left in the fourth quarter.

"I let my teammates down," Kelley said. "That's the bottom line."

The first half didn't look at all like the four gritty, low-scoring games the two teams played last season, all of which were won by Michigan State including a 53-41 victory in the NCAA semifinals.

Shots were made, plays were executed and a player could run without fear of a flying elbow.

The Badgers made six of their first seven shots and led 17-9 at the 14:34 mark. That was as many points as they scored in the entire first half of last year's national semifinal, when they trailed the Spartans 19-17 at the break.

The second half, though, looked more like last year's games, with the emphasis on defense.

"Their defense was excellent late in the game," Wisconsin coach Brad Soderberg said. "I think they got juiced up by their crowd, which is part of the beauty of a great home-court advantage."

Izzo was relieved to win.

"I had confidence we could come back," he said. "But that's a tough team to come back against. It's almost like a double win."