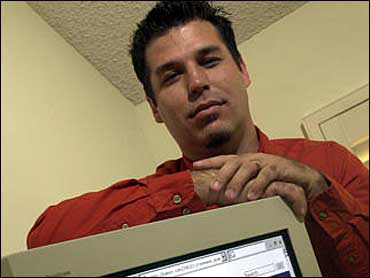 Recently, his site has been getting remarks like "Thanks for the information!" and "Sounds great!" They're not from supporters, but from people - or machines - who leave names like "Generic Viagra," "Online Gambling" and "Free Poker" and links to unsavory sites.

Spam has never been limited to e-mail. But now, commercial pitches are increasingly popping up in online chats, instant messages, cell phones with text messaging and, as Kalsey found, Web log comments.

Spammers are flocking to new communications tools like moths to light, threatening to cripple these tools just as they are beginning to take off.

Howard Rheingold, a futurist who predicts always-on communication will revolutionize public discourse, is worried that all these new forms of spam could freeze the revolution in its tracks.

"It forces you to either turn off the comments and lose some of the value of the medium, or spend your time deleting spam," said Rheingold, who runs his own blog.

Today, most of the attention of lawmakers has been on e-mail spam, which is estimated to comprise nearly half of e-mail traffic. Attempts to write broader laws have not succeeded, and might whittle away at free speech.

"We ought to be legislating general concepts - things like, you can't market to somebody who's asked you not to," said David Sorkin, a professor who studies spam laws at John Marshall Law School. "But in the case of spam in particular, that hasn't really worked."

It's possible legislation targeting unwanted e-mail could be used to fight other unwanted communication; text messages on cell phones often originate from e-mail. Laws limiting telemarketing also might be useful.

But that assumes the legislation will work, and that spammers won't move outside the law.

Kalsey, a Web consultant who lives near Sacramento, Calif., has taken matters into his own hands. In fact, many of his comments of late have focused on combating Web log spam, including the creation of a "Comment Spam Manifesto."

"What you failed to understand is that bloggers are smarter, better connected and more technologically savvy than the average e-mail user," it reads, addressing the spammers. "We control this medium that you are now attempting to exploit. You've picked a fight with us and it's a fight you cannot win."

Working from the theory that blog spam can be combated like real-world graffiti, Kalsey tried deleting messages as fast as they appeared. That worked for a few weeks but the volume has recently been increasing.

Now he's tracking down those who leave the comments, collecting evidence and reporting them to their Internet providers and domain registers so their accounts can be canceled. If it sounds like a lot of work, it is. Fortunately, help from others is available.

"The blog immune system does seem to be responding," said Kalsey. "People are coming up with collective solutions like black lists for spammers. If one person gets spammed, then all the others who use that software can ban them."

Most of today's comment spam doesn't urge someone to click on the link. Rather, it's posted to boost a site's position on search engines. Web crawling software robots released by search engines notice keywords and links, and that information is used to determine relevancy.

Cell phone carriers and providers of instant messaging services, meanwhile, are finding that their spam problems can be much more disruptive to workflow.

For IM, spam is growing just as the technology jumps from personal to business communications. To address the problem, companies are blocking messages from outsiders, instituting "white lists" of accepted contacts or not allowing IM at all.

"In (corporate) instant messaging, we're doing more of a closed approach than what we were seeing with e-mail," said Paul Judge, chief technology officer of the antispam firm CipherTrust Inc. and co-chair of the Anti-Spam Research Group.

America Online, the largest instant-messaging provider, has a number of roadblocks in place to halt spam IM, or spim. Among other things, a software sentry looks for spammers - automated or in-the-flesh - who try to send multiple messages simultaneously to many people, said spokesman Nicholas Graham.

Cell phone text message spam can be even more disruptive - and expensive.

Some Nextel Communications cell phone subscribers recently got a 3:30 a.m. message urging support of the workers in the southern California grocery strike. Another spammer urged a vote in favor of recalling California Gov. Gray Davis.

Aside from early morning annoyance, some plans charge for each message sent or received. Nextel, which last month installed a filtering system, offers refunds to any customers who complain.

"All the carriers have been hit with situations like this," said Nextel spokeswoman Mila Fairfax. "Each carrier has applied a filtering system to try to flag messages that appear suspicious to our system."

"We will be going after (spammers) to the furthest extent of law," Fairfax said. "Anything we can do, we will do."