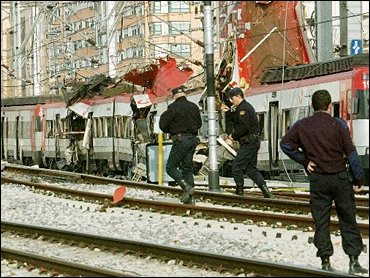 The Spanish government will ask Italy to extradite an Egyptian considered one of the masterminds of the Madrid train bombings, Spain's deputy prime minister said Friday.

The request came from investigating magistrate Juan del Olmo, who is leading the probe into the March 11 attacks.

The railway bombings killed 190 people and injured more than 2,000 and were blamed on Islamic militants with possible links to al Qaeda.

The judge's extradition request alleged that while living in Madrid, Ahmed "managed to take control of a small group of Arab followers, all of them with extremist Islamic ideology, supporters of jihad (holy war) and Osama bin Laden."

"Later, these individuals ended up involved, to differing extents, in the terrorist attacks of March 11 in Madrid," the judge wrote.

Spain's Foreign Ministry will forward the extradition request in the next few days to its embassy in Rome, which will present it to the Italian government, officials said.

Ahmed was arrested Monday in Milan, Italy, on the basis of information from Spanish authorities, who consider him a key figure in the planning of the Madrid bombings and in the structure of al Qaeda in Europe.

They say he is an expert in explosives who was mentioned several years ago in a police probe of Islamic extremism in Spain but dropped out of view in 2002.

Del Olmo's arrest warrant for the Egyptian accuses him of 190 counts of murder and 1,400 of attempted murder.

Spanish investigators are eager to interrogate Ahmed. Other ringleaders were among seven suspects who blew themselves up on April 3 as special forces moved in to arrest them in an apartment outside Madrid, the government says.

Authorities say Ahmed was a close associate of one of the seven, the alleged ideological mastermind of the attacks, Tunisian Serhane Ben Abdelmajid Fakhet.

Spanish authorities have charged 20 people in the Madrid bombings, most of them Moroccans, and blamed Islamic militants with possible links to al Qaeda.

Six Spaniards accused of helping supply the dynamite used in the attacks were arrested Wednesday.

Ahmed was arrested as part of a coordinated operation in Europe that also brought in 15 people in Belgium. Some of the suspects picked up in Belgium were believed to have taken orders from Ahmed.

On Thursday, an Italian judge questioned Ahmed for the first time since the arrest, but he refused to speak. Also questioned was a suspect picked up with him, a 21-year-old Palestinian identified as Yahia Payumi, who denied any wrongdoing.

The judge upheld the suspects' arrest, and prosecutors were scheduled to question them Friday. The suspects are accused of involvement with international terrorist groups, a charge that was introduced in Italy after the Sept. 11, 2001, attacks in the United States.