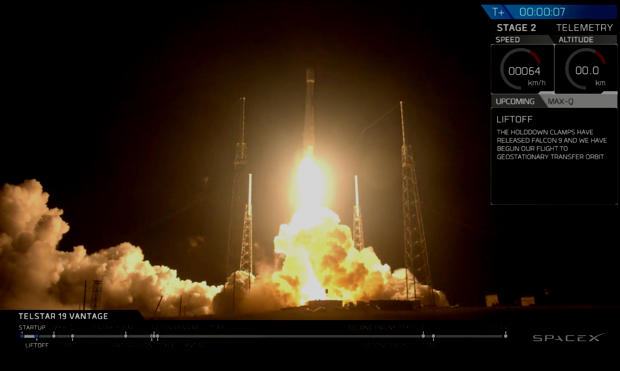 Lighting up the deep overnight sky, a SpaceX Falcon 9 rocket roared away from Cape Canaveral early Sunday, boosting a heavyweight communications satellite into orbit while its upgraded first stage booster flew itself back to a pinpoint landing on an off-shore droneship.

Earlier versions of the Falcon 9 first stage likely would have been unable to attempt a landing given the Telstar 19 VANTAGE satellite's high-altitude orbit and record weight -- 15,600 pounds -- but the "block 5" version of the booster, featuring more powerful engines, structural upgrades and other improvements, had no obvious problems.

The block 5 debuted in June, along with an upgraded version of the rocket's second stage. Sunday's flight was the second for a block 5 first stage and the fourth for the upgraded upper stage.

It is now SpaceX's go-to rocket, with another rapid-fire launch on tap Wednesday with a different Falcon 9 to boost 10 Iridium NEXT satellite telephone relay stations into orbit from Vandenberg Air Force Base, Calif.

SpaceX founder Elon Musk says block 5 boosters should be able to fly 50 to 60 times with minimal refurbishment between flights, a key element in the company's drive to lower launch costs and capture a larger share of the commercial launch market.

But as dramatic as the booster recoveries are, the primary goal of Sunday's flight was to place Ottawa-based Telesat's Telstar 19 VANTAGE satellite into a highly elliptical orbit with a presumed high point of more than 20,000 miles and a low point of less than 200 miles.

To get there, the 229-foot-tall Falcon 9 blasted off at 1:50 a.m. EDT (GMT-4) and quickly climbed away from launch complex 40 at the Cape Canaveral Air Force Station atop 1.7 million pounds of thrust.

Rapidly accelerating as it consumed its load of propellants and lost weight, the rocket arced away to the east over the Atlantic Ocean trailing a long jet of fiery exhaust visible for miles around.

The nine Merlin engines powering the first stage out of the dense lower atmosphere shut down two-and-a-half minutes after liftoff. The second stage took over at that point, firing its single engine to continue the climb to space.

The first stage, meanwhile, began its landing sequence, firing three of its engines to slow down before atmospheric entry as it followed an arcing, ballistic trajectory toward the drone ship "Of Course I Still Love You" stationed several hundred miles east of Cape Canaveral.

Using so-called grid fins at the top of the booster to maintain its orientation, the rocket re-started a single engine as it neared the drone ship, deployed four landing legs and settled to a picture-perfect touchdown on the landing deck.

It was the 26th successful Falcon 9 booster recovery, 14 on drone ships and 12 on land at the Cape Canaveral Air Force Station.

Touchdown occurred a few seconds after the Falcon 9's second stage engine shut down on reaching a preliminary orbit. After a second burn about 18 minutes later, the Telstar 19 VANTAGE satellite was released as planned into its geostationary transfer orbit.

On-board thrusters will be used to circularize the orbit at an altitude of 22,300 miles above the equator where satellites take 24 hours to complete one orbit and thus appear stationary in the sky. The relay station is expected to enter service at 63 degrees west longitude in late August.

"Telstar 19 VANTAGE is a state-of-the-art high-throughput satellite that will be co-located with our Telstar 14R satellite to expand our services over the Americas, the Caribbean and the North Atlantic," Dan Goldberg, president and CEO of Telesat, told Spaceflight Now. "The satellite has a mix of Ka- and Ku-band capacity.

Telesat hopes to follow up Sunday's launch with a second Falcon 9 flight in August to boost the Telstar 18V relay station into orbit.