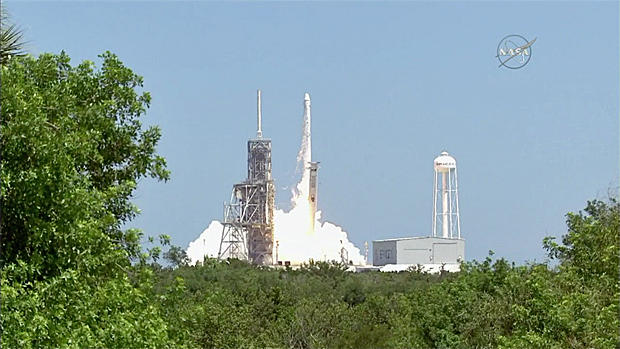 A SpaceX Falcon 9 rocket thundered to life and shot away from the Kennedy Space Center Monday, sending a Dragon cargo ship loaded with more than three tons of equipment and supplies on its way toward the International Space Station.

The booster's first stage, meanwhile, flipped around moments after separation, restarted three of its nine engines and flew itself back to Florida, descending on a jet of fiery exhaust to a pinpoint touchdown at the nearby Cape Canaveral Air Force Station.

Getting spent booster stages back is a key element in SpaceX founder Elon Musk's drive to lower launch costs by recovering, refurbishing and relaunching Falcon 9 components.

With Monday's landing, the company's record now stands at 14 successful first-stage recoveries in 19 attempts -- the last 10 in a row -- with six ending at the Air Force station and eight on offshore droneships.

But the landings, as important as they are to SpaceX's business model, are a strictly secondary objective. The primary goal of all Falcon 9 flights is to put the payload into the proper orbit, and for Monday's flight, that meant boosting the Dragon cargo ship onto the proper trajectory to rendezvous with the International Space Station.

As with all rendezvous missions, the launch was timed for the moment Earth's rotation carried historic pad 39A -- and the Falcon 9 -- into the plane of the station's orbit, a requirement when it comes to catching up with a target moving at an orbital velocity of 5 miles per second.

The station passed over the Kennedy Space Center a few minutes before the Falcon 9 took off and was well away to the northeast when the rocket began its chase at 12:31:37 p.m. EDT (GMT-4). The ascent went smoothly and the Dragon was released from the Falcon 9's second stage a little more than 10 minutes after liftoff.

If all goes well, the Dragon will execute an autonomous rendezvous, pulling up to within about 30 feet of the lab complex Wednesday morning and then standing by while astronaut Jack Fischer, operating the station's robot arm, locks on so the capsule can be pulled in for berthing.

"We've loaded Dragon with 6,400 pounds of cargo, and I'm happy to say 75 percent of that total mass is headed toward our research community," said Dan Hartman, deputy manager of NASA's space station program. "It sets a new bar for the amount of research we've been able to get on this flight."

Packed inside the Dragon's pressurized cabin, the part of the spacecraft accessible to the station crew, are 3,646 pounds of crew supplies, space station hardware, computer gear and research equipment and samples, including 20 mice that are part of a study on the long-term effects of weightlessness.

Also on board: ice cream treats for the station astronauts, packed inside freezers being sent to the station to store experiment samples.

Mounted in the Dragon's unpressurized trunk section is a cosmic ray detector known as CREAM -- Cosmic Ray Energetics and Mass -- that previously logged 191 days aloft during a half dozen high-altitude balloon missions.

It will be pulled out of the trunk by the station's robot arm and mounted on a shelf outside the Japanese Kibo lab module where it will spend the next three years studying high-energy cosmic rays and how they trigger cascades of particles during collisions with atoms and molecules in the upper atmosphere.

This is the 12th operational station resupply mission carried out by SpaceX. The company holds contacts valued at more than $2 billion for 20 space station resupply flights and a $2.6 billion contract with the space agency to build and launch a piloted version of its Dragon capsule to ferry astronauts to and from the lab complex.