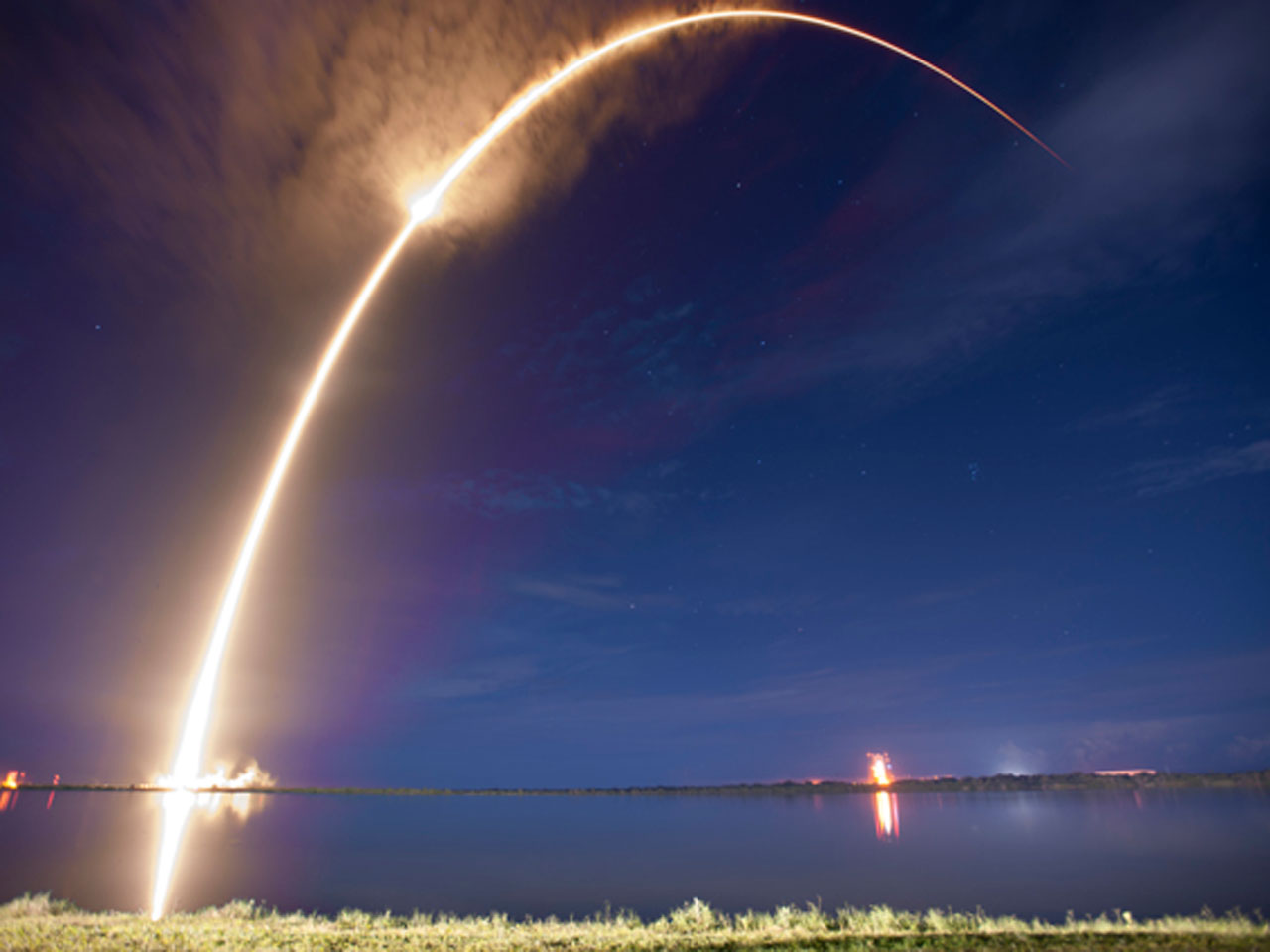 A SpaceX Falcon 9 rocket thundered to life and vaulted into space early Sunday, boosting a commercial communications satellite into orbit for the Hong Kong-based Asia Satellite Telecommunications Co., the second AsiaSat relay station in a row to be launched by an upgraded Falcon 9.

Running 10 minutes late to give clouds more time to dissipate, the 224-foot-tall rocket's nine Merlin 1D first-stage engines ignited with a brilliant burst of orange flame at 1 a.m. EDT, throttled up to full thrust and quickly pushed the booster away from launch complex 40 at the Cape Canaveral Air Force Station.

After an initially vertical climb out, the slender rocket tipped over to the east on computer command and raced toward space through thin clouds, rapidly shedding weight and accelerating as it consumed the first stage's load of liquid oxygen and kerosene rocket fuel.

The Merlin engines shut down about three minutes after liftoff, the spent first stage fell away and the Falcon 9 second stage's single Merlin engine fired up to continue the climb to orbit. An onboard "rocketcam" showed the engine nozzle glowing bright orange as the rocket streaked toward space.

Two second stage "burns" were required to put AsiaSat 6 into an initially elliptical orbit with a low point, or perigee, of around 115 miles and an apogee, or high point, of 22,230 miles. The satellite was released from the second stage about a half hour after launch and AsiaSat engineers successfully contacted the spacecraft shortly thereafter.

The flight plan called for on-board thrusters to fire over the next few days to circularize the orbit at 22,300 miles above the equator where communications satellites take 24 hours to complete one orbit and thus appear to hang stationary in the sky.

This was the second launch in just four-and-a-half weeks for SpaceX and the Asia Satellite Telecommunications Co., or AsiaSat, following the successful launch of the AsiaSat 8 relay station on Aug. 5. The AsiaSat 6 mission, including the satellite, rocket and insurance, was valued at $190 million.

SpaceX originally planned to launch AsiaSat 6 on Aug. 26, but the flight was put on hold after an experimental rocket used to test landing techniques at the company's McGregor, Texas, flight facility suffered an engine failure that triggered the vehicle's self-destruct system.

The test rocket was a modified Falcon 9 first stage powered by 3 Merlin 1D engines. Reviewing telemetry, engineers concluded the engine problem likely was caused by trouble with a single sensor.

Operational versions of the Falcon 9 utilize the same engine -- nine in the first stage and one in the second -- but multiple sensors are in place along with more robust computer control software. Company officials said a similar failure would have no impact on an operational mission and there were no signs of any trouble during Sunday's flight.

The back-to-back rapid-fire launchings marked a first for AsiaSat.

AsiaSat 8 included both C-band and Ku-band transponders for broadband service and direct-to-home television while AsiaSat 6 is equipped with 28 C-band transponders that will be shared equally by AsiaSat and Thaicom Public Co.

AsiaSat 8 was expected to go into service around Sept. 1 following several weeks of tests and checkout. AsiaSat 6 is expected to follow suit in early October.

"It takes a few days to do orbit-raising and get all the antennas deployed," Wade said. "Then once all the deployments are done and everything is ready to go through in-orbit testing, we'll test all the transponders and subsystems. That usually takes a little less than 30 days. Once that's done, then it will come online."

SpaceX hopes to follow up its back-to-back commercial launches with a space station resupply mission, the company's fourth flight under a $1.6 billion contract with NASA that calls for 12 flights to deliver some 44,000 pounds of cargo to the orbiting lab complex. Launch is targeted for Sept. 19.