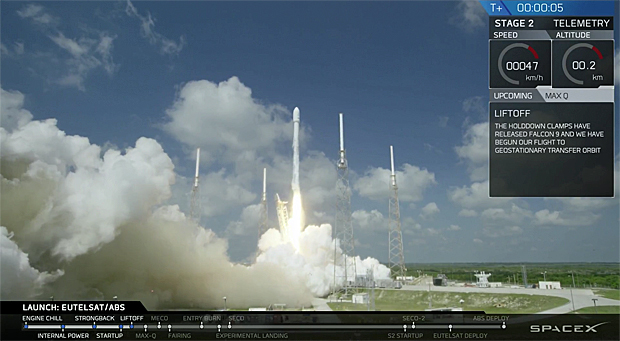 SpaceX launched a pair of communications satellites atop a Falcon 9 rocket Wednesday but a now-familiar attempt to recover the booster's first stage was unsuccessful. The booster appeared to make it back to a SpaceX landing ship, but company founder Elon Musk tweeted the "booster rocket had a RUD on droneship."

"Looks like thrust was low on 1 of 3 landing engines," Musk said. "High g landings v[ery] sensitive to all engines operating at max." He added, "Upgrades underway to enable rocket to compensate for a thrust shortfall on one of the three landing engines. Probably get there end of year."

It was the California rocket company's fifth unsuccessful drone-ship landing after three straight successes, one in April and two in May. Including a successful landing at the Cape Canaveral Air Force Station last December, SpaceX's recovery record now stands at four successes in nine attempts.

"Landing video will be posted when we gain access to cameras on the droneship later today," Musk tweeted. "Maybe hardest impact to date. Droneship still ok."

But the landing attempt was a strictly secondary objective. The mission's primary goal, the launch of two powerful all-electric communications satellites, was a complete success and regardless of the loss of the first stage, company engineers expected to collect valuable data as they continue their push to make such landings routine.

The mission got underway at 10:29 a.m. EDT (GMT-4) when the nine Merlin 1D engines in the rocket's first stage ignited with a burst of brilliant orange flame, gulping liquid oxygen and kerosene rocket fuel.

Generating a combined 1.5 million pounds of thrust, the first stage quickly pushed the 229-foot-tall booster away from launch complex 40 at the Cape Canaveral Air Force Station, initially climbing straight up and then arcing away to the East over the Atlantic Ocean.

The first-stage engines burned for two minutes and 36 seconds, boosting the rocket out of the dense lower atmosphere before shutting down as planned. Seconds later, the first stage fell away to begin its high-speed plunge back to Earth while the single engine powering the second stage ignited to continue boosting the payload to space.

Mounted in a protective nose cone, one atop the other, were Eutelsat's 117 West B communications station and the ABS-2A comsat, both built by Boeing. The twin spacecraft feature electric ion propulsion systems, saving weight and allowing the pair to launch on a Falcon 9 at a reported bargain-basement price of about $30 million each.

The second stage engine had to fire twice to put the satellites into an initially elliptical "supersynchronous" transfer orbit, the first step toward reaching a circular orbit 22,300 miles above the equator where communications satellites take 24 hours to complete one orbit and thus appear stationary in the sky.

Both satellites were released from the Falcon 9's second stage about a half hour after launch and both will use their low-thrust but highly-efficient ion propulsion systems over the next several months to raise the low points of the transfer orbit and maneuver to their planned orbital stations.

The satellites, the third and fourth based on Boeing's 702SP design, feature 48 high-speed KU-band transponders and weigh less than 5,000 pounds each.

The Paris-based Eutelsat, which operates a fleet of 39 relay stations, plans to position its latest satellite -- No. 40 -- above the equator at 116.8 degrees west longitude, near the Eutelsat 117 West A spacecraft launched last year atop a Falcon 9, to strengthen video and data service across Latin America.

Asia Broadcast Satellite, with headquarters in Bermuda, will park its spacecraft at 75 degrees east longitude, near the ABS 2 relay station launched last year with Eutelsat's 117 A satellite, to provide direct-to-home TV and data service across Africa, Russia and south Asia.

Musk believes the ability to recover, refurbish and re-launch rocket stages is needed to dramatically reducing launch costs, possibly by 30 percent or more per flight. The company plans to re-launch the first of its "used" rocket stages later this fall, although the payload has not yet been identified.

Wednesday's landing attempt mirrored the previous three, with the first stage re-igniting three of its engines to slow down for atmospheric entry while using steering fins, or paddles, at the top of the rocket to maintain its orientation.

Plunging tail-first toward the SpaceX droneship, stationed some 420 miles east of Cape Canaveral, the engines fired again to quickly reduce the stage's velocity. A camera on the remotely-operated drone ship briefly showed black smoke and flame before cutting out. It was not clear from the video whether the rocket initially remained upright on its landing legs, tipped over or simply crashed to the deck.

"We had a successful launch," a SpaceX commentator said. "We did not have a successful landing, unfortunately. Again, this is all experimental. We're very excited for the day when it becomes regular. But clearly, we're not quite there yet."

Next up for SpaceX is launch of the company's ninth operational space station resupply mission on July 16. The flight originally was scheduled for later this month, but SpaceX requested a delay because of Falcon 9 processing requirements, availability of launch slots at the Air Force station and limitations on how long a Dragon cargo ship can remain docked at the station.