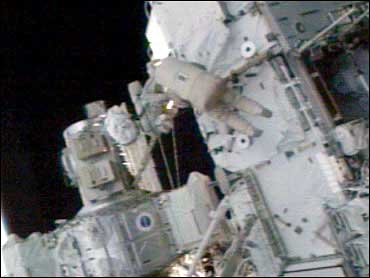 Determined to do better than last week, the international space station's two astronauts ventured back outside Wednesday on an unusually risky spacewalk and successfully replaced a bad circuit board.

Shouts of "hurray!" and "great!" emanated from space after American Mike Fincke and Russian Gennady Padalka learned their effort had paid off.

"We're glad to be able to be of service," Fincke said.

None of the anticipated communications gaps with the ground ever happened, reports CBS News Correspondent Peter King.

It was a long and potentially dangerous haul to the repair location. Fincke and Padalka had to cross nearly 100 feet to get to the fried circuit breaker — a grueling distance for spacewalkers over difficult terrain. Then they managed to pry off the cover for the row of circuit breakers; it was stiff and incredibly hard to move.

Last Thursday, they barely made it out the hatch when their spacewalk was aborted, just 14 minutes after it began. An oxygen-flow switch on Fincke's suit did not lock into the proper position and oxygen gushed out of his tank, prompting flight controllers to order the spacewalkers back inside.

NASA was anxious to replace the circuit board to restore power to one of the gyroscopes that keep the 225-mile-high outpost steady and pointed in the right direction. The circuit board conked out in April, leaving the space station with just two good gyroscopes, the bare minimum. The idled gyroscope checked out fine Wednesday night and was expected to back up and running within a day.

The spacewalk was considered riskier than most.

The space station is down to just two crew members, instead of three, because of the grounding of the shuttle fleet since the Columbia disaster. As a result, no one was left inside to watch over everything during the spacewalk — a situation NASA never tolerated until this year.

The men also used Russian suits not intended for this type of hand-intensive, U.S. repair work. A cooling failure in the space station's American spacesuits a month ago forced the switch to the stiffer, more-pressurized Russian suits.

After floating through the Russian hatch Wednesday, Fincke and Padalka cranked open an extendible boom to traverse the station, and made it to the work site all the way over on the U.S. side without incident about 1½ hours later.

Mission Control warned the men to take their time as they tried to pry off the circuit-breaker cover.

"I got it," Padalka said, breathing heavily.

Within minutes, they removed the old part and pushed in the spare. Flight controllers immediately ran a series of electrical tests and confirmed that the swap was good.

Using the Russian suits meant an exit from the Russian hatch — 80 feet to 100 feet from the broken circuit breaker — and an excursion over treacherous terrain, including antennas and jagged edges that could tear a spacesuit. The 50-foot extension boom helped close the gap, but the crew still had a considerable amount of hand-over-hand walking to do and an assortment of safety tethers

both Russian and American — to hook and unhook.

At one point, the cables were so numerous and dense that it sounded as though the spacemen were making their way through a jungle.

The spacewalk got off to a fast start. Fincke and Padalka were so eager to get the repair work done, after last week's aborted attempt, that they popped open the hatch almost a half-hour early.

Fincke and Padalka verified that the oxygen switches on both of their suits were in the right setting. Nevertheless, flight controllers kept asking the men for oxygen-pressure updates.

Mission Control also radioed up frequent precautions: "Make sure your hands don't get tired. And again: "We have plenty of time. Move slowly."

NASA expected the work to take longer and be more fatiguing because of the stiffer gloves and suits and because of the extra distance. Going out the U.S. hatch would have entailed a 30-foot hike.

The distance was so great that communication blackouts were anticipated; the spacemen planned to resort to hand signals, if necessary. But midway through the spacewalk, the radio links were holding up fine and the crew was well ahead of schedule.

Another first on this spacewalk: Prime responsibility for the job was divided between the two Mission Controls, in Moscow and Houston, depending on what side of the station the astronauts were on at any given moment.

The first shift in control came 50 minutes into the spacewalk and appeared to be seamless. It was obvious to anyone listening in; the conversation abruptly switched from Russian to English.