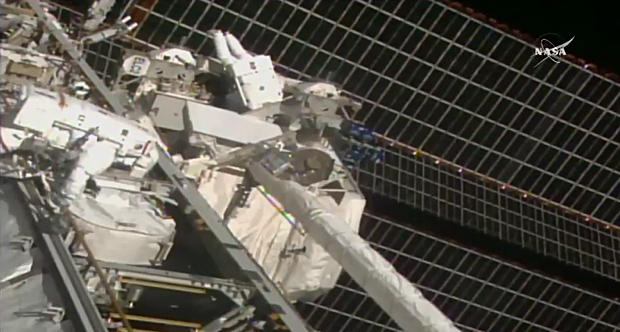 Two astronauts worked outside the International Space Station for six and a half hours Wednesday to reposition two spare solar array ammonia coolant pump assemblies, putting a failed unit, dubbed "Leaky," into long-term storage and attaching another, known as "Frosty," to an appendage of the lab's robot arm.

Later this week, arm operators at the Johnson Space Center in Houston plan to move Frosty to the P6 solar array segment at the far left end of the station's power truss where it can be plugged in for diagnostics. It will join yet another spare pump flow control sub-assembly, or PFCS, known as "Motley," that is already in place on P6.

The units are designed to help push coolant through solar array batteries to keep them from overheating. The appropriately named Frosty has been stored outside the station for nearly 20 years but it once was without heater power for an extended period and engineers are not sure if it's still a viable spare.

Motley was delivered to the lab complex by a SpaceX Dragon cargo ship earlier this year. As its name might suggest, it is made up of spare parts but it is fully operational and readily available if one of the eight operational PFCS units, one for each solar array set, fails.

But because the station uses eight PFCSs to cool all of the solar array batteries, NASA wants two operational spares available at all times and engineers want to find out whether Frosty is, in fact, operational. And that means they need to plug it in, turn it on and put it through its electronic paces.

Going into the EVA, Frosty was mounted on External Storage Platform No. 1 while Leaky was earlier attached to an appendage of the station's special purpose dexterous manipulator, or DEXTRE, a multi-joint hand-like fitting by the lab's robot arm.

Feustel and Arnold moved Leaky from DEXTER to Frosty's place on ESP-1 where it will remain in long-term storage. Frosty replaced Leaky on DEXTRE, clearing the way for flight controllers to move it out to the P6 solar array truss segment where it can be plugged in for power and telemetry.

"The purpose of a PFCS, a pump flow control subassembly, is all about the cooling of the batteries the space station holds its electrical power in," said Anthony Vareha, the spacewalk flight director at the Johnson Space Center in Houston.

"We've got the eight big solar arrays you've seen on space station, each of those has some batteries, we need to keep the batteries cool just like in your cell phone. We do that with an ammonia cooling loop. We pump the ammonia through a radiator and out through the batteries, cools them off."

More than 15 years ago, Frosty lost heater power because of an unrelated problem elsewhere in the station.

"As a result, the worry is that pump got a little bit cold and henceforth, it was named 'Frosty.' We are going to swap Frosty out to the shelf on P6 so we can plug it in, we can actually get data from it and make sure it is, indeed, a healthy pump. That tells us do we have a good spare there or not."

With the pump module relocation work complete, Feustel and Arnold replaced a standard definition camera, its light and its pan-and-tilt mechanism, an electronics box in the station's KU-band communications system and carried out several lower-priority "get-ahead" tasks.

The astronauts then returned to Quest and brought the spacewalk to a close at 2:10 p.m. The 6-hour 31-minute excursion was the 210th devoted to station assembly and maintenance since construction began in 1998, the eighth for Feustel and the fourth for Arnold. Feustel's total time in vacuum stands at 54 hours and 59 minutes, moving him up to seventh in the world.

With the spacewalk out of the way, the station crew will turn its attention the launch Sunday of an Orbital ATK Cygnus cargo ship from the Mid-Atlantic Regional Spaceport at NASA's Wallops Island, Va., facility. The cargo ship is expected to arrive at the station on May 24.

The astronauts will help with initial unloading before Soyuz MS-07/53S commander Anton Shkaplerov, Scott Tingle and Norishige Kanai pack up for re-entry and landing June 3 to close out a 168-day mission. Feustel, Arnold and Soyuz MS-08/54S commander Oleg Artemyev will have the station to themselves until three fresh crew members arrive June 8.

After the new crew -- Soyuz MS-09/55S commander Sergey Prokopyev, veteran European Space Agency astronaut Alexander Gerst and NASA flight surgeon Serena Aūnón-Chancellor -- arrives, another spacewalk is planned by Feustel and Arnold on June 14 to install cameras on the front of the station to monitor arrivals and departures of commercial crew ships being built by Boeing and SpaceX.