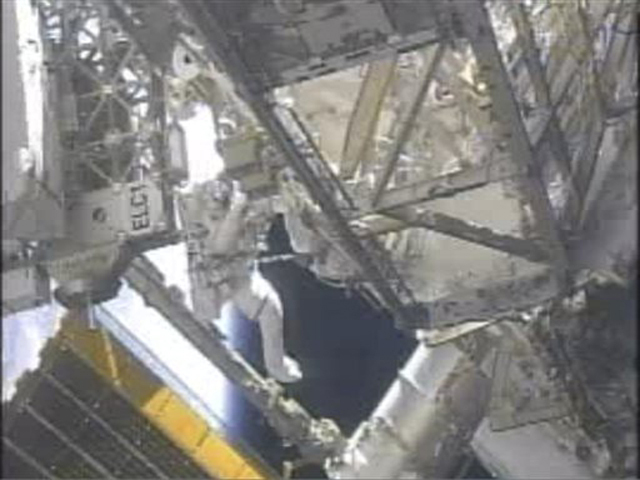 HOUSTON - NASA managers cut short a task on Friday's otherwise routine spacewalk by two Endeavour astronauts because of a spacesuit sensor problem, but most of their work was already finished.

The astronauts were nearly five hours into a planned six-and-a-half hour spacewalk at the International Space Station when mission controllers noticed that Gregory Chamitoff's carbon dioxide sensor on his spacesuit wasn't working. NASA needs to know if levels of carbon dioxide — expelled when you breathe — get too high.

The levels were probably not too high, but the decision was made because of the lack of information. Chamitoff and spacewalking partner Drew Feustel were about to start a 45-minute task to finish installing an antenna on the space station, but controllers figured that would take too much time.

Instead the duo started nearly an hour's worth of cleanup and other tasks, such as retrieving bags. The spacewalk lasted six hours and 19 minutes, just 11 minutes shy of the scheduled time. Astronauts said the spacewalk was a success despite the small shortening.

"Really happy how it worked out today," Chamitoff said.

Three more spacewalks are planned, and the antenna wiring presumably will be added to one of the other excursions, Harwood reports.

Feustel and Chamitoff had already installed a light fixture, swapped out some experiments parked outside the space station and were in the middle of a lengthy task of installing the antenna — getting to the point where they had to remove a shield — when the glitch on the spacesuit was noticed and work was halted.

NASA officials said this spacewalk was supposed to be as routine as they get for what is always a risky task of strolling outside in space. Unlike other spacewalks, when the tasks were so tough their labored breathing could be heard on the radio, Chamitoff and Feustel didn't sound like they were out of breath.

This was the first spacewalk for Chamitoff. He called it "a dream come true for me."

Endeavour's astronauts will make four spacewalks during the 16-day mission, which ends June 1.

This is Endeavour's last flight and the second last of the space shuttle program. NASA is shutting down the program this summer after 30 years, to focus on interplanetary travel. One more mission remains, by shuttle Atlantis, to carry up a load of supplies and equipment.

On Friday, NASA set July 8 as the target date for that launch.

Endeavour's day started with a wake-up song written by two Kennedy Space Center employees, Dan Keenan and Kenny McLaughlin. The song is called "We All Do What We Can Do" and honors workers who prepare the shuttles for launch.

On Thursday, the shuttle's astronauts accomplished their main job: installing on the station a $2 billion physics experiment that looks for antimatter and dark matter. On Saturday, the two crews will get an unprecedented VIP call — Pope Benedict XVI will make the first papal call to space. Two Italians are on board.

Later Friday, mission controllers will further study two damaged tiles on Endeavour's underbelly that slightly worry them. Unless, ground engineers can prove that the two gouges — one of them the size of a deck of cards — are not a safety problem, Endeavour will make an unusual added inspection of the underbelly Saturday. That examination would involve a camera and laser at the end of a boom at the end of the shuttle's robot arm.

Damage on tile was blamed for the disintegration of space shuttle Columbia in 2003. But similar damage to Endeavour in 2007 did not cause problems.