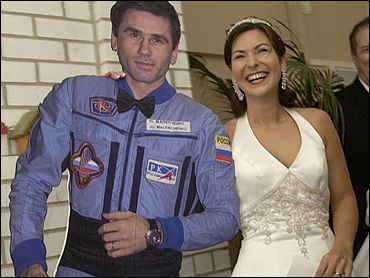 Ekaterina Dmitriev married Russian cosmonaut Yuri Malenchenko in a ceremony that was partly out of this world.

Dmitriev tied the knot with her orbiting sweetie Sunday as he glided 240 miles above the Earth.

The first-ever marriage from space was witnessed by about 200 family members and friends. Texas law allows weddings in which one of the parties is not present.

While Dmitriev said her vows during the ceremony at the Johnson Space Center in Houston, her husband recited them during a live video hookup from the international space station, 240 miles above the Earth.

"It was very sweet," Joanne Woodward, the wedding planner, said about the ceremony, which including a walk down the aisle by Dmitriev and ended with the couple blowing kisses to each other when the judge who conducted it told the groom he could now kiss the bride.

The honeymoon will have to wait until after Malenchenko, who wore a bow tie with his blue space suit, returns to Earth in late October. They plan a Russian Orthodox wedding sometime next year.

Dmitriev, who wore a sleeveless wedding dress with a V-neck, said the two had grown closer during their time apart, making them want to marry as soon as possible.

"As Yuri was further away, he was closer to me because of the communication we have," said the bride, who turned 27 on Friday. "It was a celestial, soulful connection that we have."

At their wedding reception, the bride wore a cream-colored dress while a life-size cardboard cutout of Malenchenko stood in for the groom.

"I'm taking him with me," Dmitriev told reporters, including some from Russia, as she grabbed the cardboard cutout just before she entered the reception. The reception was held at a nearby restaurant, which was decorated with silver stars and mannequins dressed as astronauts.

The happy couple met at a social gathering five years ago and began dating in 2002.

He is a Russian air force colonel who stayed aboard space station Mir for four months in 1994. She left Russia for the United States with her parents when she was 3 and lives in Houston.

After their relationship began, Malenchenko, 41, returned to Russia to train for his upcoming space mission, but the two continued their courtship via telephone. The cosmonaut proposed in December.

Because Malenchenko was preparing for his mission and there was no time to plan a wedding, they decided to get married while he was still in space.

The couple was issued a marriage license on July 17 by the Fort Bend County Clerk's Office.

Malenchenko blasted off to the station in late April with American astronaut Edward Lu, who served as his best man during Sunday's ceremony, and even performed the wedding march on a keyboard in the space station.

The couple's plans to wed weren't without controversy. Officials with the Russian Aerospace Agency tried to convince Malenchenko to delay the wedding until he returned to Earth, saying it would present legal complexities back home. Soviet-era rules require military officers to get permission to marry foreigners.

In the end, Russian officials gave their blessing but said other cosmonauts won't be able to enjoy similar ceremonies and such rules will be included in future preflight contracts.