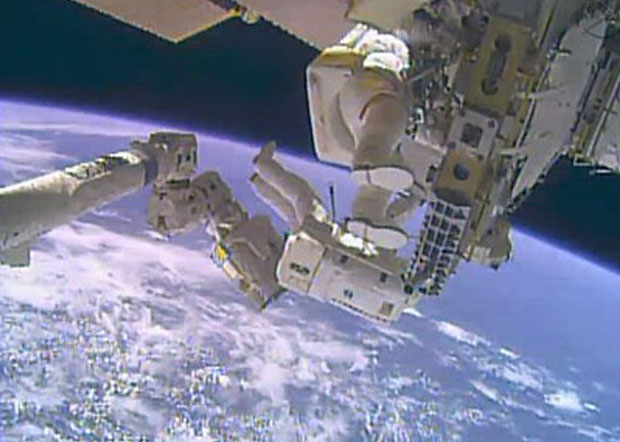 A replacement ammonia pump assembly  installed aboard the International Space Station by two spacewalking astronauts was successfully powered up Tuesday evening in a major step toward restoring a partially disabled coolant loop to normal operation.

"The new pump now is considered fully functional, but it will take some time to fully reintegrate the pump and loop A of the two-loop external cooling system," NASA said in a statement. "Teams at mission control are following a schedule that should allow the restored cooling loop to be fully activated and integrated into the station’s cooling system on Christmas Day."
Coolant loop A, one of two used to dissipate the heat generated by the space station's electronic systems, was partially shut down Dec. 11 when a flow control valve in an ammonia pump module malfunctioned, resulting in lower-than-allowable temperatures. Non-essential systems in the station's forward modules had to be shut down, including many of the lab's major research facilities.

During an earlier spacewalk Saturday, astronauts Rick Mastracchio and Mike Hopkins disconnected and removed the suspect pump module from its rack on the right side of the station's power truss. In a second spacewalk Tuesday, the astronauts successfully installed a spare pump module and reconnected ammonia coolant lines and electrical cables.

Flight controllers performed a brief "aliveness" test before the second spacewalk was over. Then, starting around 4:30 p.m. EST (GMT-5), commands were uplinked to start pressurizing the new pump.

"Reactivation of the pump now is complete, and it is performing its job regulating the flow and temperature of the ammonia in loop A of the two-loop cooling system," NASA said in a statement.

Equipment normally cooled by loop A and powered down in the wake of the pump module valve problem will be reactivated over the next several days, the statement said. Other components that were temporarily switched over to coolant loop B will be returned to loop A in a carefully orchestrated sequence.

The successful repair also clears the way for Expedition 38 commander Oleg Kotov and Russian flight engineer Sergey Ryazanskiy to carry out a spacewalk of their own on Friday. They plan to venture outside to mount cameras on the hull of the Zvezda command module as part of a commercial venture to beam down high-definition views of Earth to subscribers around the world.

Tuesday's spacewalk was the 258th by U.S. astronauts, the 176th devoted to station assembly and maintenance since construction began in 1998, the 10th so far this year, the eighth for Mastracchio and the second for Hopkins.

Mastracchio's total through eight spacewalks now stands at 51 hours and 28 minutes, moving him up to sixth on the list of most experienced spacewalkers. Hopkins total EVA time through two spacewalks stands at 12 hours and 58 minutes.

One hundred and 14 astronauts and cosmonauts have now spent 1,107 hours and 37 minutes of spacewalk time building and maintaining the International Space Station since construction began in 1998.