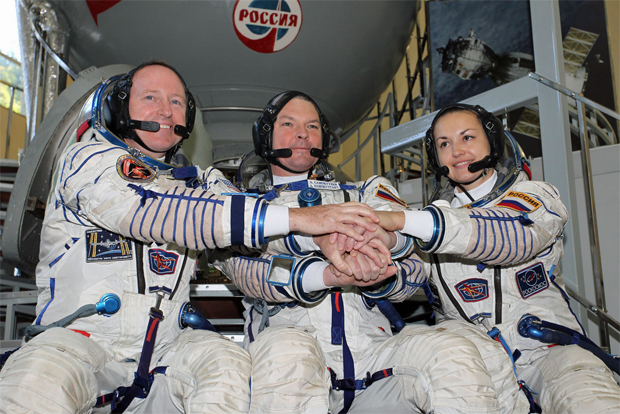 Three space station fliers -- the outgoing NASA commander and two Russian cosmonauts -- are returning to Earth Wednesday after more than five months in orbit, reducing the lab's crew to three in a brief lull before launch of three fresh crew members at the end of the month, including two who plan to spend nearly a full year aboard the outpost.

Soyuz TMA-14M commander Alexander Samokutyaev, flanked on the left by flight engineer Elena Serova and on the right by shuttle veteran Barry "Butch" Wilmore, plan to detach their ferry craft from the space station's upper Poisk module Wednesday, at 6:44 p.m. EDT (GMT-4), to set the stage for re-entry and landing in Kazakhstan.

After moving a safe distance away from the lab complex, Samokutyaev and Serova plan to monitor a four-minute 41-second deorbit rocket firing, starting at 9:16 p.m., slowing the ship by about 286 mph to drop the far side of its orbit deep into Earth's atmosphere.

If all goes well, the capsule will settle to a jarring parachute and rocket-assisted touchdown near the town of Dzhezkazgan around 10:07:53 p.m. to close out a 167-day five-hour voyage that began with blastoff last Sept. 25 from the Baikonur Cosmodrome.

Forecasters are predicting temperatures in the mid 20s with fresh snow in the wake of a passing frontal system.

"It's not many jobs that you have the opportunity to return from work in a 17,000-mile-an-hour fireball," Wilmore, a fighter pilot with a shuttle mission to his credit, joked from orbit. "This is one of those opportunities! To be honest, I'm not a thrill seeker by any means, but a unique experience like that, I do look forward to it, literally coming back in a fireball."

He said said he was particularly looking forward to landing when "the Soyuz capsule does a lot of rocking and rolling."

"Eventually, the main chutes come out and, of course, you've got the separation of the (heat shield) on the bottom of the capsule and so many different events," he said. "And finally, the soft landing jets fire -- they're not so soft, I'm told -- and then, of course, the touchdown.

"It's going to be wintertime in Kazakhstan, a lot of snow, so maybe we'll hit a nice fluffy snow bank. And as the hatch opens, that fresh air coming in, it'll be chilly, I look forward to that as well."

As always with Soyuz landings, Russian recovery forces and a team of U.S. and Russian flight surgeons will be standing by near the landing zone to help the returning station fliers out of their cramped descent module for initial medical checks and satellite calls home to friends and family.

At touchdown, Samokutyaev will have logged a combined 331 days in space during two space flights, Wilmore's total, including one shuttle flight, will stand at 178 days while Serova, completing her first mission, will have logged 167 days aloft.

All three will fly by helicopter to Karaganda before splitting up for separate trips home. Wilmore will board a NASA jet and fly back to Houston while Samokutyaev and Serova head for home in Star City near Moscow for debriefing.

"I can't say enough about our crew on board," Wilmore said during a change-of-command ceremony. "What a blessing to have this group of people assembled together. The joy, the fun that we've had together, the work that we've done together has just truly been amazing."

"You have been a perfect example for us, you're exactly what a space station commander should be, and it's been a real blessing to have you," he said.

Virts and his crewmates will have the lab to themselves until March 27 when another Soyuz, TMA-16M, carries veteran cosmonaut Gennady Padalka, Scott Kelly and Mikhail Kornienko to the lab complex.

Padalka, who has logged 711 days in space during four previous flights, plans to return to Earth in September, becoming the world's most experienced spaceman in the process and pushing his total time to 877 days. Kelly and Kornienko plan to spend nearly a full year aboard the laboratory, serving as test subjects for a variety of medical experiments to learn more about the long-term effects of the space environment, from prolonged weightlessness to higher levels of radiation.

While four cosmonauts flew for a year or longer during the Mir era, Kelly and Kornienko will set a new duration record for the International Space Station while Kelly will set the endurance mark for U.S. astronauts.

"My wife, my family would say go, but I've got a seven year old and a ten year old, and I've got to think about them as well," he said. "So, yeah, part of me says I'll go, but there'd be a lot of discussion and a lot of decisions made within my household before I could actually sign up for something like that."

He was busy enough during his five-and-a-half months aloft.

Wilmore's crew helped kick off a busy year aboard the station as NASA carries out a major reconfiguration of the lab complex, installing new docking mechanisms, wiring and antennas needed by commercial crew capsules being built by Boeing and SpaceX. Seven U.S. spacewalks are planned, including three carried out earlier this month by Wilmore and Virts.

The crew also accepted delivery of two Russian Progress cargo ships, a SpaceX Dragon supply capsule and carried out dozens of experiments. And along the way, Wilmore, a diehard SEC football fan, enjoyed watching the Tennessee Volunteers in games beamed up from mission control.

But Wilmore's top priority was the science.

"Much of what we have done, preparing the station for the future, that's a lot about what Expeditions 41 and 42 have been about," he said. "We've done some cutting-edge science, initial rodent research and dealing with zebra fish and various other animals up here, also capillary flow experiments, combustion science, vegetation growth.

"And it's all looking to the future, to prepare ourselves to go farther, beyond low-Earth orbit into the far reaches, perhaps one day, of the solar system."

While he looked forward to experiencing landing aboard a Soyuz spacecraft, Wilmore said he was particularly eager to see his family and friends.

"That's one of the great things that NASA affords us with IP phone, email and other things that are pretty much real time up here, and it's to share the experience with those we care about and those we love," he said. "And that's been very special. To be able to do that face to face, I'm really looking forward to that."

Hitting the beach? How to safeguard your electronics

More than 12M "Me Too" Facebook posts, comments, reactions in 24 hours
William Harwood