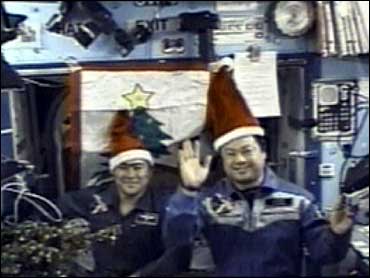 A Russian cosmonaut and U.S. astronaut got some belated Christmas turkey along with vital supplies Sunday when an unmanned cargo ship docked at the international space station, ending shortages that had forced the crew to ration dwindling supplies.

The Progress M-51 faultlessly docked at the orbiting station at 6:58 p.m. EST Saturday, 2:35 a.m. Moscow time. Workers at Russian Mission Control in Korolyov, just outside Moscow, broke into applause when the hookup, seen on large television screens, was completed.

The spaceship, which lifted off Friday from the remote Baikonur cosmodrome in the steppes of Kazakhstan, delivered about 2.5 tons of equipment and supplies, including more than 440 pounds of food for Russian cosmonaut Salizhan Sharipov and U.S. astronaut Leroy Chiao, who are in their third month on the station.

"They can greet the New Year calmly," said Yuri Semyonov, the chief of the Energiya company, which built the Progress.

The cargo included Christmas and New Year's gifts for the crew from their families and friends and some turkey for a belated Christmas dinner, space officials said.

Russian and American space officials were alarmed earlier this month to learn that supplies at the station were running out, and ordered the crew to cut back on meals. Russian Mission Control officials, who spoke on condition of anonymity, said the crew had run out of meat and fish but still had other food, like cereals and biscuits.

NASA said there was enough food to last seven to 14 days beyond Dec. 25, but warned that the crew would have been forced to return to Earth if Progress didn't successfully dock at the station.

Expedition 10 commander Leroy Chiao and Sharipov would have been forced to shut the station down and return to Earth by the end of the first week in January at the latest, reports CBS News Space Consultant Bill Harwood. That would have ended more than four years of continuous occupation since the first crew moved aboard in November 2000.

Semyonov blamed previous crews for being too choosy about food, leaving Sharipov and Chiao with staples, but didn't accuse anyone in particular.

"The crew have picked the food which they liked more," Semyonov told reporters after the docking. "If you get your hands on someone else's stuff, you should at least tell people about that. There was a lack of coordination between officials on the ground and cosmonauts."

In an interview earlier this week, Chiao blamed the food shortage on an inventory management problem and the hearty appetites of the previous crew, Expedition 9 commander Gennady Padalka and flight engineer Michael Fincke.

"The last crew kind of got into our food and the biggest problem with that was that somehow they failed to communicate accurately to the ground what exactly had happened, particularly on the Russian side," Chiao told an interviewer earlier this week.

"So consequently, we did not bring enough food with us (in October) on our Soyuz to make up for what they had taken. Unfortunately, we didn't know that right away, it took a month and a half or so of living on the station before we realized our stocks were getting a little low."

An international team was looking into how the station's food inventory ended up being tracked so poorly.

The new supplies included 70 food containers, reports Harwood, 41 of which include American choices and 29 of which feature Russian menu items. That's enough food for 67 days of operations at one full ration per day per crew member and another 45 days at a consumption rate of 0.8 rations per crew member per day.

That's nearly twice as much food as the crew would need before the next Progress arrives in early March.

Russian Soyuz crew capsules and Progress cargo ships have been the sole link to the space station since the U.S. shuttle fleet was grounded after the shuttle Columbia burned up on re-entry in February 2003, killing all seven astronauts aboard.

NASA has said it plans to resume its shuttle program in May.

The next Progress launch is set for Feb. 28.