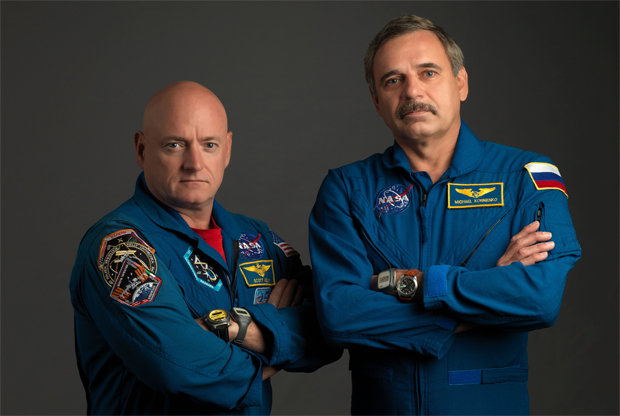 NASA astronaut Scott Kelly and Russian cosmonaut Mikhail Kornienko are gearing up for launch March 27 to kick off a record one-year stay aboard the International Space Station, an orbital marathon both men say is crucial for planning future flights beyond Earth orbit and, eventually, to Mars.

While four cosmonauts logged flights longer than one year between 1987 and 1999, the upcoming flight will be a first for the international lab complex and the first to focus on the long-term biological effects of the space environment using state-of-the-art medical and scientific research equipment and procedures.

"If we're ever going to go beyond low-Earth orbit for longer periods of time, spaceflight presents a lot of challenges to the human body with regard to bone loss, muscle loss, vision issues that we've recently realized people are having, the effect on your immune system, the effect of radiation on our bodies," Kelly said Thursday during a news conference in Paris. "Understanding those effects are very important.

"If a mission to Mars is going to take a three-year round trip, we need to know better how our body and our physiology performs over durations longer than what we've previously on the space station investigated, which is six months. Perhaps there's a cliff out there with regards to some of these issues that we experience and perhaps there aren't. But we won't know unless we investigate it."

A veteran of three previous space flights, including a shuttle mission to the Hubble Space Telescope and a 159-day stay aboard the station in 2010-11, Kelly is the twin brother of Mark Kelly, a retired astronaut who flew four shuttle missions and who is married to former congresswoman Gabrielle Giffords.

Kornienko also is a station veteran, logging 176 days aboard the outpost in 2010.

"The last long-time space mission was on the Mir (space) station and it brought major data for investigations and research about how humans will feel during long-term flights into space," he said. "I hope that our mission will be an opportunity for others who will follow in our footsteps and take space exploration further."

Kornienko said his wife cried before his last launch and cried again when he was named to the one-year crew. Asked how his daughter took the news, he smiled and said "she's 32, and you can congratulate me, I've become a grandpa!"

During their year aboard the station, major changes are planned including the installation of new docking adapters on two U.S. ports to accommodate commercial crew ferry craft being built by Boeing and SpaceX, work that will require the robotic relocation of a storage module. At least a half-dozen U.S. spacewalks are planned, including at least three by Kelly, and an unrelated Russian excursion that will include Kornienko.

The work will begin in late January and early February when two current crew members, Expedition 42 commander Barry "Butch" Wilmore and Terry Virts, carry out three spacewalks to pre-install wiring needed by the docking adaptors and new communications equipment that will be used by Boeing and SpaceX crews approaching and departing the space station.

But the primary focus is on research, serving as both operator and subject in a variety of experiments. In a Time Magazine cover story this week, Mark and Scott discussed the value of research comparing changes experienced by one twin in orbit with the baseline provided by the other twin on Earth.

"This one-year flight is one of many stepping stones towards leaving low-Earth orbit again," Kelly said at the news conference. "It's a focused effort to reach across international and technological boundaries to enhance our integrated science on board the space station."

While station fliers routinely operate a battery of experiments, for Kelly's flight "NASA has selected 19 collaborative investigations to evaluate the effects of longer duration spaceflight on humans," he said. "Roscosmos and the Russian space agency selected 14 investigations. And some of those are joint investigations that Misha (Kornienko) and I will be participating in together."

"As far as the U.S. science is concerned, our 19 investigations are broken down into seven different categories, from functional to behavioral health, visual impairment, metabolic, physical performance, microbial and human factors investigations. ... My excitement is for the science and what we're going to learn on this nearly one-year flight."

But it won't be easy. Even thought the space station is relatively roomy with a habitable volume roughly equivalent to a 747 jumbo jet, staying cooped up for a year will be a challenge. While Kelly said he's not particularly worried about any psychological effects, he said the idea of spending a year in space was not initially appealing.

"At first, I'll be honest with you, I wasn't that interested because six months is a long time in space, and a year is obviously twice as long," he said. "But after thinking about it for a while, I did want to fly in space again."

In the end, he decided that spending a year aloft would not be all that different from a typical six-month station stay, adding "I'm the type of person who likes challenges."

The lab's current crew is made up of Wilmore, Alexander Samokutyaev and Elena Serova, launched Sept. 25 aboard the Soyuz TA-14M spacecraft, along with Virts, Anton Shkaplerov and European Space Agency astronaut Samantha Cristoforetti, launched Nov. 23 aboard the TMA-15M ferry ship.

Wilmore, Samokutyaev and Serova are scheduled to return to Earth March 11, leaving the station in the hands of Virts, Cristoforetti and Shkaplerov. On March 27, Kelly, Kornienko and Soyuz TMA-16M commander Gennady Padalka will blast off from the Baikonur Cosmodrome in Kazakhstan, docking with the station's upper Poisk module that same day.

Virts, Cristoforetti and Shkaplerov will return to Earth May 10. That will clear the way for the launch of Soyuz TMA-17M on May 26 carrying spacecraft commander Oleg Kononenko, Japan's Kimiya Yui and NASA's Kjell Lindgren, who will dock at the forward Rassvet module.

Because Soyuz spacecraft are only certified for six months in orbit, the ferry craft that carries Kelly, Kornienko and Padalka to the outpost must be replaced midway through the year-long mission. A fresh Soyuz, TMA-18M, will take off Sept. 1 carrying spacecraft commander Sergei Volkov, ESA astronaut Andreas Mogensen and singer Sarah Brightman, the first paying "space tourist" to visit the station since 2009. The arrival of Volkov and company will temporarily boost the lab's crew to nine.

Kononenko, Lindgren and Yui are scheduled to depart the station on Nov. 5, leaving the lab in the hands of Kelly, Kornienko and Volkov. Then, on Nov. 20, three fresh crew members -- Yuri Malenchenko, NASA astronaut Tim Kopra and ESA's Timothy Peake-- will take off aboard the Soyuz TMA-19M ferry ship to boost the station's crew back to six.

Finally, on March 3, 2016, Kelly, Kornienko and Volkov will return to Earth, closing out the year-long mission. Assuming the launch and landing dates hold up, mission duration will be 341 days.

"For me personally, this flight is not any different from any of my three previous flights," Kelly said. "My goals have always been no one gets hurt, we don't break anything and we leave as friends. That was the case, I felt, on my first flight, which was only eight days. Seemed like that was a long time. ... Then my next flight was 13 days, then 159, and they're getting longer. I think if I fly again it just goes asymptotic and I never come home!"

The Paris news conference touched on a wide variety of issues, including increased tensions between the United States and Russia in the wake of Russian actions in Crimea and Ukraine and subsequent U.S. sanctions. But Kelly and Kornienko insisted that political discord on Earth had no bearing on space station operations.

"We rely on each other implicitly for our lives," Kelly said. "Any political issues that exist between our countries is something we don't even discuss. We're great friends, we're colleagues, we're professionals, and that's the way it has to be."

Said Kornienko: "I absolutely agree with Scott. There are no borders in space between us. It's a great example of how we can work together."