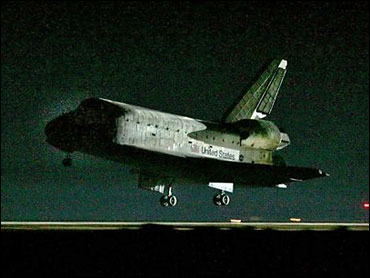 With Discovery safely back on the ground, the astronauts who repaired it in outer space and guided it around the Earth 219 times headed to Houston for a triumphant reunion Wednesday with their families.

The space shuttle itself remains in California, reports CBS News Correspondent Steve Futterman, and is likely to stay there another week before it rides piggyback atop a modified Boeing 747 back to Cape Canaveral. The cross-country trip is expected to cost the space agency about $1 million.

But as the celebrations continued for what mission controllers called a "truly spectacular test flight," it was still uncertain if and when another space shuttle would return to orbit.

The tense, two-week mission, which ended Tuesday morning when Discovery safely landed in California, exposed how vulnerable the shuttle fleet remains, despite a tremendous amount of money and effort invested in the first U.S. manned space mission in the 2½ years since the Columbia tragedy.

Shortly after Discovery lifted off July 26, a 1-pound chunk of foam insulation fell from the fuel tank — the very thing that doomed Columbia. The foam missed Discovery, but NASA grounded all shuttle flights until engineers fix the problem.

"We're going to try as hard as we can to get back in space this year," NASA Administrator Michael Griffin said at a post-landing news conference. "But we're not going to go until we're ready to go."

"We will not fly the next flight until we're ready and we feel the risk is low enough to fly another flight," agreed Discovery astronaut Steve Robinson.

Another question facing NASA is whether the aging shuttle fleet is still able to do its job.

"The shuttle certainly is old. It is built on 1970s-era technology, but it is hand-maintained," said CBS News Space Consultant Bill Harwood. "It's like an old race car that's been lovingly maintained.

"It's still the only game in town that can carry heavy cargo and people into orbit."

"Eventually the shuttle will make its last flight, and I'll be sad, because I believe the space shuttle program has been very successful," said Collins.

Shuttle managers freely acknowledged the foam mistake, while stressing that the inspection, photography and other shuttle data-gathering systems put in place for this flight worked well.

"I hope this shows people that we're coming back," NASA spaceflight chief Bill Readdy said from Cape Canaveral, Fla. "We've got some more work to do. We know what we need to do and we'll do it."

"They have a launch target of Sept. 22, but I don't see any way they can make that, even though they're driving pretty hard to make that date an option," said Harwood on CBS News' The Early Show Wednesday. "Until they get to the bottom of the foam problem, this is going nowhere."

The Columbia disaster weighed heavily on everyone's minds as the shuttle made its descent to Earth. The 17,000-mph plunge from orbit took Discovery through a passage of the same kind of intense heating that exposed the mortal wound in Columbia's wing and caused the shuttle to disintegrate, killing all seven astronauts aboard.

The shuttle soared across the Pacific and over Southern California, passing just north of Los Angeles on its way to Edwards as it completed a 5.8 million-mile journey. During Discovery's approach, Dr. Jon Clark, a NASA neurologist and husband of Columbia astronaut Laurel Clark, said he quietly remembered his wife and closely compared the two missions.

"I thought, 'This is when the tire light went on,'" Clark said from Kennedy Space Center, referring to an initial sensor reading that Columbia was breaking up. "I was paralleling the two missions."

After Discovery landed, shuttle Commander Eileen Collins said the U.S. should continue launching shuttles until the scheduled completion of the international space station in 2010 — a sentiment echoed by NASA Administrator Michael Griffin.

"Some people say we should stop flying the shuttle because we had an accident — frankly we've had two accidents — but we are people who believe in this mission and we are going to continue it," Collins said.

"It was a great achievement," Mr. Bush said. "It was an important step for NASA as it regains the confidence of the American people and begins to transition to the new mission we've set out for NASA."

NASA officials had scrapped four landing attempts in Florida because of the weather. Of the 111 shuttles that have landed since 1981, 49 came in at Edwards. The last shuttle to land at Edwards was Endeavor in 2002.

Astronauts performed two planned spacewalks to test new repair techniques and replace a failed 660-pound, washing machine-sized gyroscope which helped control the station's orientation. It is the first time in three years that all the station's gyroscopes were working simultaneously.

In a third unprecedented spacewalk, astronaut Robinson went beneath Discovery's belly to pull out two protruding thermal tile fillers that engineers on the ground feared could cause overheating during re-entry and lead to another Columbia-type disaster. NASA canceled a fourth spacewalk to repair a torn thermal blanket near the cockpit window, saying that it posed little danger to the shuttle.

In Rochester, N.Y., Collins' 79-year-old father, James, a retired postal worker, described it as "the day of my life."

"We're always the parents of Eileen," he said. "Eileen right now to me belongs to all of us. Right at this point, I can say she belongs to the world."