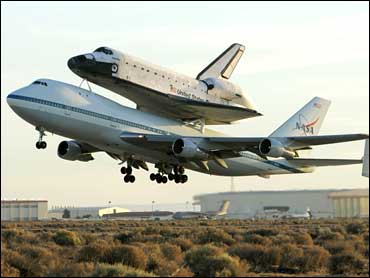 A jumbo jet carrying the space shuttle Atlantis took off Sunday on a return trip to the shuttle's launch site at Kennedy Space Center in Florida.

A modified Boeing 747 with the shuttle mounted on its back left from the Mojave Desert air base at 6:05 a.m. PDT, said Alan Brown, a spokesman at NASA's Dryden Flight Research Center at Edwards Air Force Base.

The jet, which stops to refuel at undisclosed locations, was not expected to arrive at Cape Canaveral until at least Monday, with the possibility of a Tuesday arrival if weather is bad, NASA spokesman Bill Johnson said.

Unfavorable weather at its Florida launch site forced it to divert to its alternate landing site in California.

NASA prefers to land shuttles in Florida to avoid the cost of transporting them back on a cross-country flight.