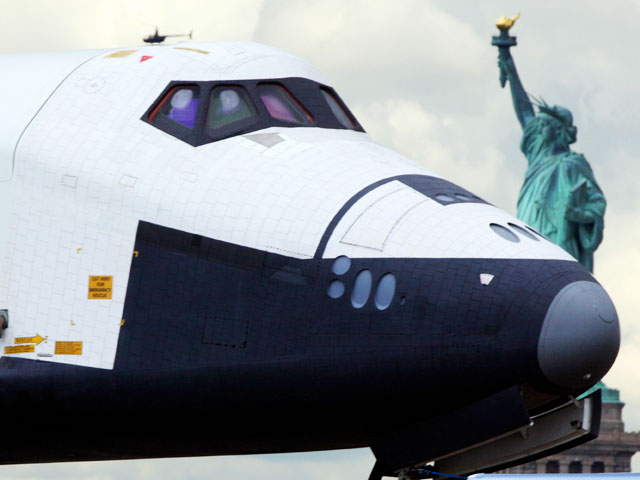 The prototype space shuttle left Jersey City on a barge Wednesday at around 10 a.m. and began traveling up the Hudson River.

It passed the Statue of Liberty and the World Trade Center site, and reached the Intrepid, where it was hoisted by crane onto the retired aircraft carrier's flight deck.

The shuttle left John F. Kennedy International Airport on a barge Sunday morning. It was towed past thousands of spectators to Jersey City.

The much-anticipated final trip is a culmination of a journey that began at Washington Dulles International Airport in April. The shuttle was hitched onto the back of a 747 and flown to New York City, where it passed over city landmarks for nearly an hour before landing at Kennedy.

Last weekend, a gust of wind caused the Enterprise's wingtip to hit wood bumpers, but it only suffered minor damage, CBS New York reports. The wingtip was quickly patched back up, making the Enterprise ready for its museum debut.

"It's about time something from space came to the New York area," Michael Laterza of Scarsdale, N.Y., told CBS New York.

While the Enterprise never launched into orbit, it was used as a test spacecraft and now it will be used to educate the public about the glory of space.