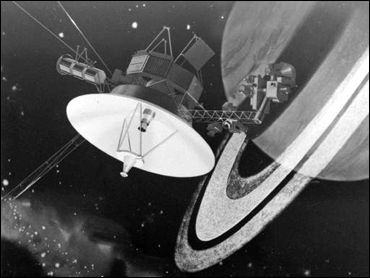 The Voyager 1 spacecraft, the most distant human-made object, has reached the end — or perhaps just the beginning of the end — of our solar system, scientists argue in two new studies.

As of Wednesday, 26 years after its launch, NASA's Voyager 1 was 8.4 billion miles from the sun. That's 90 times the distance separating the Earth from our star.

As the robotic spacecraft continues to push far beyond the reach of the nine planets, two teams of scientists disagree whether it passed into the uncharted region of space where the sun's sphere of influence begins to wane.

The sun sends out a stream of highly charged particles, called the solar wind, that carves out a vast bubble around the solar system.

Beyond the bubble's ever-shifting boundary, called the termination shock, lies a region where particles cast off by dying stars begin to hold sway.

That region, called the heliopause, marks the beginning of interstellar space and the end of our solar system. Whether Voyager 1 reached that mark or is still on approach remains unclear, with scientists providing evidence for both claims. Details appear Thursday in the journal Nature.

"Neither explanation is certain," writes Len Fisk, of the University of Michigan, in an editorial accompanying the two studies.

Scientists have long theorized that a shock wave exists where the hot solar wind bumps up against the thin gas of the interstellar medium. A similar shock wave precedes aircraft flying faster than the speed of sound, causing a sonic boom.

In space, the violent encounter slows the solar wind from supersonic velocity to subsonic speed, and causes a pileup of particles.

As they accumulate, the particles increase in temperature. Also, as they skip back and forth across the shock boundary, they are accelerated and energized.

Scientists have pored over data from Voyager 1 for evidence of any of those activities, which would suggest the one-ton spacecraft has reached the termination shock. (The one instrument that could measure the solar wind velocity and give somewhat of a definitive answer ceased working years ago.)

"The inference that the solar wind's velocity basically went to zero seemed to us to be rather compelling argument we were in the vicinity of the termination shock and the boundary of the solar system," said Louis Lanzerotti, of Bell Laboratories and the New Jersey Institute of Technology, and a co-author of the first study.

A second team, analyzing higher energy particles, suggested the higher density of particles encountered by Voyager 1 represents merely a precursor of things to come and that the termination shock still lies beyond.

"We say what we are seeing is exactly what we would expect to see as we approach the shock," said Frank McDonald, of the University of Maryland, and a co-author on the second study. "We are not there yet."

Further observations from Voyager 1 — as well as Voyager 2, which trails its faster twin — should resolve the dispute, as well as provide information about a never-before-probed region of space. The nuclear-fueled probes should last to 2020.

"We are beginning the exploration of a new frontier," said Voyager project scientist Edward Stone, of NASA's Jet Propulsion Laboratory.