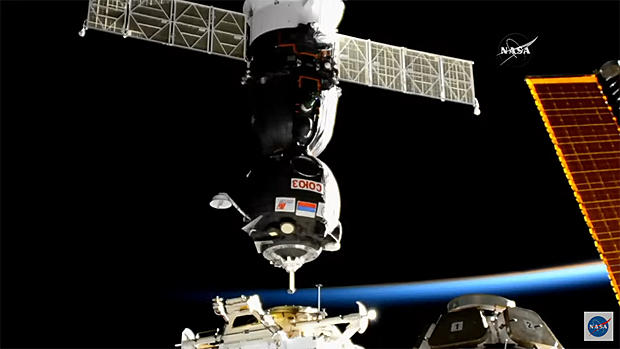 After a picture-perfect launch from Kazakhstan and a problem-free rendezvous, a Russian Soyuz spacecraft docked at the International Space Station Friday, boosting the lab's crew back to six and, for the first time, giving NASA and the European Space Agency four astronauts devoted to research in the U.S. segment of the complex.

With commander Sergey Ryazanskiy monitoring an automated approach, flanked on his left by NASA flight engineer Randy Bresnik and on the right by Italian astronaut Paolo Nespoli, the Soyuz MS-05 spacecraft docked at the Earth-facing Rassvet module at 5:54 p.m. ET.

The linkup came about six hours after the crew blasted off from the Baikonur Cosmodrome in Kazakhstan, at 11:41:12 a.m., departing from the same pad that was used to launch Sputnik 60 years ago and Yuri Gagarin, the first man in space, in 1961.

Nearly two hours after docking, after verifying an airtight seal between the space station and the Soyuz, hatches were opened and Expedition 52 commander Fyodor Yurchikhin, flight engineer Jack Fischer and Peggy Whitson, NASA's most experienced astronaut, welcomed their new crewmates aboard with hugs and handshakes.

The six-member crew then floated into the Russian Zvezda module for a traditional post-docking video call to family and friends back at the launch site. NASA's acting administrator, Robert Lightfoot, congratulated the crew on a spectacular launch and then passed the phone to the crew's families.

"It was bright and loud. And interesting."

"Well, maybe someday you'll get a chance to ride on one," Bresnik replied.

"That would be nice," Wyatt said. "I just want to tell you I love you, and we'll miss you."

After speaking with daughter Abigail, who managed a shy "hi, poppa," and his father, Albert, Bresnik thanked his wife Rebecca for "the amazing love and support you've given me the last two years to get to this point. I hope we can make you proud while I'm up here."

He then took a moment to thank the Russian engineers who assembled the Soyuz rocket and spacecraft, saying "that was the most amazing, smooth rocket ride I've ever had. I would really like to say thanks on behalf of the three of us to our Russian colleagues and our Russian partners who made such a beautiful vehicle."

Bresnik, an F/A-18 TOPGUN pilot with more than 6,000 hours flying time in high-performance aircraft, spent 10 days in space as a shuttle crew member during a 2009 space station assembly mission.

Ryazanskiy, with a doctorate in biomedicine, is the first scientist-cosmonaut to serve as a Soyuz commander. He spent 166 days aboard the station in 2013-14 and commanded one of three international crews during a 500-day simulated Mars mission in 2009. Nespoli, making his third spaceflight, has logged 174 days in orbit.

They now join Yurchikhin, Fischer and Whitson, who have had the station to themselves since June 2 when Soyuz MS-03 commander Oleg Novitskiy and European Space Agency astronaut Thomas Pesquet returned to Earth. With the arrival of the Soyuz MS-05 crew, an additional USOS crew member will be available to carry out research.

The expanded Expedition 52 crew will include four astronauts assigned to the U.S. segment of the station -- Fischer, Whitson, Bresnik and Nespoli -- and two in the Russian segment -- Yurchikhin and Ryazanskiy.

The station crew normally is evenly split between the Russians and the U.S. segment, which includes astronauts representing NASA, ESA, Japan and Canada. But the Russian space agency Roscosmos recently decided to reduce its crew complement to save money and that opened up additional Soyuz seats for U.S. orbital segment (USOS) astronauts.

With the arrival of the Soyuz MS-05 crew, an additional USOS crew member will be available to carry out research.

"The big thing is we're going to have four USOS crew members, and with over 330 possible experiments, of which 85 are new to the space station, there's a ton of science for us to do," Bresnik said in a pre-launch news conference.

Ryazanskiy, who will join Yurchikhin for a spacewalk Aug. 17, said having only two Russian crew members aboard will require some Russian research to be carried out in their spare time, but he does not anticipate any problems.

"We will be really busy because there will only be two of us," he said. "I have a lot of science that is now going on the task list so some experiments will be done in my free time aboard the station. But overall, for life support and technical issues, two Russian crew members will be enough."

Yurchikhin, Fischer and Whitson are scheduled to return to Earth Sept. 3. They will be replaced Sept. 13 by Soyuz MS-06 commander Alexander Misurkin, NASA flight engineer Mark Vande Hei and astronaut Joe Acaba. It will be the second expedition with four USOS crew members.

Ryazanskiy, Bresnik and Nespoli will return to Earth on Dec. 14. Between now and then, the overlapping station crews will carry out multiple spacewalks, help with the departure of one Soyuz and the arrival of another and unload four cargo ships -- one Russian Progress, two SpaceX Dragons and one Orbital ATK Cygnus.

And throughout it all, the station crew will carry out a full slate of scientific research.

"I am excited about having a full complement of people up here who can really utilize this amazing laboratory," Fischer said in a recent interview with CBS News.

"This will be the first time where we have four USOS, we're have three Americans and an Italian, Paolo, working on the U.S. segment on science. Four people. That's crazy talk!" Fischer added. "I'm super excited about how much science we're going to be able to get done with all four people. So, overall, it's awesome, I cannot wait ... for the discoveries that we make together."