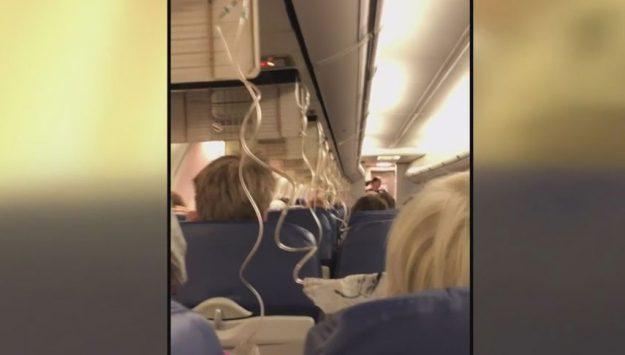 DALLAS -- A Southwest Airlines plane was forced to make an emergency landing Saturday in Dallas. CBS/Dallas Fort Worth reports the plane is now undergoing a maintenance review. Flight 861 was headed from Denver to Dallas Saturday night, and there were more than 100 passengers on board.

Passenger Glen Eichelberger said at around 9 p.m., the oxygen masks came down and passengers were told to put them on because the cabin was losing pressure.

However on Monday, Southwest issued a statement to CBS News saying the cabin did not lose pressure.

"The pressurization event was related to an aircraft duct that resulted in the oxygen masks deploying; the cabin did not depressurize," the statement said.

Passenger Josh Trimberger said the plane was about 30 minutes outside of Dallas at that point.

"Luckily, we were in the DFW area where we have Alliance, Love Field and DFW," said Trimberger.

"I had no idea what was going on or what the outcome was going to be," said Eichelberger. "I reached over and grabbed Josh by the arm because I didn't know if we were going to make it or not. There was no communication whatsoever from the flight attendants or from the cockpit as far whether we were in mortal danger."

The two wish there was better communication on board, but said, luckily, it didn't take long for the pilot to get the plane safely on the ground.

A spokesperson for Southwest Airlines said there were no major injuries, but paramedics did have to treat some passengers for ear pain. In an email response, the spokesperson called the landing uneventful, but passengers on board said that's not the case.

"When you're in the air 20,000 feet above the ground and don't know what's going on, it's not uneventful," said Eichelberger.

Eichelberger and Trimberger said they recognize accidents happen and will still be flying Southwest, but hope passenger safety is being taken seriously.

"They do thousands of flights a day and it's a rare instance that this happened and I think it could have happened to anybody," said Trimberger.

Saturday's emergency landing is just the latest safety scare for Southwest Airlines. Last month, a mother was killed after a jet engine exploded during a flight. A few weeks later, a cracked window prompted another emergency landing.