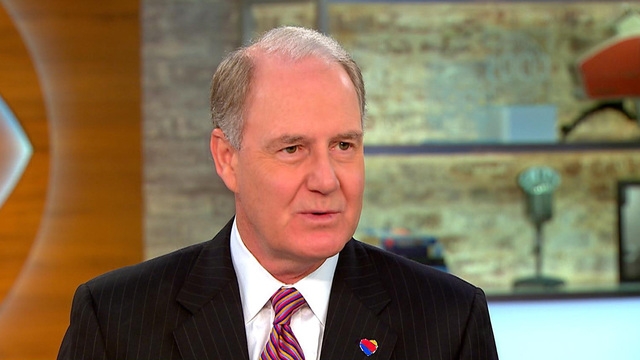 A critical shortage of air traffic controllers could cause flight delays for travelers, according to congressional testimony Wednesday. Indeed, the number of controllers, already at a 27-year-low, has continued to decline in the first three months of this year.

"It's the greatest system money can buy -- during World World II -- so it is vastly outdated," Kelly said. "No one disagrees with that. I think where there is disagreement is how to move forward."

The Federal Aviation Administration told CBS News that it is "making very significant progress modernizing the world's busiest and most complex aviation system despite budget cuts and funding uncertainty."

But Kelly disagreed, proposing that the only way to make any progress is to reform the FAA by making it a non-profit corporation with a board of directors.

"Our country's been working for decades to try to modernize the system; it's not going to happen at the current pace," Kelly said. "Our colleagues in the FAA are clearly to be applauded for the efforts that they put forth -- they're clearly making some progress -- but we have a very, very long way to go, and as they admit in that statement, it's against very significant obstacles and odds towards making progress, so we need to take down those barriers. It is a multi-billion dollar effort confronting us and we need it now -- not 25 years from now, if then."

This year marks the 45th anniversary of Southwest, the nation's largest domestic airline. In May, the airline boasted a record "passenger load" that exceeds 85 percent per plane. Its low-fare competitor JetBlue recently introduced an upgraded class program called "Mint" to boost revenues. But Southwest has stood firmly by its all-coach model.

"That's not part of what we do -- we focus on maintaining care for every single customer," Kelly explained. "We have an all-coach cabin, there are no second class customers on Southwest Airlines. Everybody is important and we also focus on short to medium haul flights. We don't have any ultra-long haul flights. It works very well for us and we're the largest airline in America."

Southwest also does not charge customers for up to two checked bags, for changing tickets or for satellite T.V.-- common practices at many other airlines. While this has drawn criticism from Wall Street investors who say Southwest is leaving millions of dollars on the table, Kelly believes it has the contrary effect.

"I think that we've earned a lot of fans and a lot of loyalty over a long period of time because we treat people right," Kelly said. "I think that earns us more customers, and in fact, I think if we started charging the extra fees, we'd lose more customers than we'd gain in fees. So I think it's good business."

Southwest is joining five other U.S. carriers to begin flying to Cuba. The six airlines were approved by the Department of Transportation to operate routes from five U.S. cities to nine Cuban cities, excluding Havana.

"We're ready to go," Kelly said. "Havana is key and hopefully we'll hear something in July and we can get the flights [to Cuba's capital] launched this year."