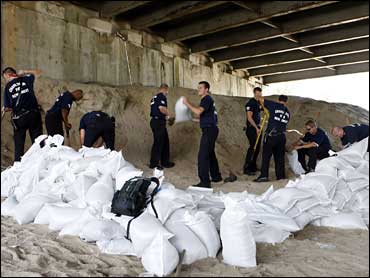 Tropical Storm Hanna roared past the edge of the Bahamas on Thursday ahead of a possible hurricane hit on the Carolinas, leaving behind at least 137 dead in Haiti.

Hurricane Ike, a still-more-dangerous Category 4 storm, was advancing from the east.

Hanna blew by the Bahamas late Thursday, knocking out power to Cat Island and causing minor flooding in other eastern islands, but sparing the Atlantic nation major damage.

U.S. National Hurricane Center said Hanna should reach the coast of North or South Carolina by Saturday, but its sprawling bands of outer winds are likely to hit the U.S. sooner.

Haiti's government more than doubled Hanna's death toll late Thursday to 137. It had previously been 61.

Eighty of the deaths occurred in the flooded region of Gonaives and another 22 people died in areas immediately surrounding the port, according to statements released by the Ministry of the Interior and the Civil Protection Department. The remaining 35 deaths were scattered across Haiti, the statements said.

Gonaives has been almost entirely cut off by Hanna's floodwaters and virtual lakes have formed over every road.

The storm also was blamed for two deaths in Puerto Rico.

Hanna's heart was about 540 miles south of Wilmington, North Carolina, late Thursday night. It was moving toward the northwest near 14 mph.

Its maximum sustained winds were 65 mph, but forecasters said it could become a hurricane before hitting the U.S.

Forecasters expected Hanna to strengthen only slightly before making landfall early Saturday, though hurricane watches remained for much of coastal North and South Carolina.

The governors of Virginia and North Carolina declared states of emergency and officials urged residents to head inland Thursday as Hanna approached. Some residents shuttered houses and stocked up on food and sandbags.

"You just don't know with these hurricanes, you don't know what path they're gonna take," said Larry Kowalsky.

Folks are already boarding up windows and the military is moving aircraft to safety, reports David.

In the Bahamas, Hanna snapped telephone lines in the eastern island of San Salvador as it brushed past, said Quincy Poitier, who answered the phone at the Riding Rock Inn Resort And Marina, but there were no reports of injuries.

"Most certainly I am relieved. We are tranquil," said Stephen Russell, interim director of the Bahamas National Emergency Management Agency.

But he was already worried about Ike and Tropical Storm Josephine behind it.

"As soon as we are clear with Hanna, we have to turn our eyes now on Ike, a powerful one coming ashore," Russell said.

By Thursday afternoon, Ike had maximum sustained winds near 135 mph. It was centered 475 miles north-northeast of the Leeward Islands and forecasters said it could reach the Bahamas by late Sunday or Monday.

Ike is the third major hurricane of the Atlantic season, which runs from June 1 to Nov. 30. The other two were Bertha and Gustav, which was blamed for 112 deaths in the Caribbean, including 76 in Haiti.

Josephine followed behind, with maximum sustained winds near 45 mph.

"We've got three of them on the way. We've just got to be prepared," said Frank Augustine, a 47-year convenience store manager, as he bought 10 five-gallon water jugs under blue skies at a Nassau depot.

Forecasters said it was too early to say if and where Ike might threaten land. FEMA was sending hundreds of truckloads of meals, water and other supplies to the East Coast, agency officials said, but also leaving significant resources on the Gulf Coast in case Ike heads there.

The latest storms come on the heels of Gustav, whose aftermath had Louisiana residents living in shelters and without power.

In 2004, Paulison, then the preparedness director of FEMA, said three major hurricanes in just over a month had strained - but did not ultimately hobble - the agency's resources and staffing.

On Thursday, FEMA officials said they prepared in advance for this season, sending teams to Louisiana while others planned for Hanna.

The American Red Cross was moving supplies, equipment and people into areas Hanna might hit. The organization also was borrowing money to cover expenses that could reach more than $70 million from feeding and sheltering people during Gustav. The organization will probably go deeper into debt as it prepares for the other storms threatening the United States, said Red Cross vice president Joseph Becker.

Only a few dozen of the Bahamas' roughly 700 islands are inhabited, but they are near sea level and have little natural protection. In the south, Hanna knocked out electricity in Mayaguana Island and forced the closure of some small airports including those in Long Island and Acklins Island.