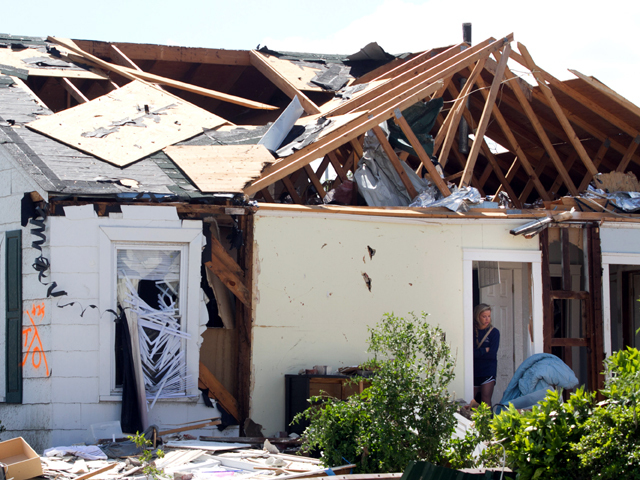 PLEASANT GROVE, Ala. - Firefighters searched one splintered pile after another for survivors Thursday, combing the remains of houses and neighborhoods pulverized by the nation's deadliest tornado outbreak in almost four decades. At least 290 people were killed across six states — more than two-thirds of them in Alabama, where large cities bore the half-mile-wide scars the twisters left behind.

The death toll from Wednesday's storms seems out of a bygone era, before Doppler radar and pinpoint satellite forecasts were around to warn communities of severe weather. Residents were told the tornadoes were coming up to 24 minutes ahead of time, but they were just too wide, too powerful and too locked onto populated areas to avoid a horrifying body count.

"These were the most intense super-cell thunderstorms that I think anybody who was out there forecasting has ever seen," said meteorologist Greg Carbin at the National Weather Service's Storm Prediction Center in Norman, Okla.

"If you experienced a direct hit from one of these, you'd have to be in a reinforced room, storm shelter or underground" to survive, Carbin said.

The storms seemed to hug the interstate highways as they barreled along like runaway trucks, obliterating neighborhoods or even entire towns from Tuscaloosa to Bristol, Va. One family rode out the disaster in the basement of a funeral home, another by huddling in a tanning bed.

In Concord, a small town outside Birmingham that was ravaged by a tornado, Randy Guyton's family got a phone call from a friend warning them to take cover. They rushed to the basement garage, piled into a Honda Ridgeline and listened to the roar as the twister devoured the house in seconds. Afterward, they saw daylight through the shards of their home and scrambled out.

"The whole house caved in on top of that car," he said. "Other than my boy screaming to the Lord to save us, being in that car is what saved us."

"To me it sounded like destruction," the 22-year-old said. "It was a mean, mean roar. It was awful."

At least three people died in a Pleasant Grove subdivision southwest of Birmingham, where residents trickled back Thursday to survey the damage. Greg Harrison's neighborhood was somehow unscathed, but he remains haunted by the wind, thunder and lightning as they built to a crescendo, then suddenly stopped.

"Sick is what I feel," he said. "This is what you see in Oklahoma and Kansas. Not here. Not in the South."

Officials say at least 290 people died, 204 of them in Alabama. There were 33 deaths in Mississippi, 33 in Tennessee, 14 in Georgia, five in Virginia and one in Kentucky. Hundreds if not thousands of people were injured — 600 in Tuscaloosa alone.

Some of the worst damage was about 50 miles southwest of Pleasant Grove in Tuscaloosa, a city of more than 83,000 that is home to the University of Alabama. The storms destroyed the city's emergency management center, so the school's Bryant-Denny Stadium was turned into a makeshift one. School officials said two students were killed, though they did not say how they died. Finals were canceled and commencement was postponed.

A tower-mounted news camera there captured images of an astonishingly thick, powerful tornado flinging debris as it leveled neighborhoods.

That twister and others Wednesday were several times more severe than a typical tornado, which is hundreds of yards wide, has winds around 100 mph and stays on the ground for a few miles, said research meteorologist Harold Brooks at the Storm Prediction Center.

"There's a pretty good chance some of these were a mile wide, on the ground for tens of miles and had wind speeds over 200 mph," he said.

The loss of life is the greatest from an outbreak of U.S. tornadoes since April 1974, when 329 people were killed by a storm that swept across 13 Southern and Midwestern states.

Brooks said the tornado that struck Tuscaloosa could be an EF5 — the strongest category of tornado, with winds of more than 200 mph — and was at least the second-highest category, an EF4.

Search and rescue teams fanned out to dig through the rubble of devastated communities that bore eerie similarities to the Gulf Coast after Hurricane Katrina in 2005, when town after town lay flattened for nearly 90 miles.

In Phil Campbell, a small town of 1,000 in northwest Alabama where 26 people died, the grocery store, gas stations and medical clinic were destroyed by a tornado that Mayor Jerry Mays estimated was a half-mile wide and traveled some 20 miles.

"We've lost everything. Let's just say it like it is," Mays said. "I'm afraid we might have some suicides because of this."

President Obama said he would travel to Alabama on Friday to view storm damage and meet Gov. Robert Bentley and affected families. As many as a million homes and businesses there were without power, and Bentley said 2,000 National Guard troops had been activated to help. The governors of Mississippi and Georgia also issued emergency declarations for parts of their states.

"We can't control when or where a terrible storm may strike, but we can control how we respond to it," Mr. Obama said. "And I want every American who has been affected by this disaster to know that the federal government will do everything we can to help you recover and we will stand with you as you rebuild."

The storm prediction center said it received 164 tornado reports around the region, but some tornadoes were probably reported multiple times and it could take days to get a final count.

In fact, Brooks said 50 to 60 reports — from the Mississippi-Alabama line, through Tuscaloosa and Birmingham and into Georgia and southwestern Tennessee — might end up being a single tornado. If that's true its path would be one of the longest on record for a twister, rivaling a 1925 tornado that raged for 219 miles.

Brooks said the weather service was able to provide about 24 minutes' notice before the twisters hit.

"It was a well-forecasted event," Brooks said. "People were talking about this week being a big week a week ago."

Gov. Bentley said forecasters did a good job alerting people, but there's only so much they can do to help people prepare.

Carbin, the meteorologist, noted that the warning gave residents enough time to hunker down, but not enough for them to safely leave the area.

"You've got half an hour to evacuate the north side of Tuscaloosa. How do you do that and when do you do that? Knowing there's a tornado on the ground right now and the conditions in advance of it, you may inadvertently put people in harm's way," he said.

Officials said at least 13 died in Smithville, Miss., where devastating winds ripped open the police station, post office, city hall and an industrial park with several furniture factories. Pieces of tin were twined high around the legs of a blue water tower, and the Piggly Wiggly grocery store was gutted.

"It's like the town is just gone," said 24-year-old Jessica Monaghan, wiping away tears as she toted 9-month-old son Slade Scott. The baby's father, Tupelo firefighter Tyler Scott, was at work when the warning came on the TV.

"It said be ready in 10 minutes, but about that time, it was there," Monaghan said. She, Slade and the family's cat survived by hiding in a closet.

At Smithville Cemetery, even the dead were not spared: Tombstones dating to the 1800s, including some of Civil War soldiers, lay broken on the ground. Brothers Kenny and Paul Long dragged their youngest brother's headstone back to its proper place.

Unlike many neighboring towns, Kenny Long said, Smithville had no storm shelter.

"You have warnings," Long said, "but where do you go?"

Some fled to the sturdy center section of Smithville Baptist Church. Pastor Wes White said they clung to each other and anything they could reach, a single "mass of humanity" as the building disintegrated around them.

The second story is gone, the walls collapsed, but no one there was seriously hurt. The choir robes remained in place, perfectly white.

Seven people were killed in Georgia's Catoosa County, including Ringgold, where a suspected tornado flattened about a dozen buildings and trapped an unknown number of people.

"It happened so fast I couldn't think at all," said Tom Rose, an Illinois truck driver whose vehicle was blown off the road at I-75 North in Ringgold, near the Tennessee line.

Catoosa County Sheriff Phil Summers said several residential areas had "nothing but foundations left," and that some people reported missing had yet to be found.

In Trenton, Ga., nearly two dozen people took shelter in an Ace Hardware store, including a couple walking by when an employee emerged and told them to take cover immediately.

Lisa Rice, owner of S&L Tans in Trenton, survived by climbing into a tanning bed with her two daughters. Stormy, 19, and Sky, 21.

For 30 seconds, wind rushed around the bed and debris flew as wind tore off the roof.

"Then it just stopped. It got real quiet. We waited a few minutes and then opened up the bed and we saw daylight," she said.

The badly damaged Moore Funeral Home, meanwhile, sheltered the woman who cleans Larry Moore's family business. When the first of three storms hit and uprooted trees in her yard, she figured the funeral home would be a safer place for her two children. As shingles began sailing past the window, she headed for the basement.

"That's what saved her, I guess," Moore said. "It was over in just a matter of seconds. She called 911 and emergency crews had to help her get out."

The storm system spread destruction from Texas to New York, where dozens of roads were flooded or washed out.

In a large section of eastern Tennessee, officials were looking for survivors and assessing damage. In hard-hit Apison, an unincorporated community near the Georgia state line where eight people died, about 150 volunteers helped with the search.

It was unclear how high the death toll could rise. In Mississippi, Lee County Sheriff Jim Johnson and a crew of deputies and inmates searched the rubble, recovering five bodies and marking homes that still had bodies inside with two large orange Xs.

"I've never seen anything like this," Johnson said. "This is something that no one can prepare for."