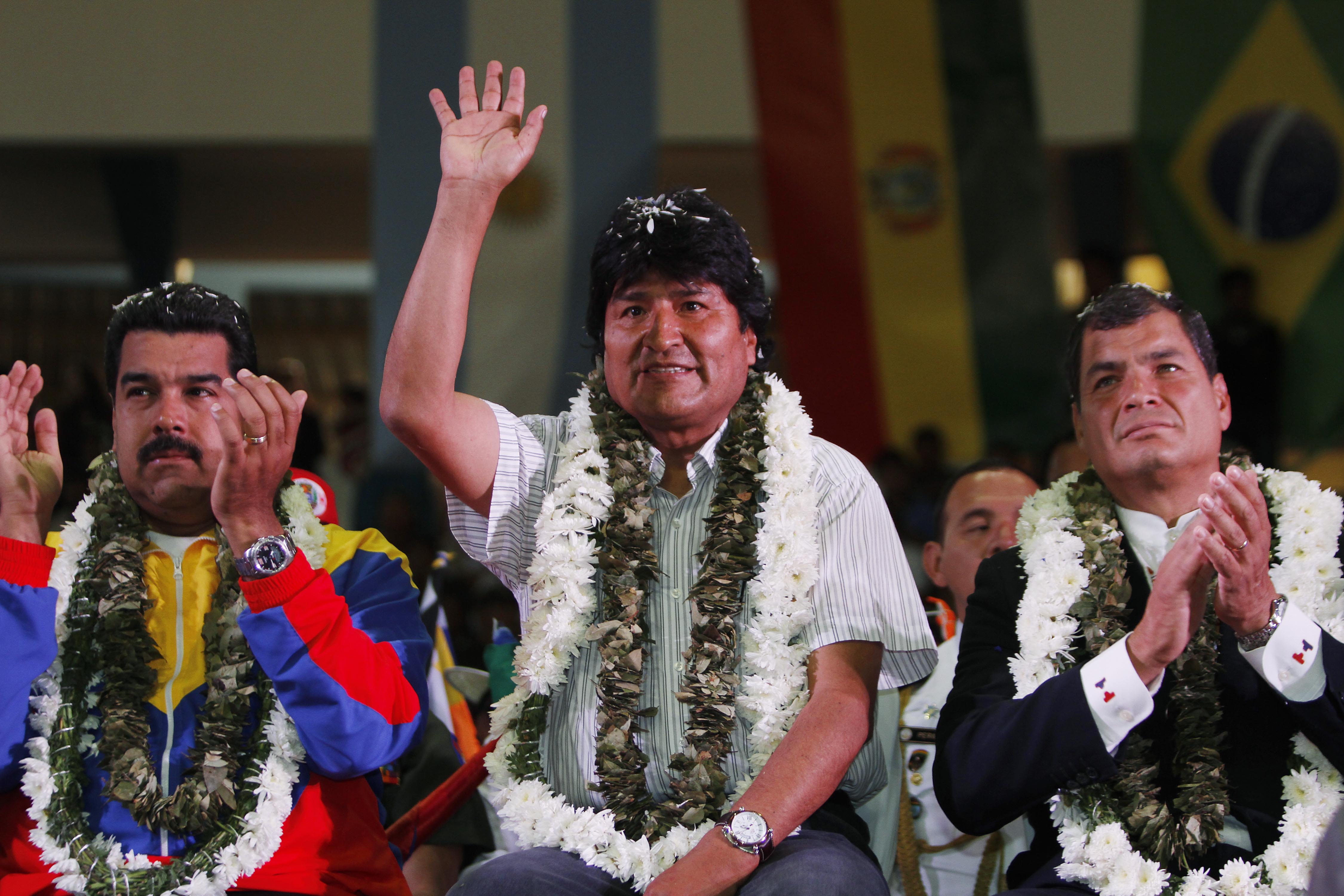 COCHABAMBA, Bolivia President Evo Morales warned on Thursday that he could close the U.S. Embassy in Bolivia, as South America's leftist leaders rallied to support him after his presidential plane was rerouted amid suspicions that NSA leaker Edward Snowden was on board.

Morales again blamed Washington for pressuring European countries to refuse to allow his plane to fly through their airspace on Tuesday, forcing it to land in Vienna, Austria, in what he called a violation of international law. He had been returning from a summit in Russia during which he had suggested he would be willing to consider a request from Snowden for asylum.

Morales made his announcement Thursday as the leaders of Venezuela, Ecuador, Argentina and Uruguay joined him in Cochabamba, Bolivia for a special meeting to address the diplomatic row.

Latin American leaders were outraged by the incident, calling it a violation of national sovereignty and a slap in the face for a region that has suffered through humiliations by Europe and several U.S.-backed military coups.

Morales' government has had a conflictive relationship with Washington.

It expelled the U.S. ambassador and agents of the U.S. Drug Enforcement Administration in 2008 for allegedly inciting the opposition. The Andean nation restored full diplomatic ties with the U.S. in 2011. But relations soured again amid mutual distrust on drug war politics and hit an especially low point after Secretary of State John Kerry referred to Latin America as Washington's "backyard" in April 2013.

Morales expelled the U.S. Agency for International Development in May for allegedly seeking to undermine his government.

Ecuadorean President Rafael Correa said Thursday that he and other leaders were offering full "support" to Morales following the rerouting of the plane, calling it an aggression against the Americas.

Argentine President Cristina Fernandez said Latin Americans treasured freedom after fighting for their independence from Europe in the 19th century and then surviving Washington's 20th-century history of backing repressive regimes in the Americas.

She then demanded an apology for the plane ordeal.

"I'm asking those who violated the law in calm but serious manner, to take responsibility for the errors made, it's the least they can do," Fernandez said. "To apologize for once in their life, to say their sorry for what they've done."

Morales has said that while the plane was parked in Vienna, the Spanish ambassador to Austria arrived with two embassy personnel and they asked to search the plane. He said he denied them permission.

"Who takes the decision to attack the president of a South American nation?" Maduro asked. Spanish Prime Minister Mariano "Rajoy has been abusive by trying to search Morales' plane in Spain. He has no right to breach international law."

Morales, long a fierce critic of U.S. policy toward Latin America, received a hero's welcome in an airport in the Bolivian capital of La Paz late Wednesday night. His return followed the dramatic, unplanned 14-hour layover in Vienna.

Bolivia's government said France, Spain and Portugal refused to let the president's plane through their airspace because of suspicions that Snowden was with Morales.

Ahead of the meeting, Morales had said that his ordeal was part of a plot by the U.S. to intimidate him and other Latin American leaders.

He urged European nations to "free themselves" from the United States. "The United States is using its agent (Snowden) and the president (of Bolivia) to intimidate the whole region," he said.

France sent an apology to the Bolivian government. But Morales said "apologies are not enough because the stance is that international treaties must be respected."

Spain's Foreign Affairs Minister Jose Manuel Garcia-Margallo said his country did not bar Morales from landing in its territory.

Amid the tensions, the U.S. embassy in La Paz cancelled Independence Day celebrations scheduled for Thursday. In the eastern city of Santa Cruz, Bolivian government sympathizers painted protest slogans on the doors of the American consulate.

Morales said he never saw Snowden when he was in Russia, and that Bolivia had not received a formal request for asylum for him.

Bolivia has said that it will summon the French and Italian ambassadors and the Portuguese consul to demand explanations.

Despite the complaints, there were no signs that Latin America leaders were moving to bring Snowden to the region that had been seen as the most likely to grant him asylum.

All of the region's leaders are not expected at the summit.

Brazil was represented at the meeting by Marco Aurelio Garcia, President Dilma Rousseff's top international adviser. He traveled to Cochabamba with government officials, although Foreign Minister Antonio Patriota missed the summit because he is currently attending meetings in Europe.

The presidents of Colombia, Chile and Peru, who have strong ties to the U.S., were not attending.

Colombian President Juan Manuel Santos said earlier on Thursday that he supports Morales, but asked other leaders to remain cool and avoid an escalating dispute between Latin America and the European Union.

"We're in solidarity with Evo Morales because what they did to him is unheard-of, but let's not let this turn into a diplomatic crisis for Latin America and the EU," Santos wrote Thursday on Twitter.

It's still unclear whether European countries did block the plane and, if so, why. French, Spanish and Portuguese officials have all said the plane was allowed to cross their territory.

The emergency stop in Austria may have been caused by a row over where the plane could refuel and whether European authorities could inspect it for signs of Snowden.

The U.S. has declined to comment on whether it was involved in any decision to close European airspace, saying only that "US officials have been in touch with a broad range of countries over the course of the last 10 days," about the Snowden case.

"The message has been communicated both publicly and privately," State Department spokeswoman Jen Psaki said Wednesday. "He should be returned to the United States."

Snowden remains out of public view, believed to be stuck in a Moscow airport transit area, seeking asylum from one of more than a dozen countries.