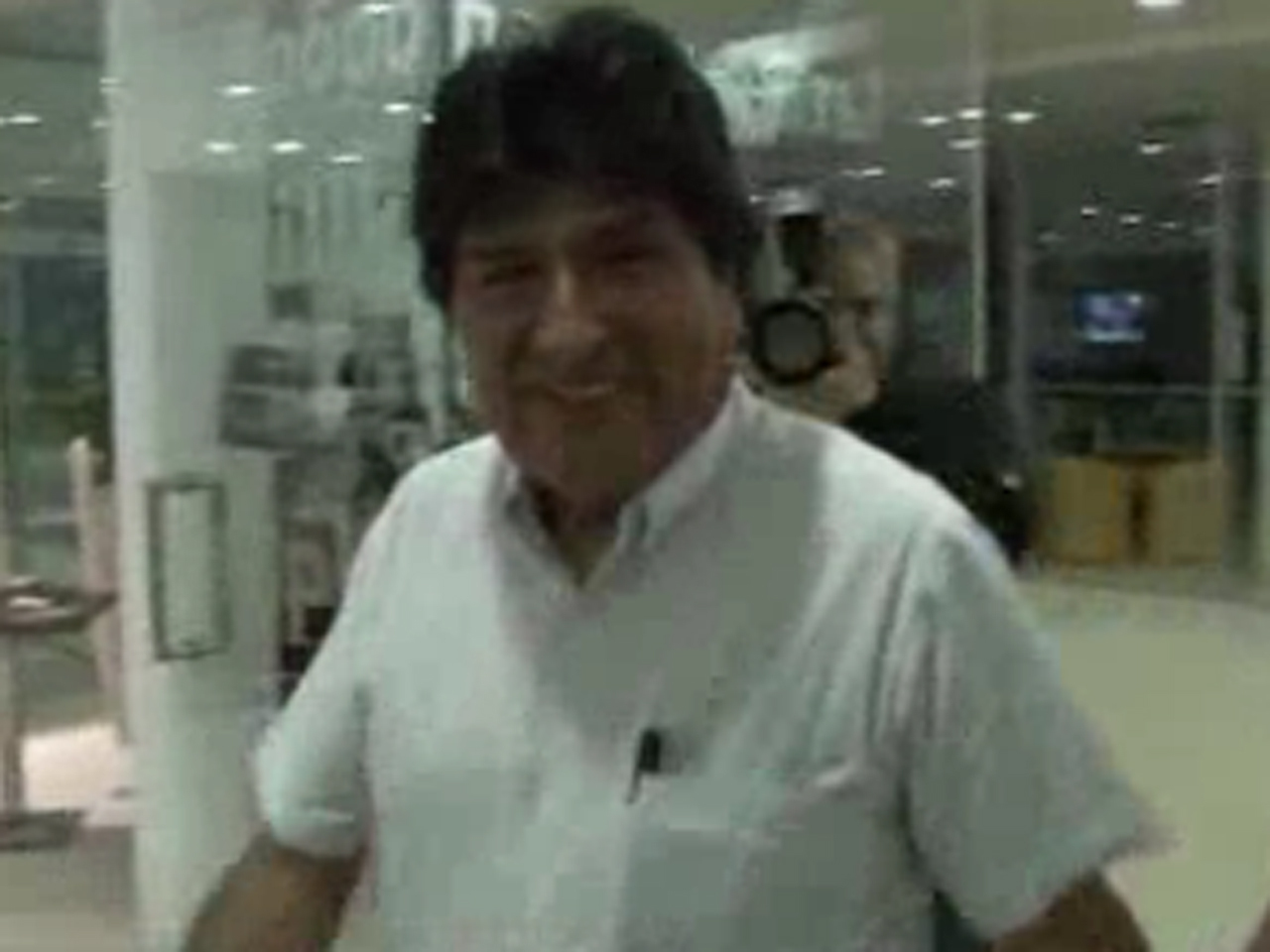 VIENNA The plane carrying Bolivian President Evo Morales was rerouted to Austria after various European countries refused to let it cross their airspace because of suspicions that NSA leaker Edward Snowden was on board, Bolivian officials said Tuesday.

Officials in both Austria and Bolivia said Snowden was not on the plane, which was taking Morales home from a summit in Russia, where he had suggested that his government would be willing to consider granting asylum to the American. The plane left Vienna for Bolivia Wednesday.

A furious Bolivian Foreign Minister David Choquehuanca said on Tuesday that France and Portugal would have to explain why they canceled authorization for the plane, claiming that the decision had put the president's life at risk.

"We don't know who invented this lie" that Snowden was traveling with Morales, Choquehuanca said in La Paz. "We want to denounce to the international community this injustice with the plane of President Evo Morales."

In a midnight press conference, Bolivian Vice President Alvaro Garcia said that not only France and Portugal, but also Italy and Spain were denying the plane permission to fly through their airspace.

He described Morales as being "kidnapped by imperialism" in Europe.

"The ambassador for Spain in Austria has just informed us that there is no authorization to fly over Spanish territory and that at 9 a.m. Wednesday they would be in contact with us again," said Defense Minister Ruben Saavedra, adding that the Spanish government had put as a condition for passage the "revision of the presidential plane."

Earlier, Choquehuanca said that Spain's government allowed Morales' plane to refuel in its territory before flying on to Vienna.

An official with Spain's foreign ministry said Wednesday that the country on Tuesday authorized Morales' plane to fly within its airspace and to make a refueling stop. The official said Bolivia asked again this morning for permission and got it. She spoke on condition of anonymity because of department rules.

French officials are denying that France refused to let Morales' plane cross over French airspace. Officials at Portugal's Foreign Ministry and National Civil Aviation Authority could not be reached to comment.

The Austrian Foreign Ministry told reporters Snowden was not with Morales. Reuters adds that Austria's foreign minister said his nation let the plane land because it didn't share concerns Snowden was on board.

Leaks by Snowden, a former NSA systems analyst, have revealed the NSA's sweeping data collection of U.S. phone records and some Internet traffic, though U.S. intelligence officials have said the programs are aimed at targeting foreigners and terrorist suspects mostly overseas.

He is believed to be in a Moscow airport transit area, seeking asylum from one of more than a dozen countries.

While Bolivia's foreign minister had earlier said officials did not know who was behind the "lie" that Snowden was on Morales' plane, the country's defense minister later expressed no doubt.

"We want to declare very firmly that it was an American story that Edward Snowden was on this flight," said Saavedra at the VIP terminal of Vienna's airport. "This is a plot by the U.S. government to destroy president Morales' image. We say this simply is a lie. And we will confirm this."

Morales himself was present during the improvised press conference but chose not to speak to reporters. Morales will remain at the airport until his plane has been cleared for takeoff.

In Washington, the State Department would not comment directly when asked to speak to the matter and referred the AP to statements on Snowden made at the department's daily briefing. Earlier Tuesday, department spokesman Patrick Ventrell would not discuss how the Obama administration might respond if Snowden left the Moscow airport. "We're not there yet," he said.

Snowden has applied for asylum in Venezuela, Bolivia and 18 other countries, according to WikiLeaks, a secrets-spilling website that has been advising him. Many European countries on the list -- including Austria, Finland, Ireland, the Netherlands, Norway, Spain and Switzerland -- said he would have to make his request on their soil.

One of Snowden's best chances of finding refuge outside the United States may hinge on Venezuelan President Nicolas Maduro, who was also in Russia on Tuesday.

Maduro told Russian reporters that his country has not received an application for asylum from Snowden and dodged the question of whether he would take him with him when he left.

"Who must protect Snowden? This is the question. This young man of 29 was brave enough to say that we need to protect the world from the American imperial elite, so who should protect him?" Maduro said in response to a question from journalists covering a ceremony to rename a Moscow street after late Venezuelan President Hugo Chavez. "All of mankind, people all over the world must protect him."

Maduro was scheduled to spend Wednesday in neighboring Belarus before returning to Venezuela.

In Venezuela, Foreign Minister Elias Jaua said that changing the flight's route without checking on how much fuel it had endangered Morales' life.

"All the countries that have denied permission for the flight of our brother president, Evo Morales, must be held responsible for his life and his dignity as president."

Another possible landing spot for Snowden is Ecuador, where Wikileaks founder and publisher Julian Assange has been seeking asylum.

"We are willing to analyze Mr. Snowden's request for asylum and this position has not changed," said Ecuadorean Foreign Minister Ricardo Patino on Tuesday. "What we have said is that we will be able to analyze the request when Mr. Snowden is in Ecuadorean territory or in an Ecuadorean mission."

Patino added that, two weeks ago, a hidden microphone was found in Ecuador's embassy in London, where Assange is holed up. "We want to find out with precision what the origin of the apparatus is."

Snowden, who recently turned 30, withdrew a bid for asylum in Russia when he learned the terms Moscow had set out, according to Putin's spokesman Dmitry Peskov. Putin said on Monday that Russia was ready to shelter Snowden as long as he stopped leaking U.S. secrets.

Rebuffed by Russia's president, the Obama administration has recently toned down demands Snowden be expelled from the Moscow airport in a sign the U.S. believes he is not worth scuttling diplomatic relations between the former Cold War enemies.

On Monday, WikiLeaks posted a statement attributed to Snowden on its website that slams Mr. Obama for "using citizenship as a weapon."

"Although I am convicted of nothing, (the United States) has unilaterally revoked my passport, leaving me a stateless person," Snowden says in the statement. "Without any judicial order, the administration now seeks to stop me exercising a basic right. A right that belongs to everybody. The right to seek asylum.

"Their purpose is to frighten, not me, but those who would come after me."