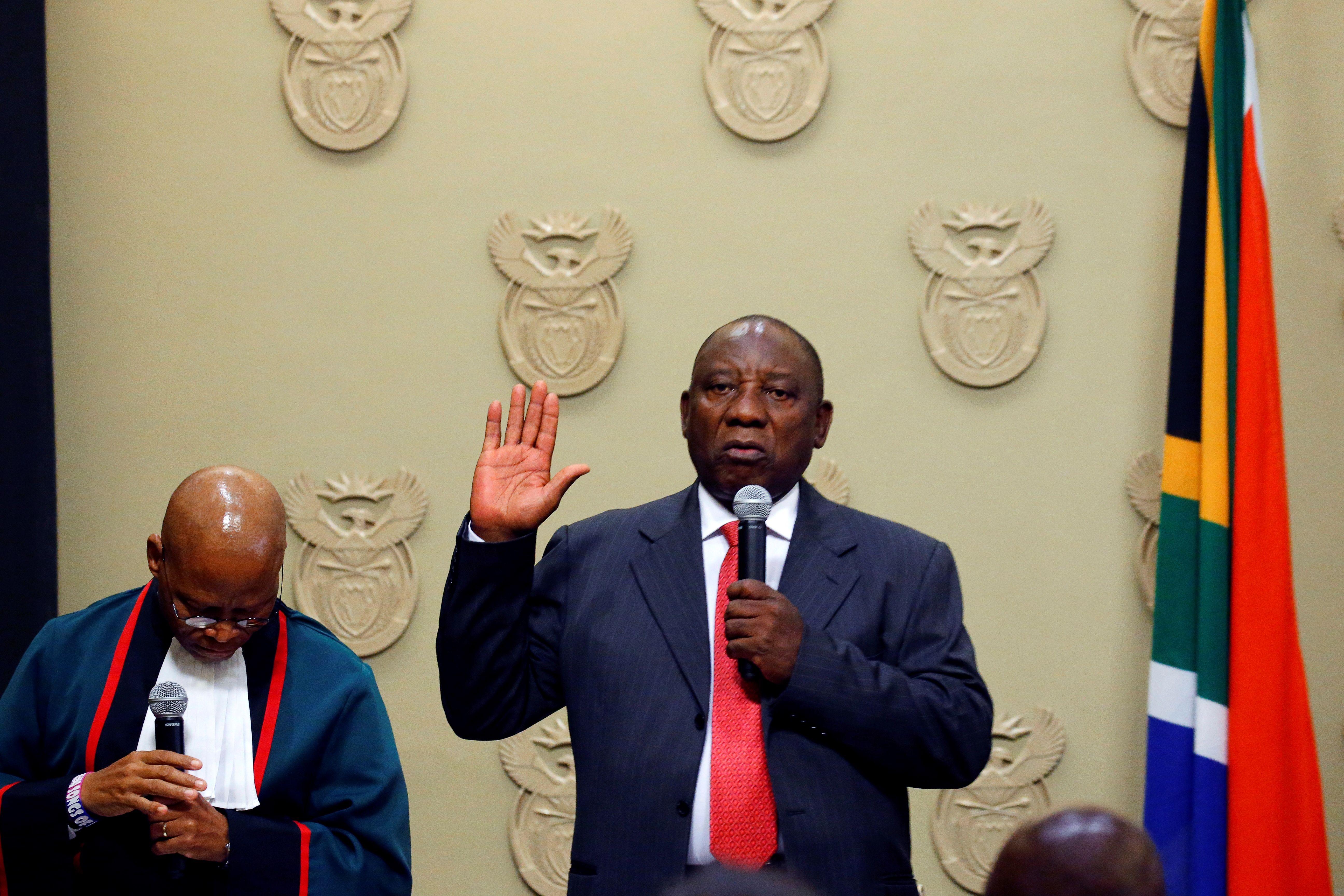 JOHANNESBURG -- Cyril Ramaphosa on Thursday was sworn in as South Africa's new president after the resignation of Jacob Zuma, whose scandals brought the storied African National Congress to its weakest point since taking power at the end of apartheid.

"I will try very hard not to disappoint the people of South Africa," Ramaphosa said in ending his speech to parliament shortly after ruling party lawmakers elected him. He said the issue of corruption is on "our radar screen."

Ramaphosa was the only candidate nominated for election after two opposition parties said they would not participate. The two parties instead unsuccessfully called for the dissolution of the National Assembly and early elections.

Chief Justice Mogoeng Mogoeng presided over the parliamentary election and congratulated Ramaphosa, who had been Zuma's deputy and in December was narrowly elected leader of the ruling party over Zuma's ex-wife.

Zuma resigned after years of scandals that damaged the reputation of the ruling ANC, which had instructed him this week to step down or face a parliamentary motion of no confidence that he would almost certainly lose. Zuma denies any wrongdoing.

Ramaphosa is South Africa's fifth president since the end of the apartheid system of white minority rule in 1994. On Friday evening, he is expected to deliver the state of the nation address that had been postponed during the ruling party's days of closed-door negotiations to persuade Zuma to resign.

As some South Africans cheered the end to Zuma's era, the rand currency strengthened against the dollar in early trading Thursday.

The country's main opposition party, the Democratic Alliance, will cooperate with Ramaphosa if he acts in the interests of the South African people, said party leader Mmusi Maimane.

"We will hold you accountable and I will see you in 2019 on the ballot box," Maimane said.

Members of a smaller opposition party walked out of parliament before the election, saying the ANC plan to choose a new president was "illegitimate."

Julius Malema, leader of the Economic Freedom Fighters party, said ANC lawmakers had failed to hold former Zuma to account for alleged corruption and had therefore violated the constitution.

Ramaphosa now is challenged with reviving the reputation of the ANC, Africa's most prominent liberation movement, which fought apartheid and has been in power since the first all-race elections in 1994. The party's popularity fell as anger over corruption allegations grew and it suffered its worst showing at the polls in municipal elections in 2016.

The prospect of facing a possible coalition government for the first time helped push some ANC leaders to decide that Zuma had to go.

On Thursday the foundation of Nelson Mandela, South Africa's first black president, welcomed Zuma's departure but said the state must act against "networks of criminality" that have hurt the country's democracy.

As the country marks the centenary of Mandela's 1918 birth, "there is a need to reckon with the failures of the democratic era," the foundation said. "We believe that we are at a critical moment in our history, one which offers us the unique opportunity to reflect, to rebuild, and to transform."