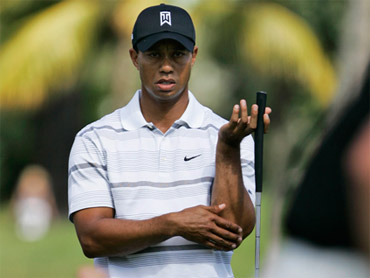 A Canadian doctor who has treated golfer Tiger Woods and many other pro athletes is under a joint U.S.-Canadian investigation for possibly providing performance-enhancing drugs, a U.S. official said.

One source describes the FBI investigation as "preliminary" and says it's a "stretch" to link the probe to Woods. Officials indicate they are still trying to determine if U.S. laws were violated by Galea, reports CBS News correspondent Kelly Wallace.

An agent for Tiger Woods vehemently denied the golfer received any illegal treatments from Galea.

"The treatment Tiger received is a widely accepted therapy and to suggest some connection with illegality is recklessly irresponsible," Mark Steinberg said Tuesday in a press release.

The official familiar with the investigation said Canadian authorities have been investigating Dr. Anthony Galea, who was arrested Oct. 15 in Toronto, and the FBI has been brought into the case.

The official said Tuesday the investigation was being conducted by the Royal Canadian Mounted Police. The official was not authorized to discuss the case and therefore spoke on condition of anonymity.

The New York Times first reported on the investigation. Galea's lawyer denied any wrongdoing at a news conference in Toronto on Tuesday.

Attorney Brian H. Greenspan said he expects Galea will face three charges in Canadian court Friday, but said he was unaware of the FBI's involvement.

"He looks forward to being vindicated," Greenspan said. "He's a physician who has always engaged in lawful practices. He's never been involved in any improprieties, any misconduct, any unlawful conduct."

Greenspan said one charge would be for conspiracy, with the other two coming under the Food and Drug Act and the Controlled Substances Act. He did not know the specific charges.

"We can't conceive of them being anything other than minor," he said.

RCMP spokesman Sgt. Marc LaPorte said Galea was arrested in October after a search warrant was executed at the Institute of Sports Medicine Health and Wellness Centre near Toronto.

Greenspan said the investigation began when the doctor's assistant, who often drove around Galea, was stopped at the Canada-U.S. border. Human growth hormone and Actovegin, a drug extracted from calf's blood, were found in Galea's bag in the car, The Times reported.

Greenspan confirmed Galea has used HGH himself and prescribed it to non-athlete patients over the age of 40 to improve their quality of life, but said he has never given it to athletes.

"It's a therapeutic substance that extends life, and in his view the literature supports the prudent use of HGH in older people that enhances their general health," he said.

The Times reported that Galea visited Woods' home in Florida at least four times in February and March to provide platelet-rich plasma therapy after his agents at International Management Group became concerned by the golfer's slow recovery from June 2008 knee surgery.

"The New York Times is flat wrong, no one at IMG has ever met or recommended Dr. Galea, nor were we worried about the progress of Tiger's recovery, as the Times falsely reported," Steinberg said.

In the therapy, the patient's blood is drawn and put through a centrifuge that separates out the platelets, which are then injected into the area of the injury. The platelets contain growth factors that can heal tissue, said Dr. Allan Mishra, an orthopedic surgeon at the Stanford University Medical Center and one of the leading researchers in the field.

Mishra said research is ongoing, but the therapy has proved successful at treating ailments such as tennis elbow. Starting Jan. 1, the World Anti-Doping Agency is banning the re-injection of platelets into muscles because that may aid in building muscles. But athletes can still inject them into joints and tendons to help recovery from injury if they follow procedures to declare the use to WADA.

Woods announced Friday that he was taking an indefinite leave from golf to concentrate on his marriage after he admitted to marital infidelity. Greenspan suggested his client's case was receiving outsized attention because of the scandal swirling around Woods.

"It's tragic that it happens to come unfortunately at a time when one of his patients is suffering through a media frenzy, which as a result has put him in the eye of the storm as well," he said.

"Excluding draining my knee, he has never treated me, but I did see his chiropractor who did soft-tissue work on my leg," she said in an e-mail to the newspaper. "That was the extent of my visit with him."

Her agent, Evan Morgenstein, told the AP that Torres was not available for comment Monday night.

Former NFL player Bill Romanowski, who now runs a nutritional sports supplement business called Nutrition 53, says he knows Dr. Galea, and that his methods are completely above board. "This is not about performance, this is 100 percent about healing," Romanowski told Wallace.

The International Olympic Committee became concerned about Actovegin in 2000 after it appeared during that year's Tour de France, said Dr. Gary Wadler, who leads the committee that determines the World Anti-Doping Agency's banned-substances list.

The drug was placed on the banned list, then removed a year later because more evidence was needed as to whether it was performance-enhancing or damaging to athletes' health, he said.

"It doesn't seem to have been a major issue in recent times," Wadler said.