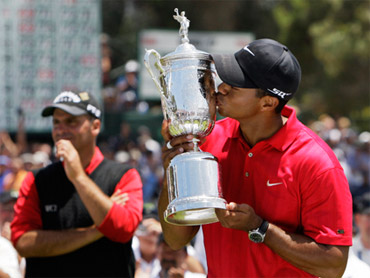 A Canadian doctor who has treated golfer Tiger Woods, swimmer Dara Torres and NFL players is suspected of providing athletes with performance-enhancing drugs, according to a newspaper report.

Human growth hormone and Actovegin, a drug extracted from calf's blood, were found in Dr. Anthony Galea's bag at the U.S.-Canada border in late September, The New York Times reported. He was arrested on Oct. 15 in Toronto by Canadian police.

There's no proof Woods was given the drugs, reports CBS News correspondent Mark Phillips, but it's more bad publicity he certainly doesn't need.

According to the newspaper, Galea has developed a blood-spinning technique — platelet-rich plasma therapy — to help speed post-surgery recovery.

Galea visited Woods' home in Florida at least four times in February and March, the newspaper reported, to provide that platelet therapy after his agents were concerned by his slow recovery from June 2008 knee surgery.

The Times reported that "Dr. Galea said Mr. Woods was referred to him by the golfer's agents at Cleveland-based International Management Group, who were alarmed at the slow pace of Mr. Woods's rehabilitation after knee surgery in June 2008. … When asked for comment about Mr. Woods's involvement with Dr. Galea, Mark Steinberg, of I.M.G., responded in an e-mail message: 'I would really ask that you guys don't write this? If Tiger is NOT implicated, and won't be, let's please give the kid a break.'"

Steinberg later released a statement saying that the Times is "flat wrong. No one at IMG has ever met or recommended Dr. Galea, nor were we worried about the progress of Tiger's recovery, as the Times falsely reported. The treatment Tiger received is a widely accepted therapy and to suggest some connection with illegality is recklessly irresponsible."

Woods announced last Friday he was taking an indefinite leave from golf to concentrate on his marriage after recent allegations of infidelity.

Torres, the first American to swim in five Olympics, told the newspaper Galea found a previously undiagnosed tear in her quad tendon.

"Excluding draining my knee, he has never treated me, but I did see his chiropractor who did soft-tissue work on my leg," she said in an e-mail to the Times. "That was the extent of my visit with him."

Her agent, Evan Morgenstein, told the AP that Torres was not available for comment on Monday.

"Dr. Galea was never engaged in any wrongdoing or any impropriety," Greenspan said. "Not only does he have a reputation that is impeccable, he is a person at the very top of his profession."

While acknowledging he used HGH himself for 10 years, Galea told the newspaper he never gave any athletes the substance, which was banned by the World Anti-Doping Agency. And Galea told the Times he has never combined HGH or Actovegin with his platelet treatments.

"All these athletes come see me in Canada cause I fix them, and I think people just assume that I'm giving them stuff," he told the newspaper. "They don't have to come to me to get HGH and steroids. You can walk into your local gym in New York and get HGH."

Prescribing HGH is legal in Canada; it can be used in the United States but only in a few instances that don't include hastening recovery from surgery.

The Royal Canadian Mounted Police said no charges have been filed yet against Galea. A court date is set for Friday in Toronto.