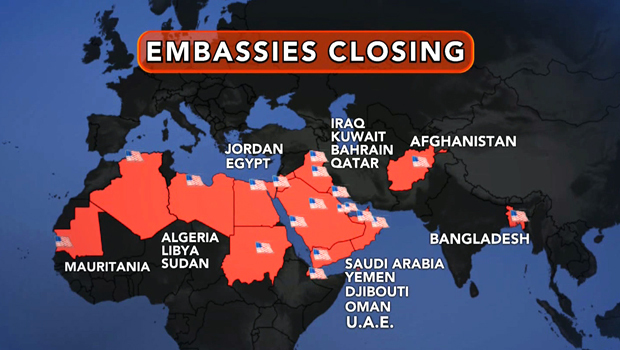 Intelligence officers have reporting from a reliable source that a major plot is under way and that the team to carry it out has been selected and is in place, Miller reports.

The threat information has been described as the most specific and credible since the foiled plot to blow up British planes en route to the United States in 2006, Miller reports. The specificity ends there.

What authorities don't have is the date, the timing or the target of the attack, which is why they have taken such an approach to warning potential targets, Miller reports.

The threat has prompted the U.S. to issue a global travel alert to all Americans for the first time since the 10th anniversary of the Sept. 11, 2001, terror attacks.

In a statement released Saturday night, the White House announced Mr. Obama was briefed again by National Security Adviser Susan Rice and Lisa Monaco, his counterterrorism and homeland security adviser, after Rice chaired a meeting of top officials to review the threat.

Worldwide, 22 U.S. embassies and consulates are preparing to close their doors Sunday.

The State Department says there is a potential for a terrorist attack "particularly in the Middle East and North Africa."

Officials have specifically mentioned Yemen as a potential target. The country is home base for Al Qaeda of the Arabian Peninsula, also known as AQAP, a terrorist group that many now consider the most dangerous in the world.

Historically the month of August has been an active one for terrorist organizations.

Fifteen years ago this week, twin U.S. Embassy bombings in Kenya and Tanzania claimed more than 200 lives and injured more than 4,000.

Next month also marks the first anniversary of the Sept. 11 attack on the U.S. Consulate in Benghazi, Libya, which killed four Americans, including the U.S. ambassador.

"But I would say when al Qaeda is ready to attack, it tries to attack," said Zarate. "A challenge for authorities will be understanding what this plot is and if they're not able to divine or ferret out what's happening, at what point they lift the alert and open up the diplomatic doors again."

The travel alert issued for American citizens worldwide warns that both rail and airports could be targeted.

But at Dulles Airport near the nation's capital, the warning is not discouraging passenger Nathan Brandeburg.

"I'm not too afraid to travel, especially with security the way it is," he said. "I mean, we're traveling with a lot of gear as well, and we have to go through all the security, so I know what it's like. It doesn't really bother me too much."