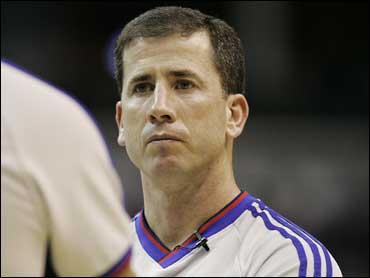 Former NBA referee Tim Donaghy planned to plead guilty in federal court on Wednesday to charges alleging he wagered on games he officiated, a person familiar with the betting scandal probe said.

Donaghy was to turn himself at Brooklyn federal court, the person, who was not authorized to speak about the case, told The Associated Press late Tuesday on condition of anonymity.

NBA spokesman Tim Frank told the AP that the league was informed Tuesday that Donaghy would plead Wednesday but was given no further information.

Besides allegedly placing his own wagers, investigators also examined whether Donaghy provided inside information to others, including referees' schedules. The referee had a gambling problem and was approached by low-level mob associates through an acquaintance, a law enforcement official said.

The FBI first contacted the NBA on June 20 to talk about a referee alleged to be gambling on games, and the two sides met on June 21, Stern said last month. Donaghy resigned July 9 after 13 years as a referee, though Stern said he would have fired him sooner but was told it might affect the investigation.

Stern blamed a "rogue, isolated criminal" for the betting scandal that has devastated the league and threatened the credibility of every referee.

Donaghy, a Delaware County native and graduate of Cardinal O'Hara High School and Villanova University, was rated in the top tier of officials, Stern said, and there was nothing suspicious about the frequency of his foul calls. He was assigned to work in the second round of the playoffs, with his last NBA game coming during the Phoenix-San Antonio Western Conference semifinal.

No other NBA officials or players were expected to be involved in the scandal, which Stern called the "most serious situation and worst situation that I have ever experienced either as a fan of the NBA, a lawyer for the NBA or a commissioner of the NBA."

Others outside the NBA are expected to be charged.