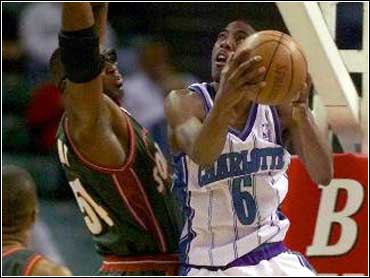 Payton scored 21 of his 32 points in the second half and Seattle rallied for an 84-81 victory Monday night by holding Charlotte to 32 percent shooting in the final two quarters.

"I was amazed when I looked at the stats at halftime and saw we were only down by five points," Seattle coach Paul Westphal said. "I told the guys we could take this game if we could find a way to pick up the energy a little bit and make a few shots."

Payton responded by making eight of 12 field-goal attempts in the second half, including a 5-for-8 showing from 3-point range, as the SuperSonics began a five-game road trip.

"We weren't playing well in the first half but we still stayed in the game. That was a big confidence boost for us," said Payton, who wound up with nine rebounds, eight assists and two steals.

"Payton did us in. When he's hitting 3-pointers, they win," Charlotte coach Paul Silas said after the Hornets lost their third consecutive game and their fifth in seven contests.

Charlotte held Seattle to 33 percent shooting in the first quarter, but the Hornets scored only 20 points in the second, 18 in the third and 16 in the fourth. Charlotte made just six field-goal attempts in each of the final two quarters.

"We're just not putting the ball in the hoop," said Eddie Jones, who led the Hornets with 23 points and five steals. "We're getting good looks but we just can't make shots."

Anthony Mason had 12 points and 13 rebounds, but he also had six turnovers. The most costly came when he threw away an inbounds pass with 5.9 seconds left and Charlotte trailing by three.

Charlotte's errick Coleman had 14 points and eight rebounds midway through the third quarter when he left with a sprained right ankle. He did not return.

"Derrick has been good for 20 points and 10 rebounds," Silas said. "Normally he would have taken charge and we could have counted on him down the stretch."

The Hornets shot 41 percent in the first half and led by five, but made just 12 of 38 field-goal attempts the rest of the way.

There were four lead changes and three ties before Payton stole an errant pass and hit another 3-pointer to put the SuperSonics up 71-68 with 8:50 left in the game. another 3-pointer by Payton gave Seattle its biggest lead, 82-74 at the 2:35 mark.

Jones broke Charlotte's drought of more than four minutes without a field goal by hitting a 3-pointer to cut it to 82-77 with 1:51 remaining.

The closest Charlotte got was 83-81 on Elden Campbell's tip with six seconds to go. A foul shot by Brent Barry accounted for the final margin, and Payton stole Mason's inbounds pass.