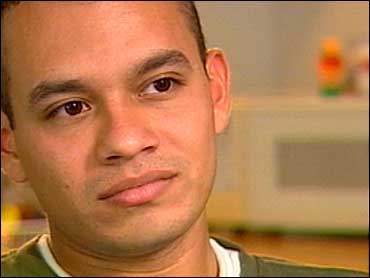 Hidden in a sunny island paradise that lures tourists from all over the world, Correspondent Steve Hartman found a young man in a quiet corner that hardly any tourist ever sees.

Sergio Castillo lives in the only trailer park in Key West, Fla., and although it's no resort, it's four-star compared to where he grew up.

Sergio is from Nicaragua and immigrated to the U.S. just four years ago. It was a life-long dream, going back to his childhood when all he wanted was a pair of shoes.

"Nike shoes," Sergio explains. "I promised myself if I work, I'm going to buy me a pair of shoes like those."

He not only got the shoes, he got the whole department. In Key West, he works full-time at the local shoe store. And for nearly two years, he has worked a second, almost full-time job at the nearby Winn-Dixie grocery store. He says the money from one job pays for all his bills, and the money from the second job he never touches.

What is he saving for?

"Whatever I make is going to help my mom," he says.

Sergio's mom, Manalena, still lives in Nicaragua. When Hartman visited her, she showed him the new roof, the new stucco, the new gates and even the appliances Sergio had shipped from the states.

Today, the place where Sergio grew up is more like a house, but just as obviously much less like a home. The best gift, says his mother, would be Sergio's return.

"To see my son's face, just like every mother who wants to have their child close to them, but can't," she says.

When does Sergio miss his mother the most?

Sergio was able to come to America because his dad was a citizen. His parents divorced, and his mom raised him all by herself. Although his leaving meant her loneliness, she let him go for reasons as pure as parenthood.

"If God permits," Manalena says, "I want my son to touch lives and open doors that would have been impossible for me."

It's funny: We all think of it as the American dream - have a bright future, a better future for your family and yourself - but, really, they dream it just about everywhere.
Written By STEVE HARTMAN