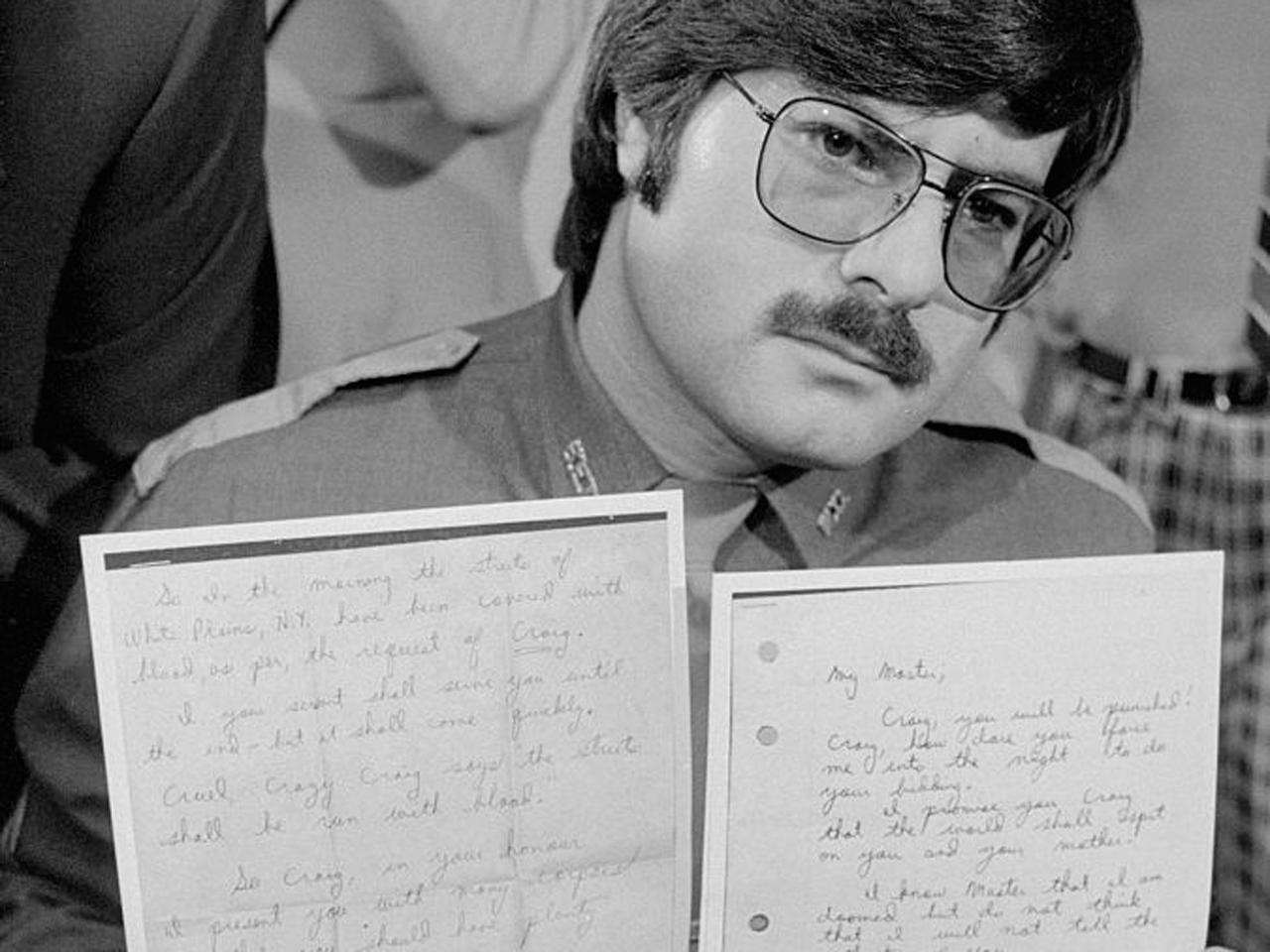 Shayna Glassman knows her family does not want her to write and visit with David Berkowitz, the infamous "Son of Sam" serial killer.

And she certainly knows how her deceased father would feel. "A relative told me, 'Your dad would be so mad at you,'" she says.

But more than anything, she is painfully aware that she's Berkowitz' "type."

"I would have been his prime target," she told CBS News. "I'm a young, attractive long haired female and I'm the daughter of the person he thought was the devil. There's gotta be some deep psychological thing happening between us."

Still, none of that stops Shayna from writing and visiting Berkowitz, now 64 years old, and an inmate at a maximum security prison in upstate New York. He's been incarcerated the past 40 years for shooting and killing six New Yorkers and wounding seven others in a murderous spree that's terrorized the city in 1976 and 1977.

"There was something deeper I needed to get," she says. "It's my way of being with my father. The one thing he left me was this story."

In 1977, Shayna's father, Craig Glassman, lived in apartment 6E at 35 Pine Street in Yonkers. His direct upstairs neighbor was Berkowitz, then a young postal worker.

Craig was a nursing student and a volunteer deputy sheriff with the Westchester County Sheriff's Office. He often wore his police uniform which is why Glassman believed Berkowitz focused on him and came to hate him.

Glassman's full story was told in a 1990 now-out-of-print book titled "Off The Wall." Part of the reason for the title are the writings police found on Berkowitz' apartment walls, some of them referencing "Craig." The "Son of Sam" also mentioned "Craig" in a letter to police when he wrote: "Because Craig is Craig so must the streets be filled with Craig (death)."

It was back in the summer of '77 -- known locally as the Summer of Sam -- Craig Glassman began to get threatening letters. They were written in script and did not appear similar to the printed letters Berkowitz sent to the police and New York Daily News columnist Jimmy Breslin.

"One of them had a drawing of a volcano," Shayna says. All of the letters were taken by New York City Police after Berkowitz was arrested.

At the time, Craig Glassman did not know who was sending the letters but he suspected Berkowitz because he often heard his upstairs neighbor pacing and one time received an angry phone call to shut off his television.

The most serious incident occurred Aug. 6, 1977, when someone left a bucket filled with gunpowder and .22 caliber bullets outside Glassman's door and set it on fire. "Dad heard the flames and thought the building was on fire," Shayna said. "He called out to neighbors who called the fire department."

The bullets never exploded but Glassman filed a harassment complaint against Berkowitz and Shayna says he told buddies on the force that he thought his crazy upstairs neighbor could be the "Son of Sam." Of course, a lot of people that year felt someone they knew might be the killer; police were inundated with tips and leads.

Days later, NYPD detectives appeared at 35 Pine Street and asked a shocked Glassman if he was David Berkowitz. It was the pre-internet, pre-Facebook era. Police had gotten Berkowitz' name and address from a parking ticket at the scene of the last shooting, but had no idea what he looked like.

"Dad said 'I can show you who he is,'" Shayna says. "He was sitting with them waiting for Berkowitz to come out and when he did, my father pulled his gun out and said, 'Freeze -- put your hands up.' He rode with them in car with Berkowitz and he said, 'You're Craig Glassman.'"

While Glassman was promoting his book in 1990, he died and left behind a suitcase with the information he'd collected on "Son of Sam." Shayna, now 30 years old, was then only 4, but she says she always took a keen interest in the killer.

"It's my way of being with my father," she told CBS News. "The one thing he left me was this story."

In December of last year, Shayna began writing him and eventually showed up to visit him unannounced. She was allowed in and, when he walked to a seat two feet away from her, not separated by glass, she introduced herself. "He said 'Shayna so good to see you,'" she says. "'So sorry to hear about your dad.'"

They spoke for more than two hours, she says, and, since then, she's visited him three more times. She even bought a manual typewriter to write letters to him "because I wanted to get into his mind."

Asked if there was anything romantic between them, Shayna said, "I'm not sure what word to use to describe our relationship. There's no romance, but it's romantic because I was doing book reports about him since eighth grade. He was always part of my consciousness."

She said she's been through some hard times and depression and has a feel for what Berkowitz may have gone through when he was only 24 years old.

Berkowitz, she said, seems to be doing just fine in his 40th year in captivity: "He's still a human and he's happy. He has a great sense of humor. Yes, he killed people, that's not something to be taken lightly, but in the deepest depths there's always a light that can be presented."

Four decades after the "Son of Sam" serial killer was arrested, David Berkowitz —in his first major TV interview in a decade -- is speaking out. Watch a CBS News special: "Son of Sam │The Killer Speaks"  Friday at 10/9c on CBS