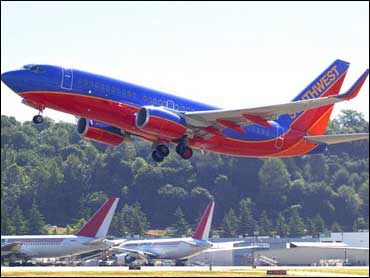 Something unusual is going on at Southwest Airlines. Everyone is happy. They all kiss and hug, even President Colleen Barrett and CEO Gary Kelly.

Average Southwest employees like the big bosses. They want to get their picture taken with Kelly. They admire him.

"I think some CEOs have to travel with bodyguards," he told Sunday Morning correspondent Martha Teichner. "So you think about that contrast, it's just something you can't take for granted."

Kelly says the difference between his company and others is simple: "People working together, people lovin' each other, people respecting each other."

Southwest Airlines has been profitable every year since 1973. No other U.S. airline can say that. It's never had a layoff. It's never cut salaries. In fact, it's one of the best-paid, most highly-unionized airlines in the industry. What makes it so successful? A smart business plan, of course, but there is something else that Southwest deems crucial:

"You put your employees first and if you take care of them, then they will take good care of you," Herb Kelleher, the airline's chairman, said. "Then your customers will come back, and your shareholders will like that, so it's really a unity."

Kelleher is legendary in the airline industry for doing things differently than the competition. Before he found himself Southwest's pitchman, Kelleher was a lawyer retained by the airline to get it off the ground - a fight that took him all the way to the U.S. Supreme Court. It seemed the last thing Southwest's competitors wanted to see was a low-cost upstart doing nothing but flying around Texas in and out of Dallas Love Field.

In 1971, "the love airline" took off. At first, Southwest was known for sexy flight attendants in hot pants, which got it the attention it needed.

"You can have a low-cost carrier and people still don't fly it because they don't know about it," Kelleher said. "And so, the schtick kind of fit in with getting known."

By 1978, Kelleher was running the place. His way of doing that was to bring his affectionate, sometimes outrageous sense of fun to management.

"I enjoy, not the theatricality of it, but the opportunity it gives me to be with our people," he said.

"Malice in Dallas" in 1992 had to have been his goofiest stunt: Instead of going to court over who had the rights to the advertising slogan "Just plane smart" - Southwest or a South Carolina aviation sales company - Kelleher agreed to settle the matter with a charity arm wrestling match.

So on any given day, during the final approach into Dallas from Houston, you might hear flight attendant, Cassie Plourd, singing you down. Plourd has been with Southwest 18 years, and so has Frannie Oberman, who says the best joke she tells to passengers is that she's addicted to pressurization.

Today, Southwest Airlines has nearly 34,000 employees. It flies to 64 different cities, has more than 500 planes and is the nation's sixth largest airline. But what makes Southwest Southwest is the fact that it turns flights around fast. This came about by accident because in the beginning, when it had only four airplanes, it had to sell one of them just to stay in business.

"And they went out to the ground ops folks and said, 'Guess what? We're gonna maintain the same schedule that we had with four aircraft now with three aircraft,'" said Kevin Freiberg, who co-wrote a book on Southwest with his wife, Jackie. "And of course, everybody said, 'How are you gonna do that?' He said, 'Well, you're gonna have to turn an airplane in 10 minutes' and of course the average turn-around time at that point was more like 45 minutes or an hour."

Here is where the relationship the airline has with its employees comes in. It is what is known as the Southwest culture.

"In the majority of businesses that are truly successful today, they've got a really definitive cause that everybody rallies around and believes in and serves toward, and works hard for. I think that's critical and Southwest got that 34 years ago," Jackie Freiberg said.

Turnarounds now average 23 minutes, but that's still better than half the time it takes other airlines. Customers, as passengers are called, are herded onto planes in three big groups. They don't have assigned seats, but most of the time, they don't seem to mind.

And when he asked his pilots' union to agree to a five-year pay freeze, Kelleher took one, too. He figures it cost him $75 million to $100 million in compensation, but it bought him trust.

"To me, seventy, hundred million - what difference does it make?" Kelleher said. "There's nothing particular I'd like to do that I can't do."

If you walk down any hall in Southwest's Dallas headquarters, there are thousands of pictures - glimpses of what love looks like at the love airline after all these years.

Southwest's culture bears the likeness of Kelleher and Colleen Barrett, who are in the process of retiring. Employees and analysts alike agree that the future of the airline depends on preserving it when Kelleher and Barrett are gone.

"When I first came here I thought, where's the Kool Aid?" Oberman said. "And it was sort of, 'This can't be true.'"

There are some important expectations for every Southwest employee.