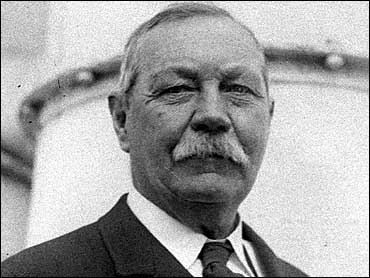 Elementary, my dear reader! It was "Sherlock Holmes: The Final Adventure," by Steven Dietz.

That wasn't the only Edgar award winner with Sir Arthur Conan Doyle's fictional detective in the title. E.J. Wagner's nonfiction book about the history of forensic science, "The Science of Sherlock Holmes: From Baskerville Hall to the Valley of Fear," won for best critical/biographical book.

Jason Goodwin's "The Janissary Tree" was named best novel. And the winner for best first novel by an American author also was revealed. Whowunit? Alex Berenson, for "The Faithful Spy."

Mystery Writers of America presented the Edgars, honoring the best in mystery fiction, nonfiction, television and film, at a banquet on Thursday.

The other winners were:

Mystery Writers of America, a New York-based organization for mystery and crime writers, fans and professionals related to the genre, has given the Edgars annually since 1946. Previous winners have included Agatha Christie, Raymond Chandler, Tony Hillerman and Elmore Leonard.

Poe, considered the patron saint of MWA, was a writer of poems, short stories and detective fiction known for his macabre tales.