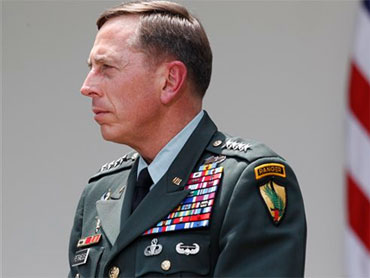 The loss of the top commander couldn't have come at a worse time for this war or for U.S. Troops. On the ground in Afghanistan, the fight is deadlier than ever, but for the men fighting this war, Gen. Stanley McChrystal's chosen replacement is the best possible choice, reports CBS News chief foreign correspondent Lara Logan.

"I think the guys are pretty confident that, General Petraeus is an extremely talented individual," said U.S. Captain Karvin Krupski.

"His way of business is he comes in, observe, evaluate and then make changes as needed," said U.S. First Sgt. Todd Sullivan. "But I think he also has shown that he has a mind that if it's not broke don't try and fix it."

The pressure will be on Gen. David Petraeus to decide exactly what does need to be fixed - and until then, the mission faces some uncertainty.

"Any new commander, General Petraeus included, will go in, assess his command, and what it is going to take to achieve the mission, and certainly has the flexibility to make changes that he thinks are necessary," said Adm. Mike Mullen, the chairman of the Joint Chiefs of Staff.

One of the issues now in the spotlight is McChrystal's focus on protecting the Afghan people, and the tactical limitations he put in place to reduce civilian casualties - an issue Petraeus will now have to confront.

Hotsheet: In Afghanistan, a New General but an Old Strategy
Afghan Questions Arise as Petraeus Takes Over
McChrystal's Complaints: Indiscreet, But Not Unique
Gen. Stanley McChrystal on 60 Minutes

A significant advantage Petraeus brings to the Afghan fight is his political skill and influence in Washington at a time when Washington politics is taking its toll on the troops.

"The biggest worry the troops have is that all this Washington talk will take away from their fight, they're worried about the popularity of the war," said CBS Radio's Tom Popyk from Afghanistan. "They're worried that the American public is going to lose faith in their fight."

The President's appointment of Petraeus was designed to show the troops - and Afghan President Hamid Karzai - that he has not lost faith in the fight.

"The fact that General Stanley McChrystal had to go was unavoidable, if that was unavoidable, the best possible replacement for him in Afghanistan was General David Petraeus," said Waheed Omar, a spokesman for Karzai.

In an effort to calm the chaos of recent days, the official line coming from Afghanistan is that the mission will not falter and remains on course. But the reality is that many of the senior leadership were brought in by McChrystal and they're wondering if they will keep their jobs.