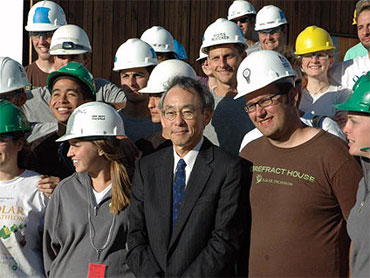 This story was written by CNET's Martin LaMonica

After nearly two years of preparation, teams of architecture and engineering students will soon open the doors on a cluster of 20 solar-powered homes on the National Mall.

The teams, from colleges in the U.S., Canada, Puerto Rico, and Europe, are competitors in the Solar Decathlon, a Department of Energy-sponsored contest designed to showcase the potential of solar energy in buildings. Energy Secretary Steven Chu, who took a walk through Team California's house on Wednesday afternoon, is scheduled to speak at the opening ceremony Thursday afternoon. The homes will be open to the public starting on Friday.

On Wednesday, however, students were busy putting the final touches on their 800-square-foot buildings and connecting their solar electric panels to a "microgrid" set up for the event, which feeds excess electricity to the local power grid. After constructing their buildings at home, student teams transport and then reassemble their buildings on the National Mall where they operate on solar power only for 10 days.

Teams are judged by architects and designers in 10 categories, including lighting design, the market viability of their projects, and architectural design. But the route student and faculty teams have taken to self-sustaining buildings is widely different. Some buildings focus on practicality by using only off-the-shelf materials while others have deliberately pushed the envelope on the technology.

At the high end of the high-tech spectrum are the teams from Ontario/B.C., Spain, and Germany, which are using building-integrated photovoltaics, or solar cells attached to the siding of their houses. The clapboards made by the German team, which won the competition in 2007, also use super-insulating material on the indoor-facing side, which students say is 10 times more insulating than traditional insulation.

At the same time, there is clear movement among some schools to show how green building technology can be accessible. While many of the homes here cost over $500,000 to build, Rice University says that its prototype Zerow House costs $140,000 to build. With smaller panels, it could be made for $80,000. Like Team Boston, the Rice team has found a buyer for their house after the completion.

From LEDs to barn siding

Electricity-generating clapboards is not the only building technology on display. Most teams are using energy-efficient appliances, LED lighting, and energy monitoring and control systems, such as touch screens which allow people to see energy consumption and control lighting and appliances.

Team California, with students from Santa Clara University and the California College of the Arts, built a building-automation system that allows the house resident to program lighting, windows and shades, and the heating and cooling system. People can program settings from a touch-screen display in the home or from a smartphone, according to students.

A number of teams are using heat pumps, considered an efficient way to heat and cool buildings. The Rice Zerow house configured its heat pump so that there are two separate heating/cooling units, which avoids energy loss in ducts.

Another technology used more this year than two years ago is microinverters, devices that convert the direct current from solar panels to household alternating current. These microinverters, which replace larger dedicated machines, are more expensive but can increase electricity output by 10 percent, according to Martin Zeumer from Team Germany.

On the design side, most of the homes seek to use daylight strategically with large south-facing windows and blinds. Daylight cuts down on the need for artificial lighting and can help increase the amount of heat available from the sun.

Another theme on the architecture side is a conscious choice of materials, such as insulation made from recycled blue jeans or locally sourced material. The University of Illinois team's house, for example, is covered in wood planks reclaimed from a barn on one of the team member's family farm.

The specific designs from the Solar Decathlon are best suited for new construction. But opening up the homes to the public is meant to give people ideas on how to incorporate solar technologies and energy efficiency in the homes.

"In my mind, this is an open-source house," said Roque Sanchez, an engineering student from Rice University. "We're really working for the public so they can see what works. I hope somebody can copy and change what we've done."