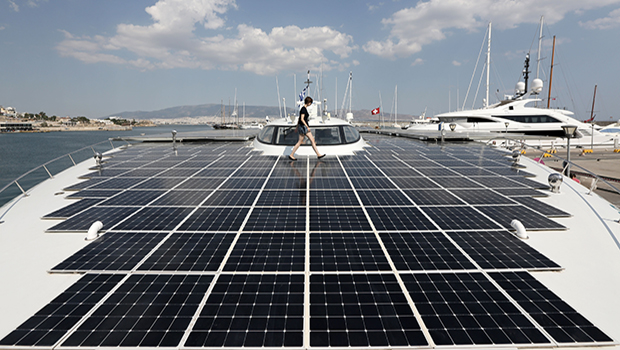 The world's largest solar-powered boat has arrived in southern Greece to participate in an ambitious underwater survey that will seek traces of what could be one of the oldest human settlements in Europe.

The Swiss-Greek project starts next week and archaeologists hope it will shed new light on how the first farming communities spread through the continent.

Working near a major prehistoric site, they will investigate a bay aptly called Kiladha - Greek for valley. The area was once dry land and archaeologists operating off the MS Turanor PlanetSolar hope it may contain sunken remains of buildings from Neolithic times, when farming started, about 9,000 years ago.

Mission leader Julien Beck, from the University of Geneva, said Tuesday the team picked Kiladha Bay because it laps on Greece's oldest and most important Neolithic site, the Franchthi Cave.

The cave was inhabited on and off for about 35,000 years - from 40,000 years ago when the first anatomically modern humans appeared, until mankind started using metal tools.

"There are all these amazing finds from Franchthi - pottery, ornaments - but nothing resembling a village," Beck told the Associated Press. "So there has to be another place where they were producing these finds."

Franchthi has provided indications of seafaring in the Aegean Sea some 15,000 years ago. Beck argues its residents could have come by sea from the East, providing an alternative to current theory that Europe's first farmers arrived through northeastern Greece and Bulgaria.

"We have neglected the importance of prehistoric seafaring," he said.

The 35-meter (115-foot) PlanetSolar, which has sailed round the world relying on solar energy alone, and a vessel from the Hellenic Centre for Marine Research will scan and map the seabed. Divers will then excavate potential targets.