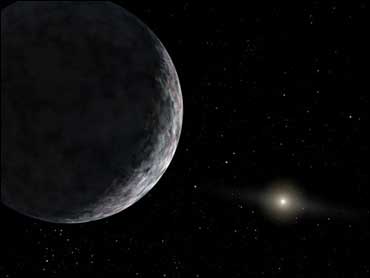 Scientists say they have confirmed that a so-called 10th planet discovered last year is bigger than Pluto, but that likely won't quell the debate over what makes a planet.

The astronomers who spotted the icy, rocky body — informally called 2003 UB313 — had reported only a rough estimate of its size based on its brightness.

But another group of researchers has come up with what is believed to be the first calculation of UB313's diameter.

By measuring how much heat it radiates, German scientists led by Frank Bertoldi of the University of Bonn estimated that UB313 was about 1,864 miles across. That makes it larger than Pluto, which has a diameter of about 1,429 miles.

"It is now increasingly hard to justify calling Pluto a planet if UB313 is not also given this status," Bertoldi said in a statement.

Details were published in Thursday's issue of the journal Nature.

According to Nature, the planet was difficult to measure because it is so far away from the sun.

"UB313's elongated orbit takes it almost twice as far away from the Sun as Pluto ever gets, making it very difficult to measure its diameter precisely," the article reads.

Some astronomers have debated over what is a planet and whether Pluto should keep its status. The difficulty is there is no official definition and some argue that setting standards like size limits opens the door too wide.

Michael Brown, the astronomer at the California Institute of Technology who discovered UB313 and announced it last July, said the Germans' measurement seemed plausible. He said his team is using the Hubble Space Telescope to directly figure out its size.

Brown previously reported that UB313 was thought to be larger than Pluto and estimated that it was most likely between 1,398 miles and 2,175 miles in diameter.

If it is determined to be the 10th planet, it would be the farthest-known body in the solar system.