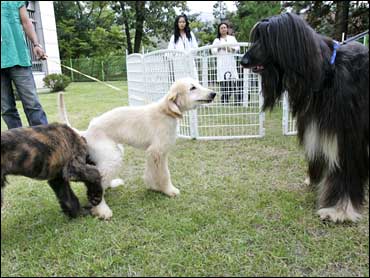 Snuppy - the world's first cloned dog - is a father.

A team of Seoul National University scientists said Tuesday that 10 puppies were born in May using sperm from Snuppy artificially inseminated into two cloned female dogs.

"Scientific doubt over whether breeding by cloned dogs is possible has been resolved," Lee Byeong-chun, head of the research team, told The Associated Press.

Lee said his team has cloned about 30 dogs and five wolves since it succeeded in cloning Snuppy in April 2005.

The Seoul National University team suffered a blow to its reputation after internationally acclaimed breakthroughs in stem cell research by its former head, Hwang Woo-suk, were found to have been faked.

Lee said the university's forensic medicine team has identified Snuppy's pups as his offspring through DNA tests. He also said he presented the births to an international conference in Greece late last month.

A cloning expert in Britain said the development wasn't significant, since other cloned animals - including the world's first, Dolly the sheep - have successfully produced offspring.

"We haven't really seen problems with the offspring of clones. Dolly had little lambs and they were fine and very cute," Robin Lovell-Badge, head of developmental genetics at Britain's National Institute for Medical Research, said in London.

Lovell-Badge said Snuppy's puppies would certainly be the first from a cloned dog. She noted that breeding among cloned animals has not proved problematic.

"There is some evidence that clones can have defects because of a failure to correctly program some imprinted genes, but most evidence is that once you breed from a cloned animal, everything is back to normal," Lovell-Badge said.

Snuppy, a black Afghan hound, has been living at a university facility with three other female dogs - tan Afghan hounds cloned by the team in 2006.

One of the 10 puppies - four from Bona and six from Hope - died of a digestive problem about a month after birth, but the rest are all healthy, the team said.

On Tuesday, the university showed off four of the puppies, which scampered, wagged their tails and frolicked with their parents.

"Bona and Hope have became very modest since giving birth to their puppies," said Oh Hyun-ju, a researcher who has taken part in the team's dog cloning work since Snuppy's birth.

"They also showed dogs' typical parental affection - they barked and were so restless when we took their puppies to measure weights and conduct other tests," she said.

Oh said Snuppy has shown some slight changes in behavior since becoming a father.

"Snuppy didn't like baby dogs before, and whenever he was approached by small dogs, he walked away," she said.

"But now he doesn't budge when his puppies are near him," she said. "So we think Snuppy has truly became a father."

World's oldest-known spider dead - but not from old age