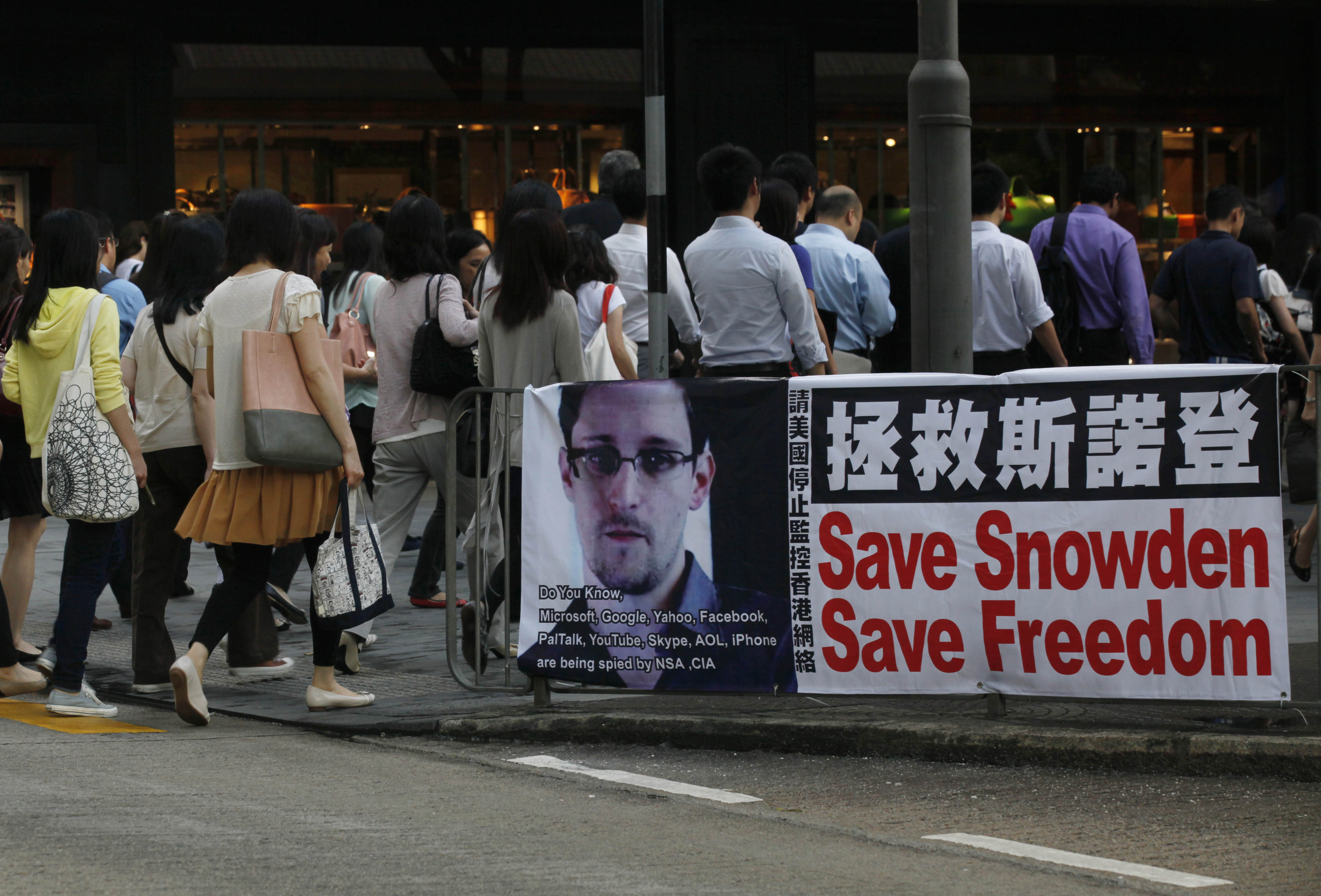 Edward Snowden, the former government contractor who leaked information about the National Security Agency's sweeping surveillance programs, said Monday that the U.S. government "immediately and predictably" destroyed any chance that he'd receive a fair trial by declaring him guilty of treason.

"The US Government, just as they did with other whistleblowers, immediately and predictably destroyed any possibility of a fair trial at home, openly declaring me guilty of treason and that the disclosure of secret, criminal, and even unconstitutional acts is an unforgivable crime," Snowden said in an online Q&A hosted by the Guardian, the British publication that published the information that Snowden leaked.

"That's not justice, and it would be foolish to volunteer yourself to it if you can do more good outside of prison than in it," he said in response to a question as to why he fled to Hong Kong after leaking information.

Snowden has yet to be charged with anything for leaking information revealing the NSA's bulk collection of U.S. phone records from Verizon, as well as the NSA's surveillance of internet content from foreigners outside of the U.S. (which may easily lead to the inadvertent collection of U.S. information). That, however, hasn't stopped several lawmakers from weighing in on the nature of Snowden's actions, with one senator accusing him of treason and both House Speaker John Boehner, R-Ohio, and former Vice President Dick Cheney calling him a traitor.

Snowden said Monday, "Being called a traitor by Dick Cheney is the highest honor you can give an American," slamming Cheney for the Bush administration's warrantless wiretapping and for "deceitfully engineering" the Iraq war.

Snowden said he decided to leak the information after witnessing "a continuing litany of lies from senior officials to Congress - and therefore the American people." He specifically cited Director of National Intelligence James Clapper's March congressional testimony, in which Clapper said unequivocally that the NSA does not collect data on American communications. The White House has defended Clapper's testimony, even though it's proven to be false and Clapper himself said he gave "the most truthful, or least untruthful manner" answer possible.

"Seeing someone in the position of James Clapper - the Director of National Intelligence - baldly lying to the public without repercussion is the evidence of a subverted democracy," Snowden said. "The consent of the governed is not consent if it is not informed."

Multiple government officials on Sunday said that Snowden has been exaggerating the level of access he had to information collected by the government. Retired Gen. Michael Hayden said on NBC's Meet the Press, "He could not possibly have done the things he claimed he was able to do in terms of tapping communications."

Snowden, however, said in Monday's Q&A that he stands by his assertion that he could have wiretapped anyone. Snowden said that the restrictions against direct access to culled data "are policy based, not technically based, and can change at any time."

"US Persons do enjoy limited policy protections (and again, it's important to understand that policy protection is no protection - policy is a one-way ratchet that only loosens) and one very weak technical protection - a near-the-front-end filter at our ingestion points," he said. "The filter is constantly out of date, is set at what is euphemistically referred to as the 'widest allowable aperture,' and can be stripped out at any time. Even with the filter, US comms get ingested, and even more so as soon as they leave the border."

Snowden also charged that the U.S. is hanging onto the content -- not just the metadata -- of U.S. communications.

"If I target for example an email address, for example under FAA 702, and that email address sent something to you, Joe America, the analyst gets it," he said. "All of it. IPs, raw data, content, headers, attachments, everything. And it gets saved for a very long time - and can be extended further with waivers rather than warrants."

Snowden answered a number of other questions about his decision to flee to Hong Kong and addressed speculation that he could be a spy for China. He called that speculation a "predictable smear."

"Ask yourself: if I were a Chinese spy, why wouldn't I have flown directly into Beijing?" he said. "I could be living in a palace petting a phoenix by now."

Snowden also cleared up why he went to Hong Kong rather than his preferred destination of Iceland.

"Leaving the US was an incredible risk, as NSA employees must declare their foreign travel 30 days in advance and are monitored," he explained. "There was a distinct possibility I would be interdicted en route, so I had to travel with no advance booking to a country with the cultural and legal framework to allow me to work without being immediately detained. Hong Kong provided that. Iceland could be pushed harder, quicker, before the public could have a chance to make their feelings known, and I would not put that past the current US administration."

Snowden responded to another question about his fate -- and the subsequent fate of the NSA material he obtained -- by remarking, "All I can say right now is the US Government is not going to be able to cover this up by jailing or murdering me. Truth is coming, and it cannot be stopped."