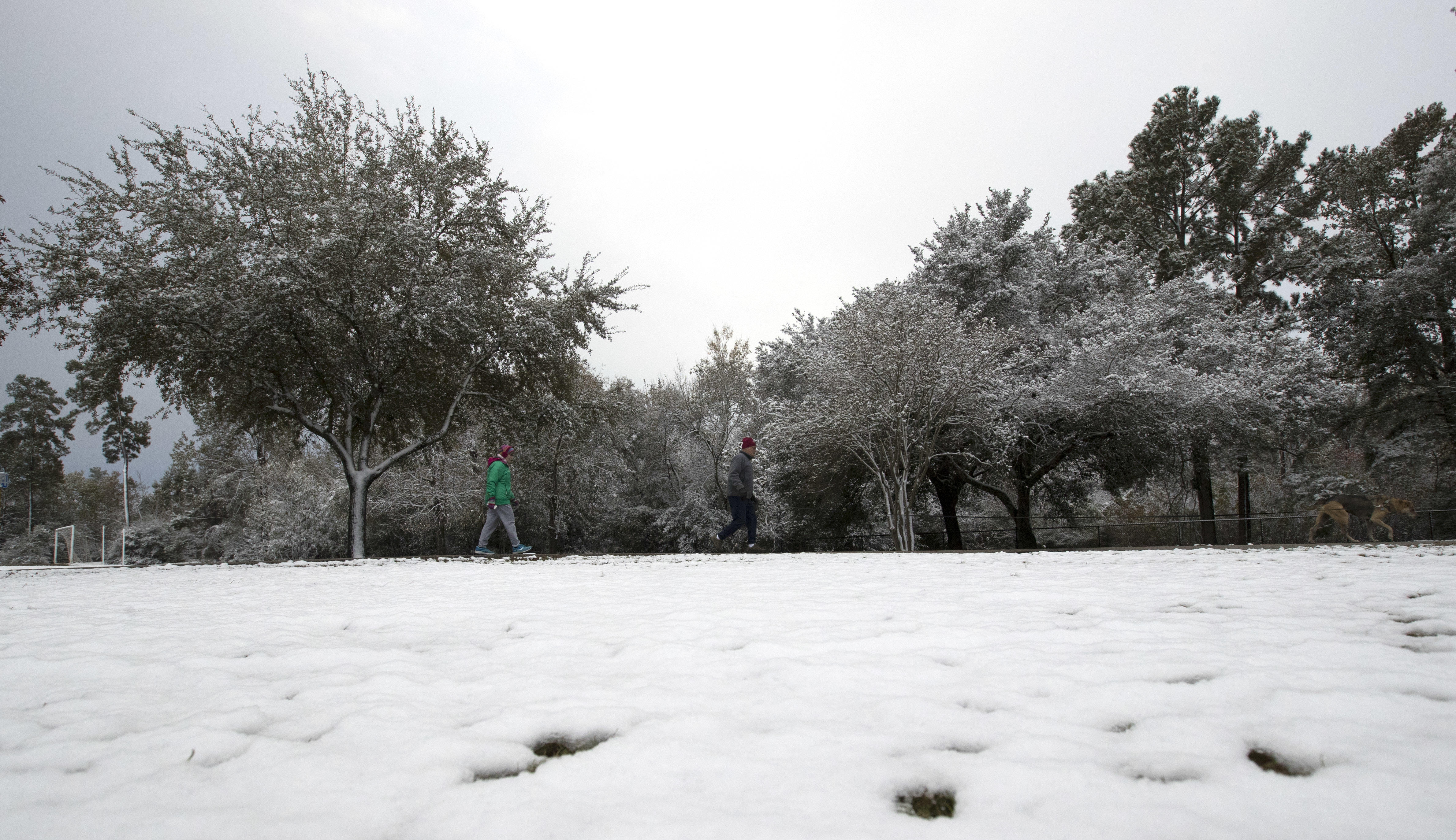 ATLANTA -- Snow fell across parts of the Deep South early Friday, causing Southerners to panic and rush toward the grocery store even as forecasters predicted any accumulations would melt quickly.

The forecast called for a mix of rain and snow across several Deep South states. Parts of Alabama, Georgia, Louisiana and Mississippi reported snow flurries before dawn. Students got an unexpected holiday as dozens of school systems closed ahead of the wintry weather.

"It's the first snow of the season and any time you even mention snow in the South, you're going to get people a little panicky," said David Nadler, a meteorologist at the National Weather Service's office south of Atlanta.

In Alabama, Glenn Thompson said he didn't have any trouble getting to work early Friday at a Texaco station in the northeastern town of Heflin despite snow that was still falling.

"We probably got about an inch. As long as the temperature doesn't drop we'll be fine," said Thompson, who works in the shop. "The roads are wet but they're clear. We've still got people coming through (but) they closed schools for the day in Cleburne County."

Forecasters said ground temperatures were warm enough that the storm should bring only a fleeting brush with winter. Still, the threat of even a half inch of snow was cause for alarm in a region that doesn't see regular snowfall.

The frigid temperatures behind a cold front that combined with moisture off the Gulf of Mexico to bring the weather to parts of the South also yielded a rare snowfall in South Texas. It knocked out power to thousands, caused numerous accidents along slick roadways and also prompted schools to close.

CBS Dallas-Fort Worth reports Friday marked the first freeze for north Texas in nearly a year.

Snow and sleet fell Thursday in Laredo and other communities on the border with Mexico.

In Atlanta, the morning commuter seemed lighter than usual with many people apparently opting to say off the roads. Cars moved along the interstate at a steady clip and commuter buses seemed less crowded than usual. The streets were wet, but temperatures remained in the 40s well above freezing.

Georgia road crews took no chances ahead of Friday's morning rush hour and pre-treated bridges and overpasses late Thursday with a briny water-and-salt mix against any snow or ice.

The National Weather Service said a half inch to an inch of snow is forecast across many areas of the South by Friday night. Winter weather advisories have been posted for parts of Louisiana, Mississippi, Alabama, Georgia and the Carolinas. The advisories were issued for cities including Baton Rouge, Louisiana; Hattiesburg, Mississippi; and Birmingham, Alabama.

Weather service meteorologist Kent McMullen said the first reports of snow came in the north Georgia mountains. Snow also was reported falling early Friday in the suburbs north of Atlanta, with drizzle reported in other parts of the state.

The forecast called for rain and snow most of the day, changing to snow Friday night.

"There's a lot of uncertainty right now" about just where the snow could fall and in what amounts, Nadler cautioned.

Forecasters said the biggest chance for snow was along the Interstate 85 corridor from Alabama crossing Georgia through Atlanta and into South Carolina once the temperature begins falling. Temperatures by sundown Thursday had already begun to dip in Atlanta, where tailgating football fans shivered and huddled around small barbeque grills atop downtown parking decks before a night game between the NFL's Atlanta Falcons and the visiting New Orleans Saints.

For Friday, Nadler said, temperatures in the Atlanta area were expected to range from 35-40 degrees Friday morning with little fluctuation the rest of the day.

The weather service warned that black ice was possible on roads Saturday morning with low temperatures of 20 degrees to the lower 30s.

Highs are expected to reach the 40s by Saturday afternoon with mostly sunny skies.