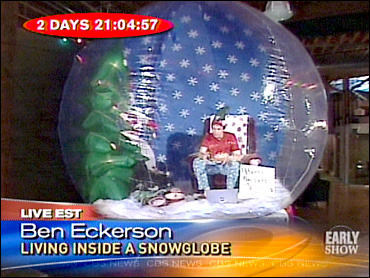 Most of us spend the holiday season out-and-about, dealing with the hustle-and-bustle of shopping, shoveling, and soirees.

Not Ben Eckerson. The 24-year-old production coordinator at McKinney advertising agency in Durham, N.C. has been in an inflatable snow globe much of this week -- it was almost three full days Friday morning, as he appeared on The Early Show.

It's all being shown live, 24/7, via Web cam at http://snowglobeboy.mckinney.com -- so anyone can take a look.

The site says he's seeking a world record for time spent in such a spot -- and he wants to spread holiday cheer.

Eckerson has been spending 51 minutes a day outside the globe to tend to personal needs.

He told co-anchor Harry Smith his agency wanted to send a "green" holiday card this year, and came up with the snow globe idea -- sending out digital cards via the Web site.

Eckerson say he loves Christmas, so he was a perfect choice for the project.
He says he told his bosses, "I'm totally game" to be the snow globe boy.

He plans to leave the globe later Friday to attend his company holiday party. After all, he says, he RSVPed!

Eckerson says he's gotten so many e-mails since entering the globe, he can't even respond. "It's bananas," he said. "It really is!"