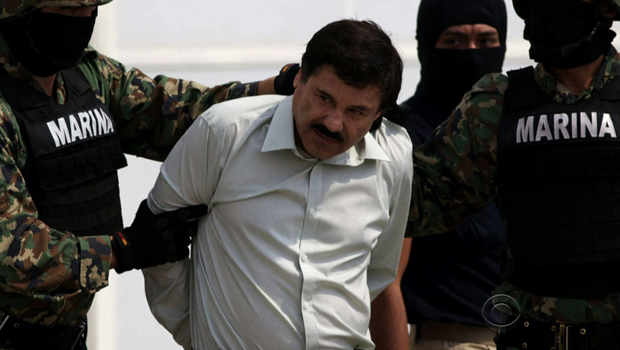 Joaquin "El Chapo" Guzman, the reputed head of the ruthless Sinaloa cartel, had eluded capture for 13 years after escaping from prison in a laundry truck in 2001.

But, his fugitive run ended Saturday in a modest hotel on Mexico's Pacific coast.

U.S. law enforcement played a crucial role developing fresh intelligence in the past week, tightening the dragnet around Guzman.

Sources say the big break came on Sunday, Feb. 16. A task force from the U.S. Drug Enforcement Administration, Immigration and Customs Enforcement and the U.S. Marshals tracked a cell phone linked to one of Guzman's top aides to a house in the city of Culiacan.

Authorities quickly nabbed one of the cartel's couriers near that location. The courier, known as "Nariz," revealed that Guzman frequently used the house and at least four others as hiding places.

Two hours later at 4 a.m. Monday, Feb. 17, Mexican marines raided the house and missed Guzman by seconds. Sources say Guzman escaped down a tunnel through a trap door under a bathtub. He fled through the city's sewers and was driven away by cartel henchmen.

Six days later, on Saturday, authorities picked up his trail in the resort city of Mazatlan.  Wiretaps and call tracers led agents to a cell phone inside a hotel. Agents knew that phone belonged to Guzman's top aide, a communications specialist who always traveled with Guzman.

At 5:30 Saturday morning, heavily armed troops broke down a fourth-floor door.  Without a shot, Guzman was captured in his bed.

Guzman had a $5 million price on his head, posted by the U.S. State Department.

He has been indicted by federal grand juries in at least seven jurisdictions, including Chicago, where he is the city's most wanted fugitive.

Chicago's gang members, estimated at 100,000, are ready foot soldiers and enforcers for Guzman's Sinaloa cartel, which supplies 70 to 90 percent of the drugs sold here, according to the Drug Enforcement Administration.

Rival cartels or gangs trying to move in on Guzman's organization have been dealt with harshly, and innocents have been caught in the crosshairs of what is a $3 billion a year business in the Chicago area alone.

Last year the Chicago Crime Commission named Guzman public enemy number one. The only other person to get that label was the mobster Al Capone.

Joseph Ways, the commission's executive director, said he believed that compared to Capone, Guzman was worse.

"The deaths, the fighting amongst the gangs can all be attributed to what he was supplying," Ways said.

"He's an international conglomerate, is one way of putting it," he said.

Guzman was once quoted in an article in The New York Times Magazine calling Chicago his home port. Its many warehouses, rail network, highways and airports provide a perfect trans-shipment hub.

While there have been concerted efforts to disrupt the flow of drugs into the Chicago area, the results have been mixed.

In 2012, 86 percent of adult males arrested here tested positive for drug use, the highest rate in the country, according to the Office of National Drug Control Policy.

Enforcement officials say Guzman's arrest may cause a temporary disruption of the drug trade but with the smuggling network in place and with successors already in line it would be naïve to think the problem has been solved.

Now the man suspected of being of the most notorious drug kingpins in the world could soon be at the center of a tug of war.

On Monday, lawyers for  Guzman began to try to prevent his extradition from Mexico to the United States, where he is wanted on a slew of drug charges.

But Mexico, where Guzman has been charged with violating Mexico's drug laws, is showing no inclination to turn him over. On Tuesday a Mexican judge is expected to start the process of bringing him to trial there.

Extradition is likely to take a long time.

A look at China's "Button Town"