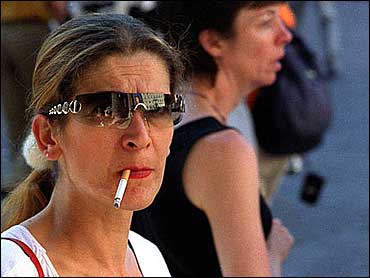 Need another reason to stop smoking? Cigarette smokers are far more likely than nonsmokers to go blind late in life, but few people are aware of the risk, new research suggests.

Smoking was associated with a two- to threefold increase in the risk of developing age-related macular degeneration (AMD) in a review of studies conducted by researchers in the U.K.

The condition is largely irreversible and difficult to treat. AMD blurs the sharp central vision, affecting visual acuity, our most detailed, vision which we use for skills like reading, driving, or activities that require fine, sharp, or straight-ahead vision.

"The studies confirmed that smokers were significantly more likely to develop AMD than nonsmokers and that heavy smokers had the highest risk," ophthalmic surgeon and study co-researcher Simon P. Kelly, MD, tells WebMD.

Patient Survey On Smoking And Health

In addition to reviewing the studies, Kelly and colleagues conducted a survey to determine if people knew that smoking was associated with blindness. Roughly 400 adult patients being treated at ophthalmology, general surgery, and orthopaedic clinics answered questions about smoking and health.

"Our hypothesis was that few patients would be aware of the risk of eye disease (associated with) smoking, but that awareness of the risks to eyesight from smoking would be a strong stimulus for smokers to quit," the researchers wrote in the latest issue of the journal Eye.

About half of the smokers interviewed said they would definitely or probably quit smoking if they developed early signs of blindness. About the same number said they would quit if they suspected heart disease or lung cancer.

"What this says to us is that this is an important public health message that hasn't gotten out," Kelly says.

With this in mind, the U.K.'s Royal National Institute for the Blind (RNIB) launched a public awareness campaign Wednesday to coincide with the publication of the studies by Kelly and colleagues.

"Smoking is the only proven cause of AMD that people can do anything about yet people are not aware of the link and most people have not even heard of the condition," says RNIB official Steve Winyard in a news release.

Kelly says smokers who long ago stopped listening to familiar public health warnings about cigarettes and lung cancer or heart disease just may consider quitting when they learn they are at increased risk of going blind.

"In advertising it is well known that you have to vary the message to keep people's attention," he says. "If you don't, they will stop listening."

But Seattle ophthalmologist Richard Bensinger, MD, says he is less optimistic that adding blindness to the long list of smoking-related health concerns will affect behavior. This is especially true, he says, for younger smokers.

"My personal feeling is that if fear of cancer doesn't discourage people from smoking then the threat of blindness probably won't either," he tells WebMD. "If you tell a 30-year-old that they may go blind at age 75 or 80 I don't think it will have much impact."

Smoking-related cancer risk declines within just a few years of quitting, but the same may or may not be true for AMD and blindness, Bensinger says.

"We just don't have the data yet to say," he says. "This has not been studied for very long, so it will take time to figure this out."