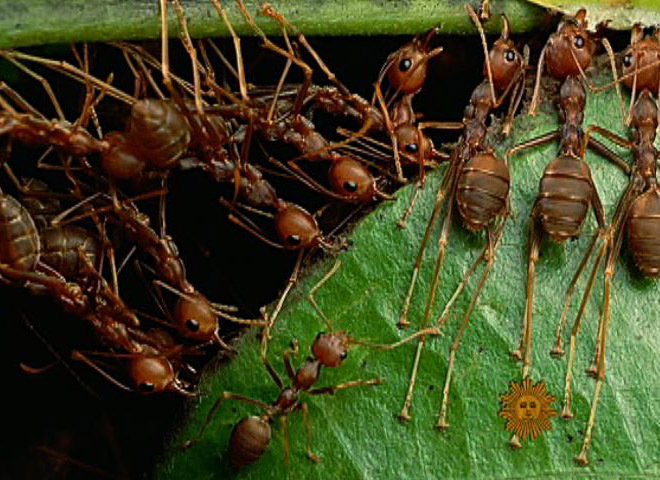 Talk about SMALL WONDERS! Ants manage their own complex societies right under our noses. And, as Faith Salie explains, even if you don't want them at your picnic, you have to admire all ants can do:

But in Belize, the ant is the king of the jungle ... constantly on the prowl, under every rock and in almost every flower.

"I learned early, like when I was in diapers, that ants are controlling the world under our feet," he said. "Down there as an infant I would watch them doing all of these things that were very human-like. Building roads, working together to collect food, all kinds of things. Ants do all kinds of things that even primates, like a chimpanzee, don't have to deal with."

Take the leaf-cutter ant. These insects live in colonies composed of millions, and feeding all those millions of mandibles requires a lot of work.

"This is a tough job, and their jaws get quite worn down by it," Moffett said. "Their jaws, however, contain a lot of zinc, so they're essentially living can openers that can grab onto the leaf from one side and tear through with that other tooth from the other side the way you use a little portable can opener."

A lot of ants carry leaves with hitchhikers on them. "This was something that early explorers even pointed out: Why are these little ants climbing on top of the leaves and getting hauled along?" Moffett said. "Well, one reason is it probably costs the colony less energy for them to stand on the leaves than to walk themselves. So this is just good economics."

"Carpooling!" Salie said. "These leafcutters are carrying their booty back to the colony. But they're not gonna eat the leaves."

"No, they don't actually eat these leaves. And you would think they would 'cause they're carrying literally pound after pound of leaf down this tree. But they actually turn them into a mulch on which they raise a fungus. They're fungus-eating ants."

They're entirely farmers. In fact, says Moffett, "they do everything you think human farmers do."

And in case you were wondering what that farm-fresh fungus looks like, we dug some up.

"This is ambrosia for the ants," said Moffett ,"and they don't need anything more."

"This is kind of their Power Bar," Salie said.

"It is, it's very nutritious. You wanna try some?"

The verdict? "It needs a little chocolate."

"You get a variety of different sizes of workers with different shapes. And they're all built specifically to do certain tasks or jobs. So they are born with this identity," said Moffett."

There are actually "suicide bomber" ants. "The ant simply walks up to the enemy and explodes - spraying this toxic yellow glue over itself and everything around it," Moffett said. "That's right out of sci-fi. It doesn't even need any TNT. It just has it built into its body."

With behavior this "human-like," they must be pretty smart, right?

No, according to Deborah Gordon, professor of biology at Stanford: "Ants are not smart. In fact, if you watch an ant for any length of time, you're gonna end up wanting to help it, because ants are really very inept.

"But colonies are smart. So what's amazing about ants is that in the aggregate, all of these inept creatures accomplish amazing feats as colonies," she said.

And according to Gordon, they do it all without a boss.

"The queen does not give rules," explained Moffett. "She does not make proclamations. She just sits there and lays eggs. Being the queen would be the most boring job in the ant society."

Okay, so the queen isn't in charge. But ladies do rule the colony. Virtually any ant you ever see is a female - males just mate once and die.

So all these females survive and thrive together, all without a leader - which can be hard for us humans to understand.

"We put a lot of effort into thinking through how to organize some of the things that we try to do as groups," said Gordon. "Ants don't put in any effort at all. They're pretty messy about it, and it works really well."

So, if no one is in charge, how DO ants make decisions?

"Ants largely communicate by scent over very short distance," Moffett said. "It makes sense to actually put out little puffs of odor. If they're trying to do something in a longer range, like there's a battlefield, at some distance, they will lay down that little odor trail."

Ants provided some guidance for Doug Lawson, a systems analyst at Southwest Airlines.

"Because we know that ants have accomplished these amazing things right based on very simple rules, we know that if we want to see something complicated happen - like completely filling the interior of an aircraft with people - we know that simple ant-type behavior is adequate to represent what's occurring," Lawson said.

"So Southwest Airlines said, 'Help us figure out the most efficient way to help us get our passengers on a plane,' and you said, 'I know - I'll use ants'?" asked Salie.

"Yeah, right. Because they do complicated things with very simple rules," Lawson said.

Lawson used mathematically-modeled ants to determine the most efficient way of boarding a plane, which turns out to be open seating.

"So Southwest's way of boarding without seat numbers is actually more efficient than when I board another airline and know exactly what my seat is?" asked Salie.

"Right. When we simulated what the different airlines are doing, it turns out that with assigned seats, there's a one-third chance that you're going to ask two people to get up, whereas open seating - since the middle seat is the undesirable one - generally that's the one that's last to be filled, [so] only one person is likely to get up, the person sitting near the aisle," said Lawson. "I may have to ask somebody to get up and get out of the way to let me get to a seat, and that's about it. So it's really simple.

"So the ants are sort of an analogy - simple rules produce complicated transactions and events and major structures. and we can do the same thing in a little simulated world and represent very complicated processes," said Lawson.

"Now, did these ants have carry-on baggage? Were these ants cranky?" asked Salie.

For human behavior, it turns out ants have a lot to teach us about activities that don't require a lot of brain power, like what happens at the check-in counter.

"Basically if you have enough employees or machines - or ants in a colony - they can all have very specific tasks," said Lawson. "And that's how ant society is. And that's how they evolved jobs over millions of years. It's come to be that we need a nursing ant; we need a soldier ant."

Or a Southwest employee directing passengers to the next open check-in machine.

Lawson believes airline operations are just the beginning of what mathematically modeled ants have to offer ...

"Anything that provides a service can be converted into an ant, and so then they'll adapt, too," Lawson said. "So a service device could be an ant also, and it could change its behavior - what service is it offering? Where should it be? It could wander around the lobby trying to figure out where it ought to stand, and what kind of service it should offer.

"So when you think about it that way, anything - an ATM, a parking space, an aircraft - convert them into an ant and let them behave, too, under the influence of the customer who wants them, and they'll change their behavior too."

"Arguably, humans are too smart for the functioning of the whole society - it pays to be individually stupid," Moffett laughed. "This is the wisdom of the crowds idea brought to ants. Basically, all those little ants with their mostly ignorant choices, out of all that emerges a smart society."