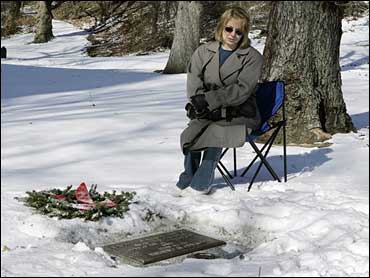 Edward "Willie" Carman wanted a ticket out of town, and the Army provided it.

Raised in the projects by a single mother in this blighted, old industrial steel town outside Pittsburgh, the 18-year-old saw the U.S. military as an opportunity.

"I'm not doing it to you, I'm doing it for me," he told his mother, Joanna Hawthorne, after coming home from high school one day and surprising her with the news.

When Carman died in Iraq three years ago at age 27, he had money saved for college, a fiancée and two kids — including a baby son he'd never met. Neighbors in Hawthorne's mobile home park collected $400 and left it in an envelope in her door.

For a year after his death, Hawthorne took a chair to the cemetery nearly every day, sat next to his grave and talked quietly. Her vigil continues even now; the visits have slowed to once a week, but the pain sticks.

Across the nation, small towns are quietly bearing a disproportionate burden of war. Nearly half of the more than 3,100 U.S. military casualties in Iraq have come from towns like McKeesport, where fewer than 25,000 people live, according to an analysis by The Associated Press. One in five hailed from hometowns of less than 5,000.

Some are old factory towns like McKeesport, once home to U.S. Steel's National Tube Works, which employed 8,000 people in its heyday. Now, residents' average income is just 60 percent of the national average, and one in eight lives below the federal poverty line.

There's a "basic unfairness" about the number of troops dying in Iraq who are from rural areas, said William O'Hare, senior visiting fellow at the University of New Hampshire's Carsey Institute, which examines rural issues.

Diminished opportunities are one factor in higher military enlistment rates in rural areas. From 1997 to 2003, 1.5 million rural workers lost their jobs due to changes in industries like manufacturing that have traditionally employed rural workers, according to the Carsey Institute.

Rural communities are "being asked to pay a bigger price for this military adventure, if I can use that word, than their urban counterparts," O'Hare said.

As a result, in more than a thousand small towns across the country — from Glendive, Mont., to Barnwell, S.C., to Caledonia, Miss., and from Hardwick, Vt., to Clinton, Ohio — friends and families have been left struggling to make sense of a loved one's death in Iraq. It's a struggle that hits with a special intensity in tight-knit, small towns.

"In a small community, even if you don't know somebody's name you at least know their face, you've seen them before, talked to them maybe," said Chuck Bevington, whose 22-year-old brother Allan, from Beaver Falls, Pa., died in Iraq, after volunteering for a second tour. "A small community feels it a lot tighter because they've had more contact with each other."

Even strangers come up and hug his mother, he said.

Military tradition and patriotism run deep in rural America. For some, the drive to serve goes well beyond economics. Sometimes, the call is something even their parents don't completely understand.

When a Marine recruiter came to Ryan Kovacicek's two-story house outside Washington, Pa., off a mountain rural road surrounded by cattle pastures, his father, a Marine veteran of Vietnam, turned to his college student son and said, "You don't really understand what you're getting into."

"Yes, I do," he stubbornly told his father before signing the papers.

Their son was a jokester, easygoing and popular. He loved golf and vacationing in Myrtle Beach, S.C. But there was a serious side too, and his parents said he believed in serving his country. As a bonus, he thought military service would help him one day get a job with the FBI or CIA.

Before leaving for Iraq, he took his girlfriend to a car dealership along I-79, pointed to a giant American flag flying overhead, and declared, "This is why I joined the Marines."

When his body was brought home, the hearse passed the same flag.

The day of Kovacicek's funeral, people lined Route 19, holding signs with his name. Little kids waved flags and men held their hands over their hearts to pay respect to the procession of more than 300 cars. His parents say they've been overwhelmed by the support of the community with tributes and phone calls from his friends and fellow Marines.

In Iraq, they later learned, he used to serenade his buddies with a song his father learned in boot camp and taught him as a boy. His voice choking, Joe Kovacicek recalled the words: "You can have your Army khaki, you can have your Navy blue, but here's another fighting man I'll introduce to you."

Among his belongings returned to the family was a tiny worn-out Bible he carried in his pocket.

His mother, Judi, said she didn't watch President Bush's recent address on the war because they try to stay out of the politics of Iraq.

"If God was going to take him at 22, if he didn't take him like he did, how was he going to do it? I feel a lot better losing him this way because there was a lot of meaning behind what he did," his father said.

Death isn't the only burden the war has visited on the nation's small towns.

Entrepreneurs in many small communities have lost their businesses after deploying in the Guard and Reserves, said Sen. Jon Tester, D-Mont. More federal dollars also are needed to ensure that returning troops have easy access to veterans health centers, he said.

"It's an issue of fairness that these folks are willing to go over and fight wars and put their lives on the line and really back this country up the way they have ... we owe it to them to live up to our obligation of benefits," Tester said.

Another fairness issue, raised by Rep. Bart Stupak, D-Mich., is the Pentagon's practice of transporting the remains of military personnel killed in Iraq only to the nearest major airport. Stupak said it "imposes a burden on the family and friends when they should instead receive our support." He has introduced legislation to require the DOD to deliver the remains to the military or civilian airport chosen by the family.

While support for the war in rural areas initially was high, there has been a sharp decline in the past three years. AP-Ipsos polls show that those in rural areas who said it was the right decision to go to war dropped from 73 percent in April 2004 to 39 percent now. In urban areas, support declined from 43 percent in 2004 to 30 percent now.

Marty Newell, chief operating officer of the Whitesburg, Ky.-based Center for Rural Strategies, said rural areas supported the war early on because so many of their young men and women were fighting it.

As the war drags on into its fourth year, Vietnam war historian Christian Appy said the burden it has placed on smaller communities — just as it did in Vietnam — can be a very "embittering experience."

"I think people in many of those towns are deeply patriotic and want to support the country, but as time goes on, it's becoming increasingly clear to those people that their country and its security is not at stake in this war and in Vietnam," Appy said.

One who's conflicted about the U.S. role in Iraq is Marilyn Adams, 37, of Wexford, Pa. Her 3-year-old son opened the door in 2005 when an officer came to tell her of the death of her husband, Pennsylvania National Guard Sgt. 1st Class Brent Adams, 40, in Iraq.

"I'm torn," she said. "Should we finish the job? And then I go to the funerals of the local guys and I'm like, this is just stupid ... I don't think we're going to finish it there. I don't think there's a finishing point. They're getting more efficient at killing us, that's a direct quote from the president."

Long before football great Joe Namath put Beaver Falls on the map, the Pennsylvania mountain town was known for its cold-drawn steel. But like much of the Steel Belt, it's had a decline in population and jobs.

Allan Bevington, who enjoyed heavy metal music and loved to fish, talked to his older brother, Chuck, about his time in the Army and eventually decided it was a way for him to get and education and support his country.

In his first tour in Iraq, he worked as a combat engineer dismantling roadside bombs. He believed he was saving American lives and helping the Iraq people. After returning home, he volunteered for a second deployment, only to be killed by a roadside bomb.

"He really felt what he was doing was helping the Iraqi people. He had a lot of bad experiences the first time, but he had just as many good experiences," Bevington said. "He was very proud of what he was doing. He would never tell you that to your face, but you could see it in his eyes."

Before his second deployment, Bevington purchased a 2002 cobalt blue Ford Mustang. Now, it sits in his brother's driveway because neither he nor his mother has the heart to move it.

Chuck Bevington doesn't like what he calls the politicizing of the troops.

"The last thing these men need are people second-guessing what's going on," he said. "That's something for the history books to decide whether it's right or wrong."

"If they end it right now, they're going to make it worse then it ever was."

Hawthorne isn't waiting on history's verdict. She's bitter about a military she said enticed her son with promises of money, then sent him to a war based on a lie.

"When they came and told me he was gone, oh my God, it just crushed me," Hawthorne said. "There was actual pain in my heart. It felt like someone was in there just ripping it apart."

When her son's first enlistment was nearing an end, before the Sept. 11 terrorist attacks, Hawthorne said he decided to re-enlist, partly because the signing bonus of more than $10,000 would help pay his bills. At the time, he was facing $600 in monthly child support payments from his failed first marriage.

When he deployed to Iraq, his sister said, he had money saved and planned to go to college when he got out of the military in 2005.

Instead, he died in Iraq in 2004 when his tank overturned.

Hawthorne said the military gave her $4,000 for his funeral, but it wasn't enough to cover the $14,000 expense. The funeral home forgave the rest, and neighbors collected $400 to help her get by.

"You don't see anyone who has money putting their children into the military," she said. "I'm all for our soldiers. Without them our country wouldn't be where we are today, but this war just doesn't seem right. Like the Vietnam one. It's not right."