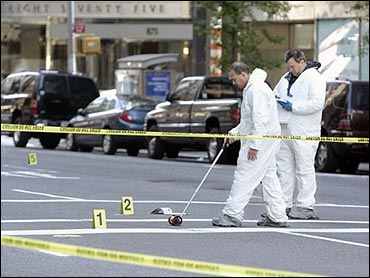 Police spokesman Noel Waters said the grenades had been placed inside a cement flower box outside the front door of the midtown Manhattan building that houses the consulate.

"We do not at this point have any idea who did it or a motive," Mayor Michael Bloomberg said.

The consulate is on the 9th and 10th floors of the building, the mayor said. He said he expected it would be open for business later in the day.

After piecing together the shrapnel, police determined the devices were toy grenades that had been filled with black gunpowder. Officers estimated that one was the size of a pineapple; the other the size of a lemon.

The blasts shattered a panel of glass in the building's front door and ripped a one-foot chunk from the planter. The department's bomb squad was at the scene and streets were closed in the area.

The NYPD has cleared the streets and are using bomb-sniffing dogs to check for any other explosives just as a precaution. They have not found anything yet, reports Cobiella.

Offices of other foreign diplomatic representatives were checked as a precaution and nothing was found, Kelly said. Security videos in the area were being reviewed, he said.

The 14-story glass and metal building, on 3rd Avenue at 51st Street less than a mile from the United Nations headquarters, has retail shops on the lower level.

The closure of streets around the site caused some rush hour disruptions.

In London, Britain's Foreign Office said there were no provisions for Britons to vote at overseas consulates. No further information was immediately available, the spokesman said. Calls to the British Embassy in Washington went unanswered early Thursday morning.

Britain's national elections have been dominated by anger with Prime Minister Tony Blair's support for the Iraq war.

CBS News Correspondent Steve Holt reports that top officials in Britain have been warning for some time that election day might prove a tempting target for terrorists. But security expert Bob Strang told Holt that the explosion in New York may not be what the police were fearing.

At this point, the NYPD is at the very beginning stages of their investigation, Cobiella added. She noted that there are several other offices within that building housing the consulate.

Holt said that there's no indication of the blast affecting voting in Britain.