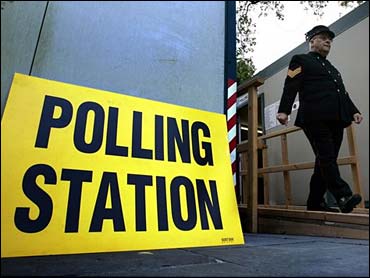 Voters cast ballots Thursday in Britain's national election, a heated race in which Prime Minister Tony Blair's fight for a third term could be hampered by public anger over the Iraq war.

Although Blair's Labour Party is expected to win the election, anti-war sentiment could keep him from securing the landslide victories he won in 1997 and 2001.

Meanwhile, New York police say two toy grenades, altered to explode with gunpowder, blew up at 3:50 a.m. local time outside the British Consulate in midtown Manhattan. No injuries or claims of responsibility were reported; there was slight damage to the building.

"The fact that the explosion happened today is seen as significant," reports CBS News Correspondent Steve Holt in London. "In discussing times that Britain might be vulnerable to terrorist attack, police officials here have singled out today's general election" as one of those times.

Few expect Blair's main rival, Conservative Party leader Michael Howard to become prime minister, but the Tories could pare back the number of seats Labour holds in the House of Commons. Blair's party had a huge 161-seat majority in the outgoing legislature; the new house will have 646 members.

If Labour's majority shrinks significantly, it could badly damage Blair, who would wield less power than in his first two terms and lose standing within his party.

Blair has said that if Labour wins he would serve a full third term but not run for a fourth. Observers have speculated, however, that he could hand power to his Treasury Chief Gordon Brown midterm if he is badly weakened in the election.

Turnout in the race could be crucial. The last general election in 2001 saw a turnout of 59 percent — the lowest since troops returned in 1918 at the end of World War I.

This year's brief but hard-hitting campaign has exposed the depth of Britons' anger at the prime minister, whose formidable political skills once charmed voters who saw him as a fresh face of change after 18 years of Tory government in the 1980s and '90s.

Blair's decision to commit the country to war in Iraq and his centrist stance on domestic issues — including plans to partly privatize some public services — have infuriated many within his own party.

But he has benefited from the Conservatives' even greater unpopularity, and a perception that the opposition is less capable of handling the economy.

"It's a Labour-despite-everything victory," predicted Philip Cowley, a political analyst at Nottingham University.

Even more damaging for Blair, Cowley said, "This time they will win despite him."

If Labour lawmakers see it that way too, it could mean a quicker exit from power than Blair would like, even if the party wins Thursday's vote. Brown is eager to succeed him as prime minister and could press for a midterm handover if Blair is seen as responsible for a big loss.

"If you value it, vote for it," a Labour slogan said.

Blair has warned anti-war Labour stalwarts against casting a protest vote for the Liberal Democrats, saying that could pave the way for a Tory victory.

Howard headed a focused Tory campaign, pounding on just a few issues — tightening immigration, cutting taxes, cleaning up hospitals. Although Howard supported the Iraq war, he attacked Blair, accusing the prime minister of lying about intelligence and the legality of the invasion and lacking a plan to win the peace.